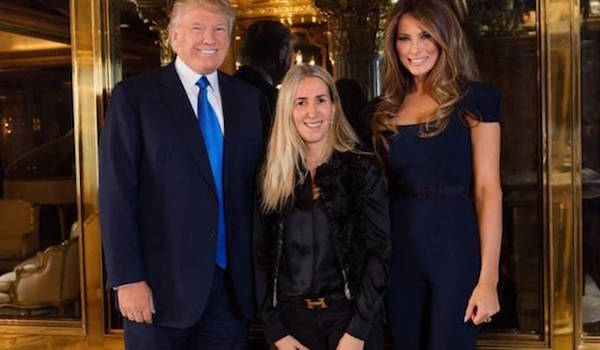 There are few people who can call Donald Trump by his first name without adding “the.” Régine Mahaux is one of them.

Originally from Belgium’s Liège province, Mahaux began working with the Trump family five years ago, when her agency—the esteemed Getty Images—offered to paint a portrait of the billionaire’s family. She had no idea that she would one day be working for a political phenomenon.

Mahaux has since had the opportunity to immortalize the Trumps repeatedly and did a series of family portraits in the beginning of the presidential campaign, and now again taking Melania Trump’s official portrait as First Lady, with the help of her brother Benoit. In our March 2016 interview, she discussed her experience with the Trumps. “I like working with the family’s image—it speaks to me, it inspires me. I have a lot of freedom and responsibility. They let me express myself as an artist,” said Malhaux. “The Trumps are far from the people I see in the press. They are very hardworking and always take things seriously. I know that the European press is very hard on Donald Trump—I don’t know if it’s the same in the United States. They attack him with a lot of things I just don’t see.”

Malhaux is one of the few people to have privileged access to the man (and now president) who turned the 2016 presidential election on its head with his thunderous declarations and provocative rhetoric. Since the beginning of the campaign, Trump has called for a ban on letting Muslims enter the U.S., for the retaliatory killing of the families of terrorists (a view he has softened on since), and building a wall along the U.S.-Mexico border to curb illegal immigration and the trafficking of drugs. His opponents call him a crook, racist, and Islamophobe. He has insulted so many people that the New York Times took sadistic pleasure in compiling a list of the 202 people, places, and things that have been victims of Trump’s vitriolic Twitter account—including the Oval Office and Amazon.

And yet, he is still the President.

The Belgian wouldn’t publicly say if she shares Trump’s politics. “I don’t do politics—I serve the people who entrust me with their image. I’m an artist. Who am I to decide? The Americans will decide who they want to be President of the United States. I like him as a human being. His policies, I can’t judge.”

Choosing to hire a foreign working might be a surprising move in view of Trump’s nationalist, anti-immigration stances, but for Mahaux—who has shot everyone from Salma Hayek to Marianne Faithful, and Prince Albert to Christina Aguilera—it’s a primarily artistic choice. “Although the Trumps are an American family, they have very European blood. He married European women and susceptible to a certain aesthetic. But maybe it’s because I drew that out a little, too.”

While shooting the family, Mahaux learned to tame the Trumps, especially Melania, wife of the Republican spitfire, who she calls, “a strong woman, hardworking, generous and kind, who speaks five languages. He’s certainly a provocateur, but she’s not like that. She’s in his shadow, but she has the same power. She’s sublime.”

Trump may have dubbed Brussels a “dump of a place” where Muslims have failed to integrate, but it would take more than that for the Belgian to speak ill of “Donald.” Malraux is actually quite complimentary of Trump: “He’s rooted in this century—the other politicians are still in the last one. They don’t understand. They are politicians, they don’t know the real world. Donald Trump has never said he was a politician. He wasn’t in it a year ago—it’s new to him. He does this like he does everything: with enthusiasm, envy, arrogance, perhaps, talking about problems without the jargon. He’s a phenomenon.”

Even Trump couldn’t have said it better himself.