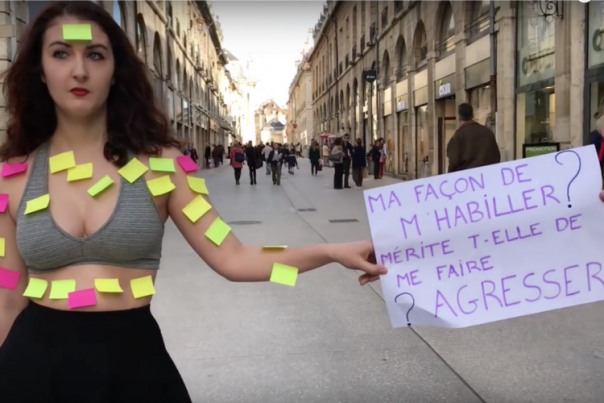 Lost in Translation: Rape Culture at College in France

In the United States, it has been called a national plague. The French would call it a fléau. Carriers of the plague show up on campuses around the country: most recently in the spotlight was Brock Turner, rapist on the Stanford campus.

The 2007 Campus Sexual Assault study, conducted in two major public universities, reports that one in five women are victims of sexual assault in college, as well as one in sixteen men. Like all studies, the methodology needs to be taken into account, as does the risk of a non-response bias. Despite this, the numbers are telling and cannot be ignored: college rape is a grave nation-wide problem. Whether it’s in the news, in Jon Krakauer’s Missoula, or in Joe Biden’s speeches, the plague is on everyone’s lips but no one has found the cure.

When Americans look an ocean away, in France, what they often see is a depiction of romanticized, liberated sexuality. One-night stands in France are commonplace, we often read, are fully embraced, and can even lead to wedding vows and happy families. Unfortunately, the stereotype doesn’t depict the full scope of reality when it comes to sexuality, and sexual abuse. An estimated nine individuals are raped every hour in France according to 2014 data. Plagues have been known to cross oceans: is college rape a French fléau, too?

Véronique Le Goaziou is a French researcher and sociologist with extensive experience studying both sexual assault and French youth. Young college-aged women are statistically the most at risk for rape, she explains in a phone interview, yet we don’t have any specific data on the physical place where sexual assault on these women takes place (at school or elsewhere). Sexual assault in college environments hasn’t been the focus of studies in France, however Le Goaziou mentions that some issues arise specifically in school- and college-aged youth when it comes to rape.

Rape as a “rite of passage” is very much a reality in this age group, where individuals begin to discover sexuality and the conflicting feelings and social pressure that go along with it. Group rape, in particular, is very much a problem in France. Going further than the facts, Le Goaziou’s research has uncovered the relationships these teenage perpetrators have towards sexuality. A striking fact described by Le Goaziou is “how complicated it is for these teenagers to put words on their sexual desire, and just how much they don’t want anyone to know about it”. The romantic vocabulary linked to sex, an overseas cliché of French love, is something of the past in younger generations, with devastating consequences.

Equally as distressing as in the United States is the frighteningly high number of sexual assault that goes unreported. An estimated ten percent of rapes are reported to authorities in France, although campaigns against sexual assault are at their highest. Just as Krakauer denounced the justice system in best-selling Missoula, for Le Goaziou, a possible link between this low number and the endless, painful judicial procedures after a report of rape shouldn’t be dismissed.

Rape is a plague everywhere, and France is no exception. College rape, however, doesn’t seem to garner as much preoccupation as it does in the United States. Several factors could play a part in explaining why France seemingly doesn’t have the same problem. French higher education isn’t organized in self-sufficient campuses the way American colleges are: when campuses exist, they are often near a larger city and count fewer students than their American counterparts. In France, college students tend to live at home, in independent apartments, or in student housing that is much smaller and integrated into the urban landscape than dorms in the United States. French colleges don’t have a Greek system: schools have clubs – where hazing is a problem, especially in medical, engineering, or business school – but club members live separately and sleep outside of club quarters.

The simple non-existence of a community of young adults who live together, eat together, study together and sleep together makes the notion of college rape different in France. Rape in this age group remains prevalent, but it is not classified as “college rape” since it may be rare on school premises. Additionally, American colleges have a particular social hierarchy that French universities do not. Sports players are the demi-gods of American campuses and rape cases that involve them, when they come to light, get local and national attention – with little thought given to the victim’s situation. No such status exists in French universities, so media portrayal and treatment of the case by authorities differs.

The particular ‘status’ of college rape might not have an identical twin in France, but both countries share the all-too-common assumption that victims have some sort of responsibility. In the United States, the alcohol intake of victims comes into question when it should not; in France, the victim’s choice of clothing comes under harsh criticism. A recent study shows that for over a quarter of the French, a perpetrator of sexual assault is less responsible for his crime if the victim was wearing a ‘sexy’ outfit.

A group of nine young women from Dijon Business School set out to illustrate the study’s findings in the streets of Lyon this past spring. Two of them stood on a busy street, both wearing skirts, one wearing a more demure top than the other. “Does my outfit make me deserving of assault?” read a sign, as passersby were given the opportunity to stick a Post-It note on the young woman they would answer “yes” to. As the girl in a bra top and skirt became covered in neon-colored sticky notes, the message became clear: individuals tend to judge responsibility in sexual assault on factors that should never come into play.

For Camille El-Batal, one of the nine students, rape in college isn’t a specific situation she has been confronted with in her peer group. Constant catcalling and everyday sexual assault, however, is. “Our video was an eye-opener for some”, El-Batal says, “but we do realize that it isn’t a long-term solution.” The group of students hopes to work with the national education service to put a sexual assault prevention program in place for middle school and high school classes, and most importantly to listen to what teenagers have to say when it comes to sexuality and rape.

Helping young adults put words on sexual assault may be key when it comes to preventing sexual violence and encouraging speaking out. In France, eighty percent of victims knew their assailant prior to the assault. That is something worth putting words on, whatever the country, whatever the language.