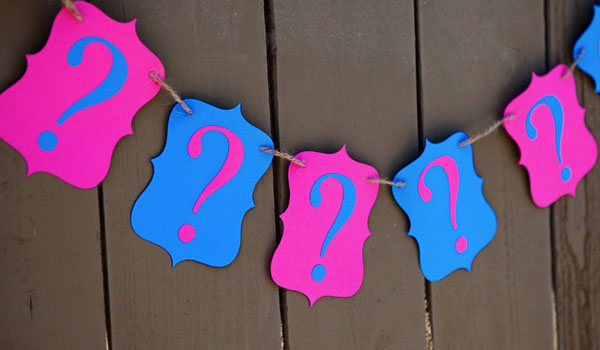 French Morning’s English Edition has an announcement: we’re pregnant in Paris! Well, this writer is, anyway. Month by month, you can follow my trek through the quirks, surprises, and reliefs of having a baby in the land of all things unpasteurized. This month, I discover how some names just don’t work in French, and more. Chime in with stories of your own! And catch up on our previous installments if you haven’t already.

Well, here it is—the long-awaited moment of finding out whether that miniscule little thing moving inside will be wearing dresses or dress shirts. Here in France, the trend of keeping the mystery alive until the moment you push that human being out of your body is alive and well, just like in the United States. “Do you really want to know?” they ask. I smile politely and answer that, yes, I’m just so excited to find out. In reality, this politically correct answer thinly veils my true intentions: “Are you kidding me? Winter sales are coming up, and there’s no way I’m buying taupe and grey for the next four months.” I had to know, if only to give into dreams of buying gold polka-dotted sweaters or ridiculous superhero onesies.

It’s a girl! Cue excitement overload, pink and purple balloons everywhere, ‘It’s a Girl!’ plates and confetti cakes. Right? Oh, sorry, that was the American gender reveal party I just read about. In France, it goes something like this: besides close family, everyone greets the news with a happy smile and a subdued excitement about buying cute clothes. That sounds about normal, doesn’t it? Why should anyone (but myself) be reacting like they just got the last front row tickets to see a Destiny’s Child reunion tour? If the baby is in good health, who really cares whether it’s a he or a she?

I tell my French friends about gender reveal parties back in the United States. A quick search on Pinterest draws up more mood boards than a taco bar at a countryside wedding. Nobody knows–the suspense is incredible–until… until the cake is cut open! Blue batter or pink batter! Some even throw in some colored sprinkles in the center for an extra hit of gender reveal sparkle. I ask my husband if he thinks we could do a balloon drop, like at midnight on New Year’s Eve, with huge helium balloons and a hip-hop rendition of No Doubt’s “I’m Just a Girl.” Being very French, he brings me back to reality, reminding me that nobody really cares here. And they’re probably right not to.

If revealing a gender isn’t a big deal, the choice of names makes up for it in importance. The France V. America situation gets completely flipped over. Back in the States, many don’t even attempt to ask what the name will be (superstition? politeness?) and if they do, they sure don’t delve into a critical analysis of why the name sounds a little bizarre.

Over here, even before I knew the gender, everyone wanted to know if I had a list of names set. I’m not superstitious, so I was happy to share my number one choice for a boy’s name: Otis. I had to kick myself to be reminded that the future father had completely vetoed my choice, but hey, forgive a girl for wanting to share her favorite when people ask. Reactions to my enthusiasm for Otis came in all different shapes and sizes:

An inquisitive frown. “Huh.” Those were the easy ones. Then came:

“Otis, like the elevator company?” (A large majority of reactions.)
“You’re in France. It sounds weird here.”
“Otis, like autistic?” (In French, autiste sounds pretty much exactly like the way French people say Otis.)

I’ll gladly admit I was testing the waters with Otis. I wanted to see how everyone would react. If everyone was so outspoken about a name that, in the end, I wouldn’t choose, how were they going to react when I told them the actual name? It turns out whether it’s the actual name or a fantasy name doesn’t change much. Opinions are expressed freely: France is a country of debates, discussion, and disagreements, whether you’re bringing up national security or baby names. I learned to live with it… and a tiny bit of anticipation at whether my choice of name brings a smile or a frown. You’ll find that out later.

So, it’s a girl. What’s next? Unabashedly, I gave in to shopping for baby’s first clothes. My approach was decidedly un-French, aided in my new addiction by my sister. Having gone through the same process less than two years ago, with the boy version of things, she was preparing me to shop until I dropped (not literally, with the whole being pregnant thing). She has a list–I call it the Master List–detailing every single thing a future mother and future baby could possibly need. Count on her to be up-to-date on the latest worldwide safety standards for clothing, bottles, and bedding.

As she walked me through French baby outfitters, I learned to gasp at how everyone sells crib bumpers, which I didn’t even know were a thing, and are apparently a pretty big safety hazard. I learned that diaper bags aren’t as cool over here—or is that because the French just don’t really bother with diaper bags? Either way, having a baby is having a baby wherever you are in the world, but the United States sure makes it easier to shop for them, unless your budget is more Bonpoint than Gap Kids. In the meantime, Americans marvel at the epitome of French baby brands that is Petit Bateau. All right: one point for France and nice kid’s clothes.

As leggings, onesies, and socks piled up in my online shopping cart, colleagues detailed that they bought the bare minimum for their babies, and it worked out great. I felt a pang of guilt for adding a fawn and a duck t-shirt to the cart… until it disappeared, and I went back to happy clicking. Remember the winter sales France is known for? Yes, those. I’m really just doing my part for the French economy. I remind my French friends that in English, there is a mainstream name for me stockpiling clothes and baby gear: nesting. If there is a name for it, it’s legitimate, I tell my confused husband. He doesn’t get it: I used to wait for winter sales to buy glassware and kitchen knives, and here I am going crazy about bibs with funny cats on them. He’ll get it soon enough…won’t he?

Next month: getting ready for the big arrival, à la parisienne. Stay tuned!