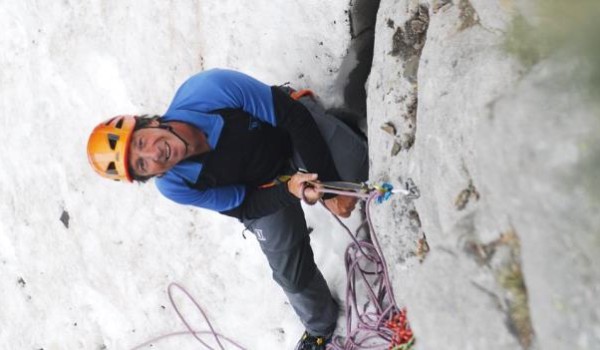 From Perpignan to New York: From the Mountains to the Concrete Jungle

“New York will be my Everest”. Somewhere in the Pyrenees, Philippe Pellet dreams of his ultimate goal: New York, the city of giant skyscrapers.

His dream remains just that. At least for another two months. The former mountain rescuer is slowly but surely inching closer and closer to his dream. Having left on May 31 the train station of Perpignan, that Dali called the cosmic centre of the Universe, accompanied by two colleagues, he is progressing on foot towards the Atlantic via the Pyrenees’ ridges.

When we interviewed him on Thursday, he was in the Basque Country. The next big step of his adventure is Hendaye where he will board his small sail boat to then cross over to New York.

At the end of his odyssey, Pellet will have covered 700 kilometers in the Pyrenees, reached 600 summits, traveled 2 500 nautical miles and spent 38 days at sea.

“As a rescuer  I saw people who were going to die or whose lives would be changed for ever. I am lucky to still be around. I am bursting with curiosity. I am not doing these things in the name of performance”.

In 2004, alongside genius mountaineer Lionel Daudet, he ventured through a colossal 150 mile loop on the ridges of the Ecrins mountains for over two months.

After multiple expeditions, he returned to Daudet in 2011 to walk between the Mont Blanc and the Léman lake in Switzerland.

“When I worked, I saved thousands of victims and witnessed hundreds of deaths. The mountain was my workplace and my playground. It remains an environment in which I love to operate.”

A carpenter by trade, the 52 year-old mountaineer is not doing it alone. Although he has funded the trip alone, he is also supported by multiple artists who have created artwork in honor of the project.

He has also sought to involve school children from his area who will follow his progression when he attempts to cross the Atlantic.

How are things going so far? Well, he says. Even if one of his team mates has had a change of heart, he tells us that “I am in a really good place. Nevertheless, one needs to remain vigilant and stay on the ridge at all times. Even if I am not in this for the performance aspect, I need to remain level headed. To a certain extent, I need to keep a warrior mentality.”

On the way, this mountain warrior has had a few pleasant encounters with “shepherds and refuge guards” he says “We relax. We free ourselves from what is known. We always live in the moment, like zen masters.”

Once in New York, will he stay like that among the honking and the noise? “When you compare it, New York is on the same parallel as Luchon in the Pyrenees”, says Pellet, never ceasing to remind us where his heart lies.