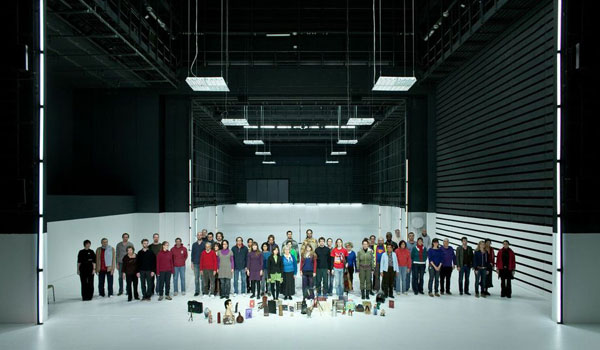 Iconoclastic French playwright/director Pascal Rambert decided to create “a (micro) history of world economics” because he knew nothing about economics.

Spurred on by the economic failures in Europe and the subprime mortgage crisis in the United States in 2008, he began exploring the reactions of ordinary citizens, establishing writing workshops where they could reveal their experiences. He brought them together with professional dancers, a choir and a spoken economic history provided by philosopher/economist Eric Méchoulan from the University of Montréal to perform this revelatory, often wrenching theater work, which will be performed tonight through Sunday at La MaMa, Ellen Stuart Theatre (66 East 4th St., NYC). “People mix with no problem,” he says. “My work is based on trust. I trust people. And when they understand that, their performance turns into a pleasure.”

Rambert began the project in 2010, premiering the work at his theater in Gennevilliers, and since then he has produced ten versions throughout France and Germany, now bringing it here to New York and Los Angeles, to add Americans experiences to those of Europeans. His sympathies lie with those without control over their fates, among them families evicted from their homes, who found they could no longer pay their bills. “Traders were making money from not well educated social groups,” he says. “Traders had found a way to make money out of poverty. I wanted to examine the multiple ways possible to think about exchange and economics.”

So far over 500 people have participated in his projects, and he doesn’t plan to stop producing them. Having discovered that ordinary citizens are concerned about economic events and want to make a difference, he will continue aiding them. “I mix philosophy, economics, bodies, songs, acting, lights, colors, dance,” he says. “A possible world. The desire for utopia is, thank God, still keeping the planet alive.”