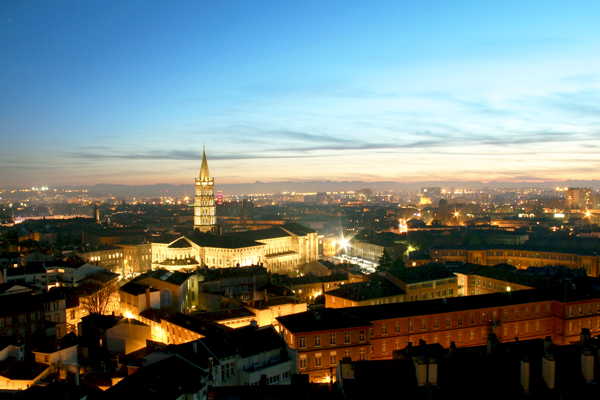 Toulouse—also known as La Ville Rose (“Pink City”) for the number of pinkish, terracotta buildings in the town—is France’s fourth-largest city and the capital of the Haute-Garonne départment and the Midi-Pyrénées région.

Aside from having the fourth-largest population, Toulouse also has the fourth-largest student population in the country and is home to the Université de Toulouse (one of the oldest universities in Europe) and one of the nine campuses of Sciences Po, among others. It’s also a key part of France’s aerospace industry and home to the main Airbus factory and the continent’s largest space center. Even the Toulouse-Blagnac airport ranks as one of the busiest and most dynamic in Europe.

The city is bisected by the Garonne river, with its own Pont Neuf transversing it and its own version of Île-de-la-Cité—Île d’Empalot—in the center. But for all it has going for it, Toulouse tends to get forgotten as a tourist destination in favor of smaller cities with bigger names like Nice and Bordeaux, Toulouse’s distant neighbor on the Garonne. Let’s take three days to change that:

Installed in old and surprisingly picturesque slaughterhouses in 2000, Les Abattoirs is Toulouse’s museum of modern art, with a huge schedule of temporary exhibitions of the finest in contemporary art across multiple mediums, all set along the left bank of the Garonne.  It’s also a twenty minute walk from the Musée des Augustins, the city’s former Augustin monastery turned fine art museum, with a fantastic collection of works by French artists, including the eponymous Toulouse-Latrec, Delacrois, Monet, and other artistic heavyweights. The museum also has a beautiful cloistered garden—as you might have expected—from the 14th century.

While it may be a theme park without any rides, the Cité de l’Espace is nonetheless a visual wonder, giving visitors a full-scale view of some of the Space Age’s greatest creations, from Soyuz modules to the Ariane 5 rocket to an actual full-scale recreation of the Mir space station. There’s a Base des Enfants for children, the [email protected] with its comprehensive history of space-time, the Stellarium planetarium, and even an IMAX theater showing the latest and greatest in immersive space cinema.

Once used to augment shipping between the Mediterranean and central France, the Canal du Midi is today mostly a waterway for tourists looking to enjoy a leisurely boat ride away from Port de l’Embouchure in the city center to points along the 150 miles of canal between Toulouse and the terminus in the Étang du Thau in Sète, just south of Montpellier. It’s also a gloriously idyllic place to walk beside on a lazy spring afternoon.

Since we’re in Toulouse, it’d be criminal not to sample some of the local cuisine, a feat made insanely easy by La Cave au Cassoulet, where they offer—you guessed it—a menu of regional cassoulet filled with fine sausage, not to mention an eminently reliable foie gras.

For a culinary trip down the canal, L’Ouverture Restaurant Musical serves up the city’s best Italian and Mediterranean fare in a cozy, intimate space, with homemade meals crafted under the judicious eye of its husband and wife owners. They offer a seating for a menu de Syracuse, with dishes and ingredients brought in straight from the Sicilian port city, and even a musical apéro hour with live performances and a selection of charcuterie and bruschetta.

Toulouse has enough variety in its bar scene to cover any and all comers, but for a college town, Chez Ta Mère is a venue worth visiting for its live music scene, which gives way often enough to shows by theater and improv troupes (although not enough of the latter to really put you off). The ambiance is convivial as hell, the clientele is vivacious, and the furniture is bonafide Brooklyn.

The stupendously weird wine bar Dada is like being thunked over the head with Lewis Carroll book and waking up somewhere between pages 100 and 200. From the wallpaper to the porcelain pieces, it’s an aesthetic that’s guaranteed to heighten the effect of whatever you’re drinking, which, by the way, is probably something from a wide selection of red and whites or one of Dada’s classic cocktails.

If you’re feeling a bit étrange, you’ll find yourself in good company among the ex-pats of Le Dubliners, the surprisingly bog standard Irish pub in Toulouse that’s all the more unique for its environs. You’ll get your perfectly poured Guinness, of that you can be sure, in an unusually large space with a façade so ostentatious that only the hours listed in chalk give you the fainted impression of being in France.