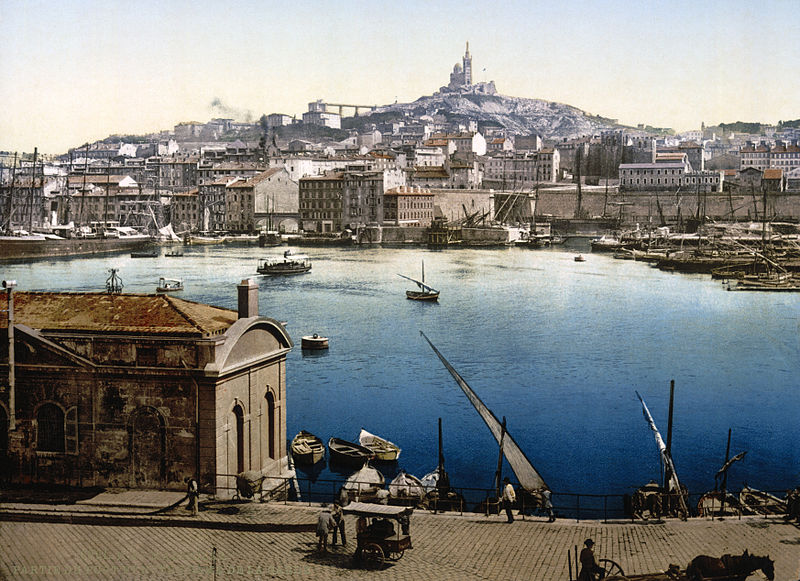 Pas Paris: Marseille, a Lively City on the Mediterranean

There’s more to France than its capital city. If we’re going to shrug off the largest metropolitan population in ol’ Gaul, though, we might as well take baby steps and head for the second-largest city in the Fifth Republic, the Mediterranean port city of Marseille.

Marseille is a tricky place, a truly ancient port city on the French Riveria, where over the centuries the question “How far is it to Italy?” has changed from era to era. It is the second-largest city in France and the largest in the région, with a hefty 350,000 more inhabitants than France’s third-largest city, Lyon.

As one of the most important ports in the Mediterranean throughout the millennia, Marseille has experienced wave after wave of immigrants, making the city both truly cosmopolitan and deeply ethnically diverse. In the twentieth century alone, waves of Russians, Greeks, Spanish, Armenians, Corsicans, Algerias, Comorians, Turks, Vietnamese, Chinese, and other nationalities have made their way to Marseille. In fact, a third of Marseille’s inhabitants are of Italian descent, speaking to the undulating borders of the Riveria and the preeminence of Marseille through the years.

The city has attracted film productions from The French Connection to the (non-Queen Latifah) Taxi series to Love Actually to the Bourne Identity, and while the city is far too ancient to list the books that take place there, it’s worth mentioning that a fair slice of The Count Of Monte Cristo is set in Marseille.

But what about today’s Marseille? Where to go? What to do? Where to eat and drink? Leave that to us:

Marseille, like many European cities, has a lot to offer that requires not one centime from the traveler. You can stroll through the Vieux Port and watch fishermen sell their stock and boats come in; you can sit at Notre Dame de la Garde and enjoy the view of the city as it slopes to eye level with the sea or get a closer look from la Corniche, a seaside walkway with sprawling vistas of the Mediterranean and the gloomy Chateau d’If; you can walk through the Parc Borely and the ancient Le Panier district; you can amble through le Cours Julien and browse books, people-watch, and take advantage of the morning shopping at La Plaine on Thursday and Saturday mornings.

Once the free stuff has had its day, there are a fair few museums worth a visitor’s time. The MuCEM (Musée des Civilisations de l’Éurope et de la Méditerranée—now you know why they invented the acronym) has, as its name suggests, is dedicated entirely to the culture and history of the region, the sole museum so dedicated, and includes the Fort Saint-Jean, the fortress built by Louis XIV to guard the entrance of the Vieux Port.

To dig deeper into the considerable history of the area, the Musée d’Archéologie Méditerranéenne and Musée des Docks Romains explore the oldest stories and origins of Marseille and its environs, right back to the Phoenician and Roman eras. The Musée d’Histoire de Marseille is also a treasure trove of local historic artifacts, and the Musée des Beaux Arts gives a slightly letter tattered view of the cultural heritage of the city with a collection of artworks ranging from the 16th to 19th centuries.

As with most port cities, the cuisine in Marseilles in decidedly biased towards seafood, particularly local heavyweight bouillabaisse. No matter what origin story you buy into—Venus making the soup for her husband, Vulcan, and Greeks bringing kakavia to the French port city six hundred years before the birth of Christ—bouillabaisse is, indisputably, a typical fisherman’s solution to the problem of unsellable fish: make a stew. Like any slow-cooked peasant food, bouillabaisse has ascended from its origins as a way to make cheap meat tasty to a contentious and prized local specialty. But where to get proper bouillabaisse is as contentious as its origins—some believe that the only authentic way to experience the dish is by being invited to the home of some Provençal native, who grew up watching their mother cook the stew and has spent their entire life adhering to the family recipe.

Luckily, in 1980, a group of marseillais restaurateurs convened to draw up a charter outlining the absolutely essential ingredients and methods of cooking bouillabaisse, and the signatories to the charter circumscribe a shortlist of best-bet spots to sample the local dish. One of those restaurants—Le Marimar—went so far as to register bouillabaisse.com, which redirects straight to their website. La Réserve is also a member of the charter, although it is unfortunately not that La Réserve.

No one’s tying you to the mast of the good ship Seafood, and Marseille has more to offer than just bouillabaisse. For French fare of the Provençal variety, L’Arôme is at the top of the list, an inland restaurant that is the height of Mediterranean hospitality and serves a menu of authentic dishes from “autodicact” chef Romain in Notre Dame du Mont.

For predominantly Mediterranean cuisine, Chez Ida does the trick, with a formule midi that won’t break the bank and may include dishes like a pesto salmon, veal Grenadin in cognac sauce, cassoulet d’aubergines parmesane, or goat cheese ravioli in tomato basil sauce, to name a few. If you stay away from the heavier selections, you’ll be in fine fettle to participate in the restaurant’s karaoke nights!

As for Italian, there’s Venetian dried meats, bufala mozzarella, and tiramisu at La Table de Casimir, a fusion restaurant with a propensity towards over-plating dishes that require not finishing touches to be worth the price.

Unless you’re planning to while away your nights doing karaoke at Chez Ida—and we wouldn’t judge you if you were; but the gods of the sea might very well judge you for it—you’re going to need somewhere to drink once the sun goes down.

Le Vieux Port necessarily has a sailor’s fantasy worth of nightclubs, some good, some bad; it’s certainly hard to tell one from the other, as both sorts of dance clubs are, at best, still dance clubs. If you’re looking for a tour guide’s version of a European club, go to Le Trolleybus; when you run screaming out of it later, take a stroll east on quai de Rive Neuve to Maxi Club to dance or laugh at people or Le Quai du Rire to laugh at people who want to be laughed at.

For that cluttered, dive bar experience, Le Pelle-Mêle (also on the quai) features a laid-back vibe and live jazz music, or head inland to Palais-de-Justice and Carry Nation for cocktails that would make this actual speakeasy’s namesake radical temperance advocate herself (who went by “Carrie,” it should be mentioned) need a drink.

Carry Nation
Somewhere in the vicinity of rue Jules Moulet.
+33 09 50260166
Seriously, you actually have to call or email the bar to get in.
Website