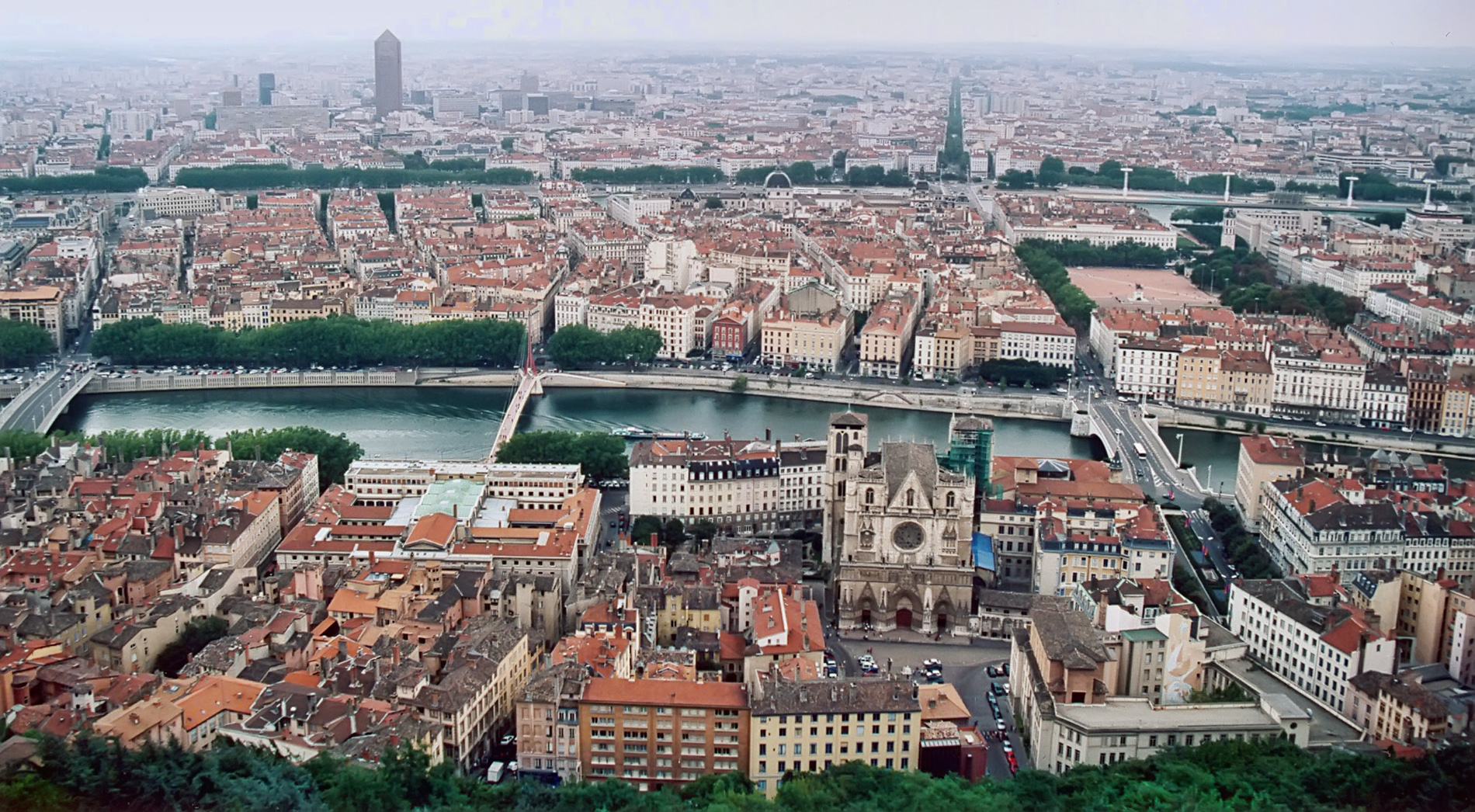 Lyon is France’s third-largest city, situated in the southeastern région of Rhônes-Alpes at the confluence of the Saône and Rhône, about 200 miles north of Marseille on the A7. Perhaps more than even Marseille, Lyon is a Roman city, full of the vestiges of the empire’s glory days before the 5th century CE when, as usual, Goths ruined everything. The city is divided into nine arrondissements and looks, believe it or not, like the five boroughs of New York plus metropolitan New Jersey. Seriously, look:

On the New Jersey side is Vieux Lyon, the oldest part of the city (naturally), right on the bank of the Saône, with Fourvière Hill—”the hill that prays”—just east of it. Lower Manhattan is the formerly industrial and slowly more up-and-coming district of the Confluence, and Upper Manhattan is the heart of Lyon: Presqu’île. Above that, in the Bronx, is Croix-Rousse, “the hill that works,” and across the Rhône, in Astoria, essentially, is the Parc Tête d’Or and Lyon’s wealthiest area, Brotteaux, just above the beautiful and immigrant-heavy Guillotière and the business district of Part-Dieu, where you’ll find the city’s main train station. Out towards what would be Jamaica Bay is the neighborhood of États-Unis, which fortunately looks nothing like the United States.

The city is connected via a four-line métro—in addition to funiculaires—with completely improbably station names like Sans Souci (“carefree”) and Monplaisir (“my pleasure”).

The Gallo-Roman Museum is as good a place to start as any, filled as it is with artifacts of the old Roman city—including bits of a chariot—and the early Gallic and Celtic tribes in the area. The museum was built into the hill itself, with glass bay doors looking out on the adjacent ancient amphitheaters. It’s a short walk from there to La Basilique de Notre Dame de Fourvière, Lyon’s 19th century church dedicated to the Virgin Mary, who is credited with saving the city from three pandemics: the Bubonic Plague, cholera, and the Prussians. The north tower, when it’s open to the public, offers a commanding view of Lyon, and the dual-churches inside the basilica offer both simple and stunning interiors, as well as a Museum of Sacred Art.

While you’re on the west bank of the Saône, you can stroll through Vieux Lyon, the city’s oldest and largest Renaissance neighborhood, divided into neighborhoods by the closet church. It is, like the Latin Quarter in Paris, an often crowded area, replete with tourist traps, but the experience of walking around a centuries-old quartier that’s been cleaned up as recently as the 90s is worth the hassle of dealing with tourists—after all, you’re one of them!

When it comes to art, there’s both the Musée des Beaux Arts at the Palais Saint-Pierre and the Musée d’Art Contemporain, the latter of which is known for its well-curated temporary exhibitions. For film aficionados, the Institut Lumière is a must-see museum of the cinematic arts and archive of the early days of filmmaking, housed in the home of Auguste and Louis Lumière, the Lyon-raised brothers who were the first filmmakers in human history and invented many of the technical conventions that helped spread the art form across the developed world at the turn of the 20th century.

Across the Rhône, you’ll find Le Petit Carron, a restaurant and jazz spot that offers not only the traditional Lyonnais menu, but also classic and “gourmand” prix menus, featuring everything from filet in cognac sauce with truffles to house foie gras to rack of pig with au jus.

Then there’s the very French, very Lyon L’Argot, where meat is at the center of every meal—possibly because the restaurant is its own butcher shop—serving a sensational entrecôte, a bone marrow starter, and a more than fair selection of fresh fish.

Lyon has a solid nightlife scene that ranges as far and wide as any other metropolitan city— for comedy, Complexe du Rire offers two rooms with a slate of young, talented comedians; for those wishing they could just have a pint of Guinness, there’s Kelly’s Irish Pub.

If you’re—very sensibly—looking for wine, Vercoquin not only sells it from their vast selection of French wines (with a special eye for organic and natural vintages), but also serves it in their wine shop for a small corkage fee.

If you’re looking to dance, then it’s the Terminal Club for sure, with an always-reliable lineup of DJs, a great atmosphere, and a fantastic history of great electronica.