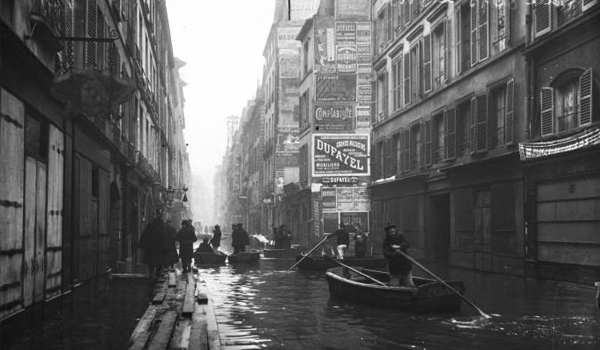 Paris Preparing for Flood of the Century

It’s been 106 years since the last great flood hit Paris in 1910, when the Seine rose more than 25 feet above its normal levels. Now city officials are spearheading a campaign to prepare the city for the next deluge.

The “centennial flood” doesn’t have to happen every hundred years, but there’s a 1-in-100 chance for the flood to hit every year, so the probability generally works out. The city is planning to implements systems that would deal with flooding on the scale of the 1910 Great Flood of Paris, when the Seine rose 8.62 meters, but the system is not yet in place.

Should a similar flood happen, bridges along the Seine would be just above the level of the river, the plaza of the Louvre would have visitors calf-deep in water, and the quais would be a little too moist for afternoon drinks.

The “Sequena 2016” training exercise kicked off today at the Maison de la Radio, with a simulation of a 50cm-per-day rise in the level of the Seine giving authorities a virtual feel for how to cope with the inevitably crippled Métro during a major flood, as well as hospitals closing and potential damage to the grid.

And then there are the rats.

A common problem with urban development is the displacement of rats during construction on a particular building site—a flood would be orders of magnitude worse, with their subterranean lairs flooding quickly and sending the rodents for higher ground.

The Sequena exercise will mobilize nearly a thousand emergency personnel, including 150 police officers and four helicopters, and involved 87 city institutions, both public and private. Even the Musée d’Orsay will get in on the action, taking the opportunity to practice moving their vast collection of priceless artwork to pre-arranged safe zones.