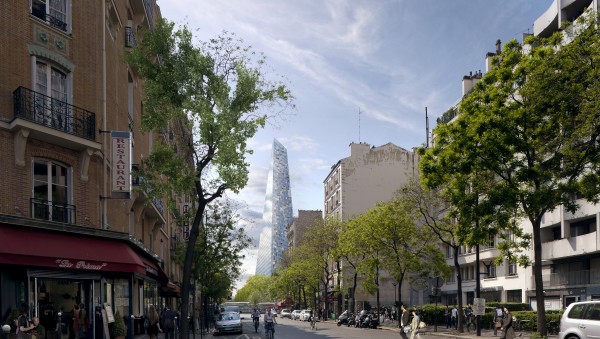 Paris is Crowded, Expensive and Perfect Just the Way it Is

Paris, some say, needs new buildings —  taller ones. Without them the still-vibrant city will eventually become so expensive to live in that it will turn into a monument. So why do so many people — myself included — get choked up at the thought of a new tower in the city of lights?

Just such a project was up for a vote by the Paris city council last month. Artists’ renderings of the Tour Triangle or Triangle Tower show a crystalline structure that echoes the graceful lines of the iconic Eiffel. It’s a beautiful proposal to elevate a neighborhood that is otherwise drab while respecting the skyline so many hold dear. When it comes to these issues, I’m usually all for progress. But this time it’s different.

Paris was the city of my early adulthood. I moved there straight out of college. I know that sounds glamorous because when I tended bar in the summers to the sheer mention of it would have single malt-swilling patrons wondering aloud about their own roads-less-travelled. No surprise: those years were my toughest in terms of survival. I was hungry most of the time and spent nearly all of my English-tutor/babysitting money on rent and travel to and from jobs. But it was indescribably wonderful simply to be surviving in such a singular city.

When I visited the city last month after 7-year absence so much had changed: I’d had 2 kids, moved 5 times and had more career changes than I care to enumerate. A (wholly unremarkable) succession of deaths and divorces in my family and the simple passage of time had me looking back with nostalgia at my early twenties. The only thing that frightened me more than the idea that Paris would not be as I remembered was how much I needed to find it unchanged.

And Paris hadn’t changed. I kept looking for it but the let-down never came. From the Pyrénées metro stop (MY stop for thousands of rides), to the Ile-Saint-Louis (where I had the classiest babysitting gig ever), each corner I turned met me with a familiar embrace. The Place de Ménilmontant was utterly unchanged (am I crazy or were those two elderly Maghrebin gentlemen walking and talking in that exact trajectory 8 years ago?). No modernization. No decay. Paris. Is. Eternal.

I love that about Paris and I’m not alone. A narrow majority of city councilors, echoing the feelings of UNESCO, some 62% of Parisians according to a poll cited in this New York Times article, and all-volunteer groups like SOS Paris, voted against the Triangle Tower. For the project’s detractors, the arguments are subjective: Paris is pretty, it’s special, and they like it the way it is. But I guess in a when a city as beloved as Paris is threatened with a facelift, feelings can actually win.

I can’t imagine this kind of cri de coeur getting much traction in America. I’ve lived in New York, Washington, DC and Los Angeles, and people in these cities seem mostly resigned to the fact that entire neighborhoods are routinely razed to make way for new architecture. As it happens, the no-voters in Paris were so ecstatic about their win they made a show of it by displaying their secret ballots. Paris mayor Anne Hidalgo saw an opportunity to question the validity of the vote and the matter remains open. Paris may yet get its third tower.

But part of me hopes that it won’t. When my family and I were preparing to move from our DC home this summer, I spent a lot of time on the roof of our building looking at the 3 blocks of construction sites next door and the forest of cranes between our place and downtown. I was trying to say goodbye, but it was hard that when I saw my neighborhood again it would look completely different. This is life, I thought, this is progress. Nothing stays the same and that’s a good thing. Nothing had every showed me the contrary — until I went back to Paris.