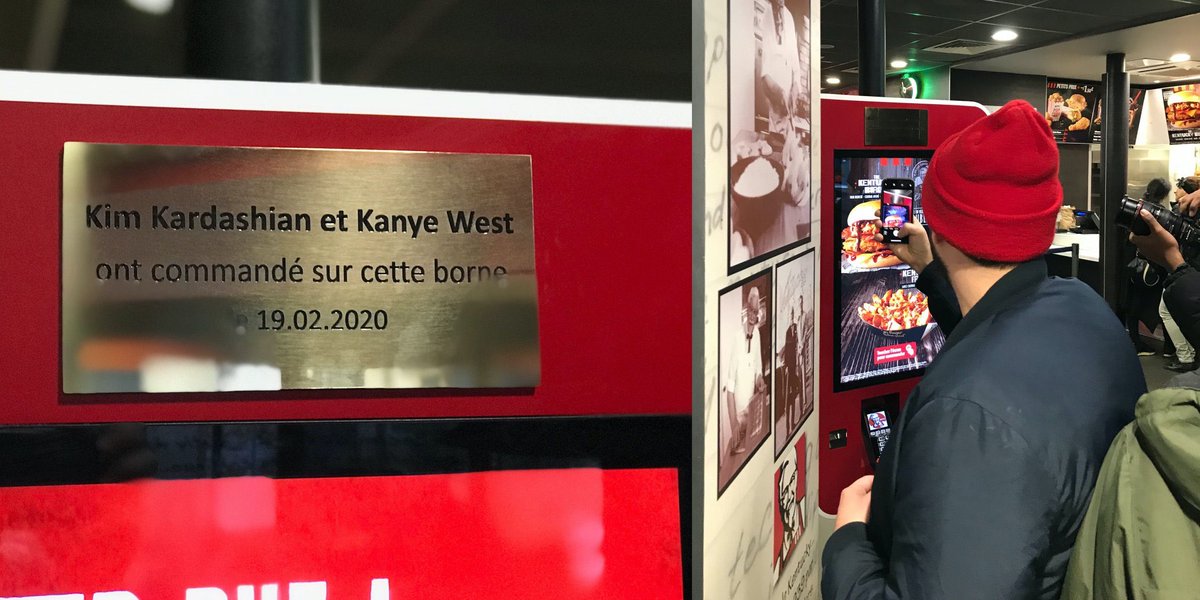 One Paris KFC has turned 15 minutes of fame into never-ending publicity, thanks to a small plaque.

The KFC in the Strasbourg Saint-Denis neighborhood visited by Kanye West and Kim Kardashian West put up a commemorative plaque on the kiosk where the couple ordered a bucket of fried chicken and some fries.

The plaque, which appeared on February 20, less than 48 hours after the American couple visited the KFC on February 19, reads: “Kim Kardashian and Kanye West ordered at this kiosk 19.2.2020.” The message on the actual plaque is written in French.

US Weekly reported that the plaque was a joint move by KFC France and creative agency Sid Lee Paris. “We took the opportunity to thank them for their visit by creating a bucket in their honor and by fixing a commemorative plaque on the kiosk as quickly as we could,” co-creative director at Sid Lee Paris, Clément Mornet-Landa, told Adweek.

The visit to the American fast food chain was made known to the public when West and Kardashian West each immortalized the trip on Instagram. West’s post featured the purchasing of the KFC chicken at the kiosk, and the subsequent consumption of the chicken bucket in the Jean Paul Gaultier offices in Paris. Kardashian West’s post included the same photo and video, as well as some other snapshots of her visit to “JPG.” The high-low contrast of eating greasy American fast food in the office of a revered French fashion designer was just too good.

The bucket was definitely only West’s because Kardashian West is on a plant-based diet, hence why she tells West to add fries to their order in the video.

The custom bucket, mentioned by Mornet-Landa to Adweek, was made especially for West and Kardashian West. In a photo posted to Twitter by KFC France several hours before the plaque was revealed, the design of the bucket was revealed: “Me and my girl split the buffet at KFC,” reads the side. A lyric from his song, “Touch the sky.”

Hey @kanyewest @KimKardashian we created a bucket just for you inspired by our favorite song of yours. For the next time you’ll come split the buffet at KFC Paris… pic.twitter.com/qy9ikhl7Aq

The plaque was a smart move for KFC France. With a permanent marker of a pop culture moment in the store, fans of the American couple are sure to stop by the location in Strasbourg Saint-Denis for a picture. And who knows, maybe they’ll buy a bucket of chicken too.