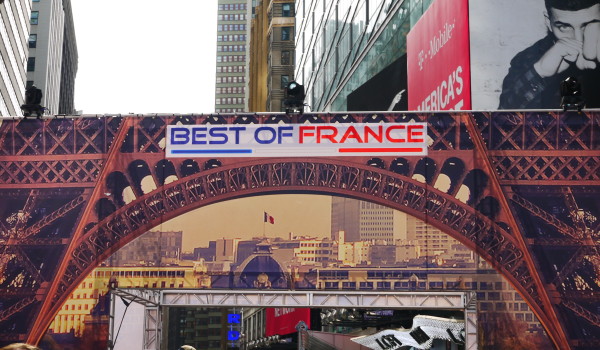 A day after the wildly successful Best of France festival that colonized Times Square for the weekend, organizer Paul Bensabat was overflowing with superlatives. “It’s an extraordinary success, way beyond our expectations. Everyone was delighted and the impact on France’s image is fairly exceptional,” he gushed.

Festival organizers had stated a goal of attracting 500,000 visitors, a number that was “easily reached” according to Bensabat, though a precise count is impossible to come by. What’s clear is that Saturday and Sunday saw streets overflowing with people, many of whom headed for stands offering tastes of Basque cake, Camembert, charcuterie, packages of Norman butter cookies, real French mustard and macarons.

While everyone loves French food, other stands that touted everything from IT to tourism saw plenty of traffic as well. French tech heavyweight Ariane Dassault was there alongside French airlines, not to mention several live shows including with Moulin Rouge dancers, who were performing in the US for the very first time. The fashion element of the festival was also a hit, with attractive displays by French brands and shows organized during the course of the two-day extravaganza.

For security reasons, the entire festival had to be moved, at the last minute, to the southern end of Times Square. As a result an accurate map of specific stands was not widely available to visitors who instead wandered the stands on an exploratory adventure.

French foreign minister Laurent Fabius officially opened the festival with a tricolor ribbon-cutting on Saturday, but highlight of the weekend was surely the sight of French president François Hollande wading through an excited crowd of people, several of whom were excited without knowing exactly who was attracting so much attention.

The festival was an ambitious re-imagining of the “Taste of France” event organized in 2013. “This was much bigger and we had many more participants this year,” says Paul Bensabat. Same time next year, then? For the moment, organizers say they have “no plan.” “We’ll think about that when we have the benefit of a bit of hindsight,” says Bensabat. And probably a few good nights of sleep, too.