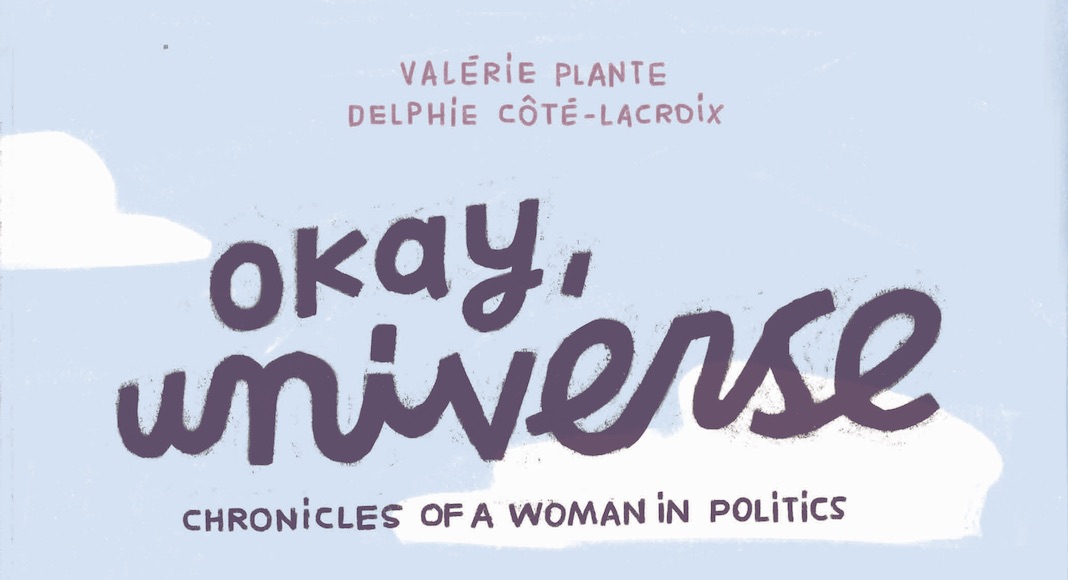 We love a good political memoir, but sometimes, in order to tell your story, you must turn to unconventional means. This is the idea behind Okay, Universe: Chronicles of a Woman in Politics, a new graphic novel by Valérie Plante, the first woman ever elected mayor of Montreal.

The book was released at the end of November by Drawn and Quarterly, a Montreal publishing house specializing in comics and graphic novels, under its original French title, Simone Simoneau: Chronique d’une femme en politique. It is illustrated by Delphie Côté-Lacroix, and the English translation comes to us courtesy of Helge Dascher.

Okay, Universe is filled with a sense of childlike wonder that seems to match Plante’s ready enthusiasm, persistent smile, and vivacious personality. The story focuses on Plante’s 2013 election to city councillor, through her comic book alter-ego, Simone Simoneau. After finding herself in a career “plateau,” Simoneau is called upon by the municipal party Action/Reaction Montreal, who have become interested in her grassroots volunteering work with immigrants and ecological groups. She’s lured into running for office, at first reluctantly, but soon with steady determination. “We need more women in politics,” she muses after an interview, to which one of her daughters responds, “Mom, what does a politician do?” According to Simoneau, they “listen to everybody,” “help people get their problems sorted out,” “hold meetings in the community,” and, most importantly: “When something’s broken, they fix it.” 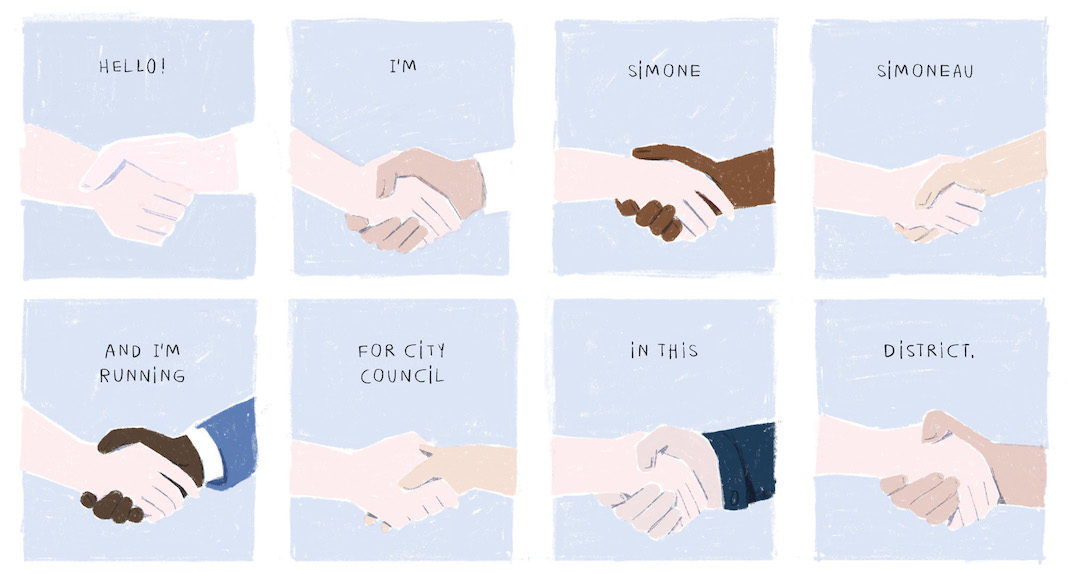 The book breaks down the real-world problems of running for local office, like meeting fundraising quotas when you don’t have rich friends or business associates to borrow large sums of money from. Multiple pages are devoted to the stresses of dressing as a woman in politics, like being told that one should dress, “not fancy, but elegant, not too young, not too old, flattering, but not sexy.” Simoneau faces small insecurities, like inappropriate campaign poster defacements, or having a volunteer ask voters, “Wouldn’t you like to have a pretty councillor for a change?” 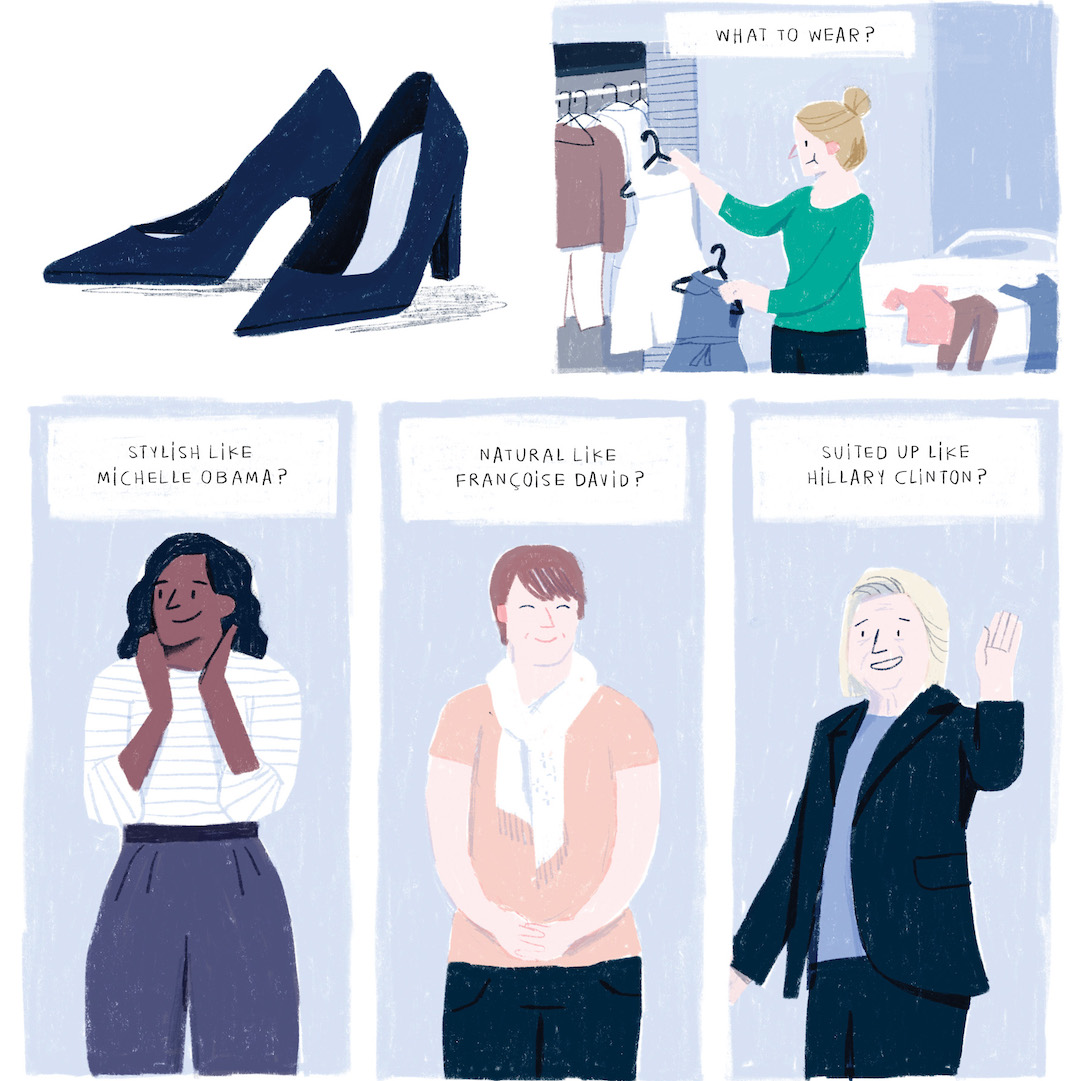 But the story also dives into more complex problems. When Simoneau asks a neighborhood local if he thinks they should add more parks to the neighborhood, he expresses his fear that planting more trees would result in raised rent prices. “Listen, lady, you can build all the parks you want, but you better make sure that people can pay the rent, or else the kids in those parks will be going hungry.” This illustrates what seems to be the primary subtext of the story, which is that without actually interacting with the community they represent (or hope to), even the most well-intentioned political agendas can have unfortunate consequences.

Plante and Côté-Lacroix paint a vivid picture of what political life can mean for a woman both publicly and privately, as when Simoneau’s husband receives monumental praise for “helping her” take care of the kids while she’s busy campaigning. “He’s not helping, he’s doing his part, that’s all!” she exclaims.

The cast of characters is diverse, bringing together teapot-wielding grandmothers, Mexican immigrants, and feminist metalheads to talk about politics, gentrification, and gender inequality. It hits that sweet spot of realistic, yet optimistic, the kind of book you’d be satisfied to see your young daughter (or son) reading.

Though the story ends with Simoneau’s election, off the page, Plante is still working hard for the people of Montreal. Her major issues are affordable housing and public transportation, which she has worked to improve by adding 300 hybrid buses to Montreal’s system, and by forwarding a proposal for a new “Pink Line” on the city’s metro.