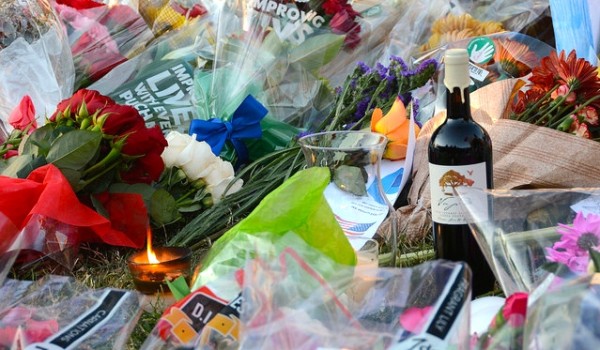 This weekend, at the gates of the French Embassy in Washington, there were candles, bouquets of flowers galore, messages of mourning… and bottles of French wine, which have curiously become a symbol of solidarity .

These bottles and cups scattered among the roses echoed numerous articles and reviews in the American press which, as in France, stressed the same fact: Friday night in Paris, France’s lifestyle was targeted, or at least the image of the French lifestyle.

“What is under attack here is the lifestyle of the French—their joy of life, their lifestyle, their way of truly enjoy the pleasures of life every day,” Shellie Karabell wrote in Forbes. She noted that Gertrude Stein, matrone of the Lost Generation of American writers, had once written that the “French people really do not believe that anything is important except daily living and the ground that it gives to them and defending themselves from the enemy.”

Over the weekend, a comment on the New York  Times website, written Friday night by someone in Santa Barbara under the name “Blackpoodles,” went viral on social media.

“France embodies everything religious zealots everywhere hate: enjoyment of life here on earth in a myriad little ways: a fragrant cup of coffee and buttery croissant in the morning, beautiful women in short dresses smiling freely on the street, the smell of warm bread, a bottle of wine shared with friends, a dab of perfume, children [playing] in Luxembourg Gardens, the right not to believe in any god, not to worry about calories, to flirt and smoke and enjoy sex outside of marriage, to take vacations, to read any book you want, to go to school for free, to play, to laugh, to argue, to make fun of prelates and politicians alike, to leave worrying about the afterlife to the dead.”

“No country does life on earth better than the French,” the comment continued.

In the same vein, Quartz translated into English drawings by Joann Sfar, a cartoonist Charlie Hebdo, depicting some classically French topics: epicurean delight, exhilaration, freedom—everything that the terrorists want to blackwash with fear.

To explain to readers the real target of the attacks, the New York Times published an article on the eleventh arrondissement, portraying it as a lively neighborhood, young, multi-cultural, socially mixed, and “known for its good nature.” The newspaper compared the 11th to Manhattan’s East Village. Why have terrorists targeted this neighborhood? “Residents described the assaults as a deliberate desecration of a decidedly Parisian way of life, embodied in the area’s bespoke leather boot shops, avant-garde galleries, record stores, upmarket restaurants, cafes and synagogues,” wrote the Dan Bilefsky, the article’s author.

Using a different tack, John Oliver, the host of Last Week Tonight, poked fun at the divide between French culture and the ideology of the Islamic State. “If you’re in a war of culture and lifestyle with France: good fucking luck.”