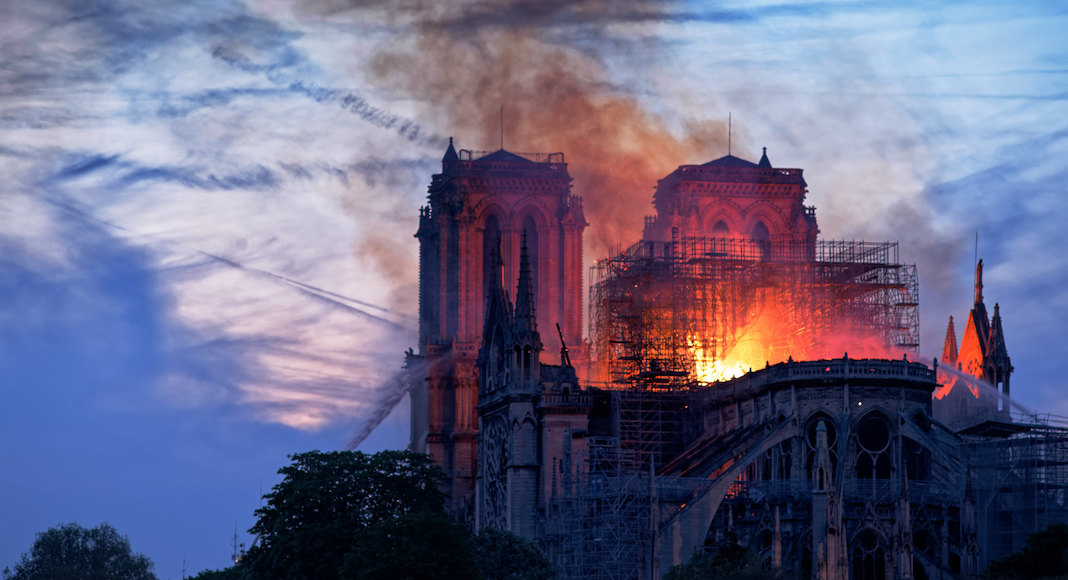 Fire Destroys Roof and Spire of Notre-Dame Cathedral In Paris

A large fire broke out at Notre-Dame Cathedral in Paris on Monday, April 15, causing massive damage to the historic monument and bringing the entire city to a halt as Parisians and tourists gathered in the streets to watch the cathedral burn.

The historic blaze brought down the cathedral’s 19th century spire and two-third of the roof, and caused immense damage to the structure. Historic artifacts and art were rescued from the flames.

During the first four hours of the fire, firemen struggled to contain the blaze — and for a while weren’t sure if they could. “The next hour and a half will be decisive,” a spokesman for the city’s firefighters said at 9:30 p.m. Paris time.

The fire was reported to have started just before 6:30 p.m. in the cathedral’s attic. The people inside Notre-Dame were quickly evacuated with no information given as to what was going on. Engulfed in flames, the cathedral’s spire collapsed just before 8 p.m. Gasps and cries rose from the crowds as it split in two, the top half diving into the flames. The roof began to collapse around 8:15 p.m. when the flames were 20 to 30 feet tall. At 9:01 p.m., a reporter for Le Monde shared a photo on Twitter showing smoke billowing from the left northern tower.

At 10:20 p.m., the situation seemed dire: “Two-thirds of the roof, which has collapsed, and the spire, have been affected by the fire. Currently the operation aims to preserve the back of the cathedral, where the most precious works, which we are evacuating, are located. The most precious works have been secured,” said the commander of the city’s fire brigade, General Jean-Claude Gallet. “The second operation concerns the northern belfry, with the risk of collapse of the [structure holding the bells]. If the [structure holding the bells] collapses, it’s the collapse of this tower.”

It was only at 11 p.m. that Gallet, announced that the situation was under control. “We can consider the structure of Notre-Dame saved and preserved in its entirety,” he said. “The fire has diminished in intensity,” added Secretary of State for the Interior Laurent Nuñez. The last of the flames were extinguished by the following morning.

'Like all our compatriots, I am sad this evening to see this part of all of us burn,' President Emmanuel Macron tweeted. More photos of the Notre-Dame Cathedral blaze: https://t.co/uqkOUgRn8c 📷 @PlatiauCharles pic.twitter.com/5q8wjOKE5h

The cause of the fire is unknown, but French media has quoted the Paris fire brigade as saying the fire is “potentially linked” to massive renovation project happening on the cathedral’s spire. The scaffolding, built all around the spire and over the roof for the renovations, is still standing over a now empty space where the top of the cathedral used to be.

On April 16, a clearer picture began to emerge. A fire alarm first went off at 6:20 p.m. local time, leading security guards to evacuate the cathedral even though they didn’t see any sign of a fire. The alarm rang again at 6:43 p.m., and this time the security officers noticed the fire, confirmed Paris Prosecutor Rémy Heitz in a press conference.

Prosecutors have opened an investigation into the cause of the fire. Miraculously, no injuries have been reported.

Bernard Lecompte, an expert in religious history, called Notre-Dame, “The heart of paris, the heart of the history of France.” The cathedral houses incalculable works of art of great value and importance, especially to Catholics. In 2017, 12 million people visited the Notre-Dame de Paris cathedral. Approximately 30,000 people visit the monument every day.

Firefighters are fighting the blaze from cherry picker cranes beside the cathedral. At 226 feet tall, the cathedral is a difficult place to put out a fire (firefighters prefer to put out fires from above, which isn’t possible at Notre-Dame). The Secretary Nuñez, told a press group in Paris that 400 firefighters were mobilized to fight the fire.

White smoke first began rising from the spire — the highest part of the cathedral at 295 feet. Around 8 p.m., a church official told NBC News the wooden interior was burning as well and was likely to be destroyed. Though the facade and building is largely made of stone, the roof, the spire, the interior, and part of the structure are made of wood, leaving it particularly vulnerable to fire.

“Everything is burning. The structure, which dates from the 19th century on one side and the 13th century on the other, there will be nothing left of it,” André Finot, spokesman for Notre-Dame, told AFP. French writer and historian Camille Pascal said the fire caused “the destruction of invaluable heritage.”

Many pieces of art and historic artifacts were rescued during the fire. Also escaping the blaze are sixteen copper statues which were moved from the roof just days ago because of the restoration.

A major fire is underway at the Notre Dame cathedral in Paris, one of the French capital city’s best-known landmarks.

French president Emmanuel Macron tweeted just after 8 p.m. “Notre-Dame de Paris is in flames. The entire country is affected. Thoughts go out to all Catholics and all French people. Like all our countrymen, I am sad tonight to see this part of us burn.”

Macron postponed a televised speech about how he was going to reunite the nation after months of gilets jaunes protests. In a statement, a spokesperson for the French president said: “Due to the terrible fire ravaging Notre-Dame-de-Paris, the President of the Republic has decided to postpone his speech.” Macron and the Prime Minister Edouard Philippe arrived on the scene around 8:30 p.m.

Paris mayor Anne Hidalgo tweeted at 7:30 p.m.: “A terrible fire is in progress at Notre-Dame Cathedral in Paris. The Paris firefighters are trying to control the flames. We are in close connection on location with the Diocese of Paris. I encourage everyone to respect the security perimeter.”

American president Donald Trump tweeted on the matter as well. He suggested using “flying water tankers” to put out the fire. It’s likely that he’s referring to the kinds of planes that normally drop water on forest fires. France’s emergency services responded on Twitter that “dropping water by plane on this type of structure could cause the whole of the structure to collapse.”

So horrible to watch the massive fire at Notre Dame Cathedral in Paris. Perhaps flying water tankers could be used to put it out. Must act quickly!

More coverage on the Notre-Dame fire:

How to Help Rebuild and Restore Notre-Dame Cathedral

“A Symbol of Enduring Identity”: How The American Press Responded to Notre-Dame

Was Everything Possible Done to Avoid the Fire at Notre-Dame Cathedral?