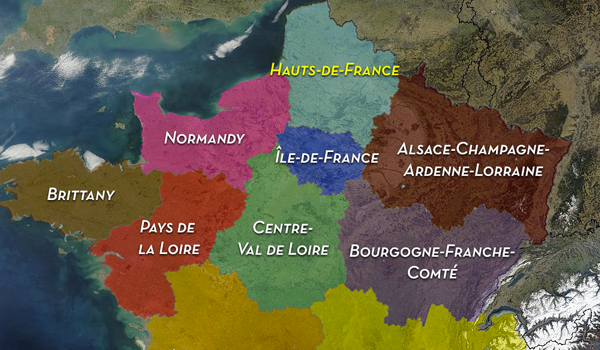 When France decided to merge its twenty-two régions into thirteen, it was supposed to simplify government and reduce the inefficiencies of an over-segmented bureaucracy, but it created another bit of administrative clutter: positively, ludicrously long interim names like Languedoc-Roussillon-Midi-Pyrénées, Alsace-Champagne-Ardenne-Lorraine, and Aquitaine-Limousin-Poitou-Charentes.

The new régions are now proposing new names ahead of a July 1st deadline. The cumbersomely named Nord-Pas-de-Calais Picardie has decided in a unanimous vote to move forward with a name suggested by council president Xavier Bertrand: Hauts-de-France, or “Upper France.”

The name beat out the other two contenders “North-de-France,” which sounds like a joke about how close the territory is to England, and “Terres du Nord,” which sounds weird if you say it with an English accent.

“Marrying the history of our region with the name of our beautiful country—it makes sense,” Bertrand said before the council voted on the name. 55,000 inhabitants logged their choice on a council website over the weekend. All 116 Républicains on the council voted in favor of Hauts-de-France, while the remaining members—all from the Front National—abstained from the vote. The Socialist Party withdrew from last December’s elections to help the Républicains handily defeat the FN for control of the region.

Marine Le Pen, Front National president and avid blogger, said that “This ignores the history of our territories,” referring to the strong cultural identity of the Picards and the heavy Belgian and Dutch influence on Nord-Pas-de-Calais. Hauts-de-France is in direct opposition to the alternate nickname of the region, Pays-Bas Français, which roughly translates to “French Low Countries.”

In an informal poll, voters in Alsace-Champagne-Ardenne-Lorraine favored Grand Est and Austrasie as potential permanent names for the region.