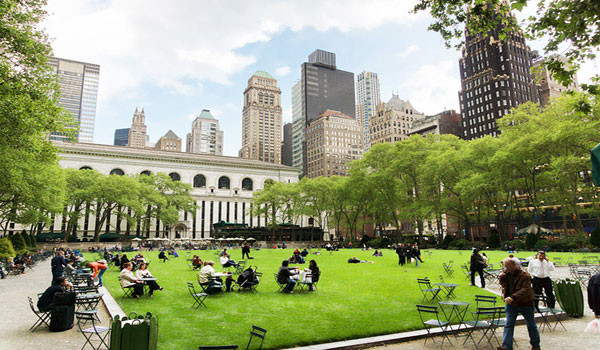 A New York September with a French Flavor

New York is gearing up for a very French September.  With parades, concerts and fairs, never before has France been so visible in the Big Apple.

This unofficial month of France will conclude in style with a window into French culture.  The month will wrap up with the Taste of France, which for its second annual exhibition will set up in the legendary Bryant Park September 28-29. The organization’s President, Paul Bensabat, expects some 100,000 visitors and declared the event “the biggest French event outside of France.”  The French minister of foreign affairs, Laurent Fabius, will inaugurate the event.  All the effort will be toward what Paul Bensabat hopes will be an event “showing a side of France Americans aren’t accustomed to seeing.”  There will be good food and drinks, of course, but visitors can also explore one of Safran’s airplane engines or even see a giant 3D animation of Paris.  For two days, Bryant Park will be, more than anything, a garden of French culture.

Earlier this month, la Maison Française of Columbia University launched its own festivities.  To celebrate its 100th birthday, this little piece of France, which has been housed on the campus of the prestigious American university since 1913, organized a series of events, including exhibitions, conferences, and screenings.  The celebration was launched September 5 with the opening of an exhibition of rare documents chronicling the rich history of la Maison Française.

Gilles Amsallem, co-founder of French Tuesdays, reassured us in August that Dîner en Blanc, which he co-hosts, had not forgotten New York.  The world’s most celebrated culinary flash mob will return to the Big Apple on Sept, 18th.

Everyone knows the Francofolies of La Rochelle, but in September you can discover the Francofolies of New York.  On September 19 the “Francos” organizers will bring together numerous French and American stars to pay tribute to Edith Piaf, the French icon and American idol. Charles Aznavour (above), Marianne Faithful, Madeleine Peyroux, Duffy, Patricia Kaas, Angélique Kidjo, Alex Hepburn, Beth Ditto and Julien Clerc, among others, will be on stage at Beacon Theater to perform Piaf’s songs.  Tickets went on sale July 19.

And if you want more of Piaf, Patricia Kaas will pay her own musical tribute to the star at her concert “Kaas sings Piaf,” September 20 at Town Hall.

The contemporary art festival, Crossing the Line, presented by The French Institute Alliance Française (FIAF) will hold its seventh exhibition from September 19 through October 13.  Several quirky performances and installations are on the program.  Among them, the living library of French choreographer Fanny de Chaillé and the “karaoke theater” of Annie Dorsen.

This is a first for New York’s French community.  On September 21, representatives of the city’s French inhabitants will parade down Fifth Avenue alongside their German counterparts, as part of the traditional Steuben Parade.  France was invited to the parade to celebrate the fiftieth anniversary of the Elysée Treaty, also known as the Treaty of Friendship, which helped reconcile the two countries.  The procession will set off from 68th Street at 11:30 and conclude at 86th Street.  Wave your French flags!