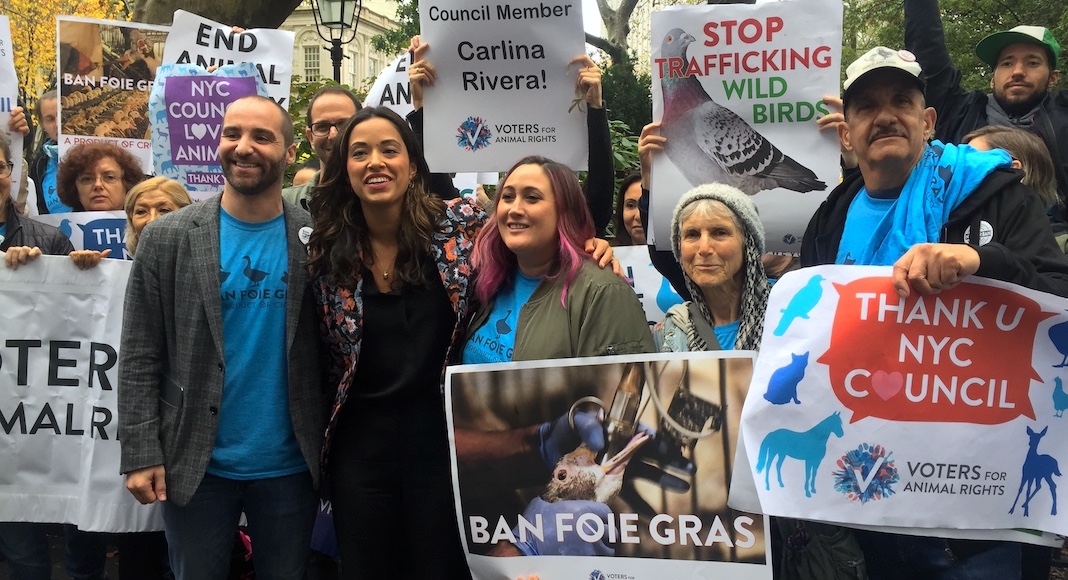 Bad news for foodies and producers of foie gras. New York City Council voted Wednesday, October 30, to ban the French specialty in the city. Foie gras is currently served at a 1,000 restaurants across the five boroughs.

Forty-two city councillors voted in favor of banning it, and six voted against. Set to go into effect in 2022, the law, which bans “the sale or provision of certain force-fed poultry products,” allows for fines of $500 to $2,000 for offenders. “I am pleased that the city council wants to put an end to inhumane and cruel practices, with animals suffering,” said Carlina Rivera, a Democrat elected in southern Manhattan who drafted the bill. “One hundred and fifty years after the first law protecting animals, New York must continue to set an example by becoming the most humane city.”

The ban is welcome news for animal rights groups such as Voters for Animals Rights. About sixty activists, wearing blue t-shirts with the message “ban foie gras, a product of cruelty,” met at nine in the morning in front of the City Hall to give show their support. Among them was Hervé Breuil, director of an animal shelter in Woodstock. “It’s the reward for years of work,” explains the Frenchman who for several years has been trying to convince elected officials to ban it. “We hope that this ban in New York will be an example to the world.”

The measure comes just a few months after it was banned in California, which forced the only foie gras-producing farm to shutter its doors. In New York, 400 jobs are at risk. “They have a three-year period before the ban [begins], which allows employees to find a job again, and producers to diversify their operations by choosing a domaine that is more respectful of animals and nature,” says Breuil.

Ariane Daguin, CEO of D’Artagnan, which produces and sells foie gras in the United States, said on Monday that banning foie gras in New York would be a “political decision.” “They wanted to use foie gras as an example because they knew they would get more votes by siding with vegetarians.”