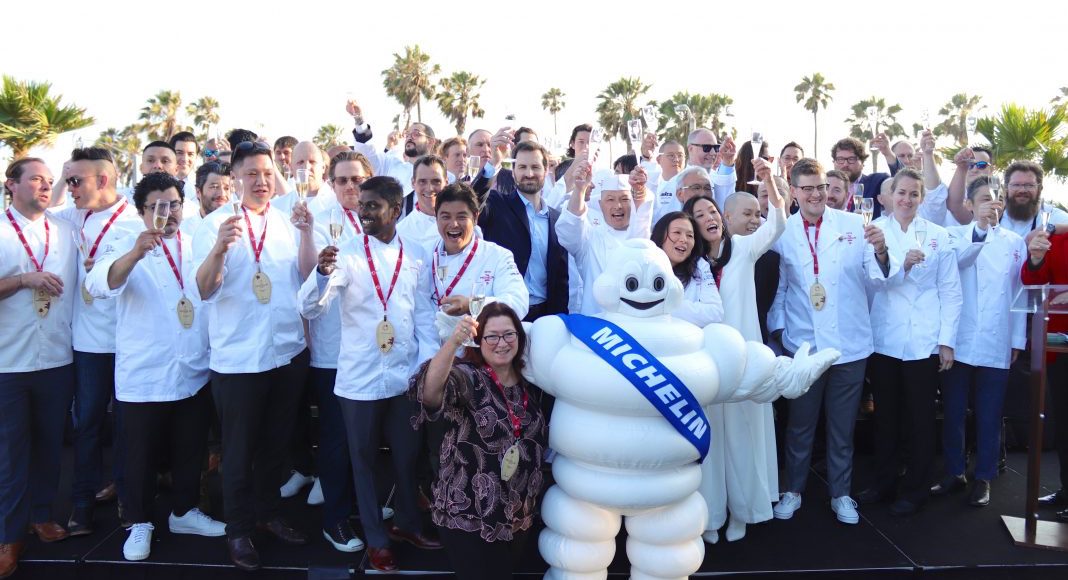 Michelin Reveals the First Stars Awarded for the California Guide

On Monday, June 3, on a podium erected below shady palm trees, in front of the Pacific Ocean, dozens of California chefs proudly wore their jackets boasting Michelin badges. A total of 90 restaurants in the Golden State were awarded one, two or even three stars for the official release of the first ever Michelin California guide.

While San Francisco has been the only California city represented in the Michelin Guide collection for the past ten years, just two months ago the French company announced the creation of a new statewide Californian guide covering the Bay of San Francisco, Sacramento, Los Angeles, San Diego and Santa Barbara. The move, the first of its kind in the United States, was encouraged by a generous donation of $600,000 from the California office of tourism, Visit California.

Among the lucky winners of this first Californian guide in 2019: the French chef Dominique Crenn in San Francisco (who keeps her three stars); Ludo Lefebvre in L.A. (one star for Three Masons); Carlos Salgado, chef of Taco Maria in Orange County (one star); and Niki Nakayama, one of the rising stars in contemporary Japanese cuisine in Los Angeles, at n/naka (two stars). “When we opened our restaurant eight years ago, we had only one dream: to one day get three stars in the Michelin guide,” confesses Nakayama. “It is a very important reference for many American chefs. The Michelin Guide embodies a certain vision of cuisine that is important to us: attention to detail, caring for guests and a constant desire to improve.”

The Michelin guide did not choose the L.A. region and its mythical palm tree-lined beaches by accident for the launch of its new California edition. For the past ten years, the city has had a complicated history with the prestigious guide, which last dedicated an edition to Los Angeles in 2008 and 2009, before suspending it in 2010, against the backdrop of the financial crisis. At the time, the guide’s director, Jean-Luc Naret, justified this decision by explaining to the press that Angelenos were “not real foodies.” Deeply offended, some chefs and food critics have since accused Michelin of snobbery.

The launch of the new 2019 guide on Monday in Huntington Beach therefore seemed like an attempt at reconciliation, even if the prestigious guide has once again awarded all its three-star designations to restaurants in the San Francisco Bay area (seven total: Atelier Crenn, Benu, The French Laundry, Manresa, Quince, The Restaurant at Meadowood, SingleThread), snubbling Los Angeles, as the guide did in in 2008 and 2009.

“Certainly, there aren’t three stars in L.A. yet, but the city, in my opinion, has real potential! Los Angeles has received a lot of one and two-star awards (24 in total), which is rare and very promising,” says Gwendal Poullenec, International Director of Michelin Guides. “Today, even if San Francisco and its region continue to drive California upwards, there is a real dynamism in the rest of the state… Especially since the guide has a catalytic effect: in San Francisco, since the guide began in 2007, we have gone from one three-star restaurant to seven today,” he recalls. “So I’ll see you in Los Angeles in five years.”

The Restaurant at Meadowood