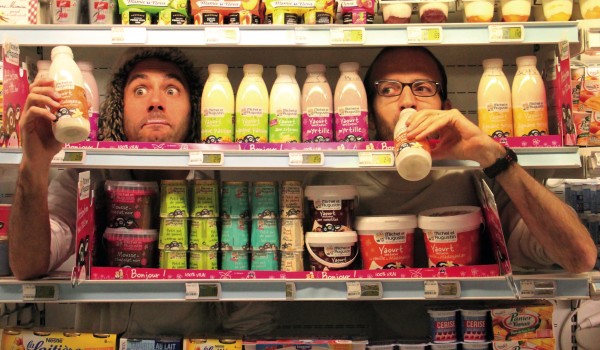 Michel et Augustin is a small company that produces gourmet cookies, yogurts, and ice cream. Founded a decade ago by two friends, it has now become iconic in France through its offbeat marketing techniques (the packaging often features drawings, rhymes, and little jokes). So what next, now that the company has reached revenues of 25 million euros? Why, New York, of course.

“Selling cookies in the country of cookies — it can seem daring,” admits Augustin Paluel-Marmont, who co-founded  Michel et Augustin with his friend Michel de Rovora. “We believe in this, because we think we have something new to bring [to New York]. There’s a cultural similarity between New York and France, as well as an attraction to haute cuisine and French products,”  says the 38-year-old business-owner.

Williamsburg or Park Slope: Augustin Paluel-Marmont doesn’t know yet which Brooklyn neighborhood he will open his “Banana Farm”–because yes, in the world of Michel et Augustin, you don’t say “showroom” or “office,” but “bananerie.” One thing is sure–the brand is aimed at attracting a customer base of young city-dwellers with fine palates consistent with the population of these two Brooklyn neighborhoods. “We’re going to organize classes and conferences to help people get a professional pastery chef qualification, and we’re going to host open houses on the first Thursdays of every month where customers will be able to meet the team and participate in activities.”

In total, Michel et  Augustin will have a dozen employees in New York, a third of whom will come from Paris, a third recruited among francophones living in the United States, and a third Americans. Their first goal: getting their products on shelves in around 200 stores and cafes in New York. In September, the Parisian team will make the trip over in cargo with the crates, which is sure to create a small buzz. Augustin Paluel-Marmont plans to move with his wife and five children during the summer of 2015. “They’re delighted,” he says.

Here, Michel et Augustin will probably be dubbed the French Ben & Jerry, a duo that also built their image on a close relationship with their customers. “Without [the customers], we wouldn’t exist,” Augustin Paluel-Marmont says, “They are our initial inspiration, even if we end up taking a different path.”

Meanwhile, the promotion for the opening of “Banana Farm” is likely to be noticed. In the habit of using wacky marketing techniques, the founders have already appeared half-naked in a supermarket wearing a cowhide loincloth, organized promotion events for families such as Une Nuit à la Belle Etoile (A Night Under the Stars) with a picnic and music, and even renamed a Parisian metro station after their brand. We will see what New York inspires.