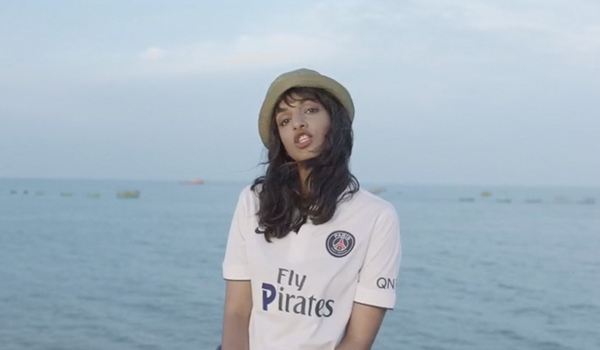 Paris Saint-Germain—the Arsenal of Ligue 1—has asked that M.I.A. remove her modified PSG jersey from “Borders,” her latest video.

The video, directed by the rapper herself, echoes the song’s lyrics about the borders people put up between themselves and other, while visually criticizing the recent treatment of refugees in Europe. For a few seconds, she appears copping an 80s hip-hop pose and wearing a PSG jersey that reads, “Fly Pirates,” a play on the slogan of the club’s sponsor, Emirates Airlines.

“More than being surprised,” the club wrote in a letter to Universal Music’s Melissa Battino, who manages M.I.A., “we simply do not understand why we are associated, through our logo and the official jersey of our team’s players, to such denunciation,” referring to the rapper’s decrying of the “treatment and living conditions of refugees who crossed the Mediterranean Sea to reach Europe.”

To be fair, the lyrics aren’t exactly a scathing critique of anything, consisting mostly of M.I.A. saying a word or phrase, followed by “What’s up with that.”

She seems equally as angry about not being played on the radio as she is about Syrian refugees. Lyric website Rap Genius put a little more work in her lyrics than M.I.A. did, explaining that the song “is a critique of the borders we set up between each other as individuals as well as nations. Shallow mantras of today’s generation (killing it, being bae, being real) are juxtaposed with current political events (police shots, boat people, same-sex marriage), and deeper questions of meaning (family, beliefs and history), as M.I.A. repeatedly asks ‘What’s up with that?'”

PSG requested that M.I.A. and Universal “cease broadcasting” anything containing their jersey, saying that Universal had “unduly took advantage of our popularity and reputation to enhance the attractiveness of your artist and, consequently, the profits of your company.” They cite the Paris Saint-Germain Foundation, “the first foundation created by a professional football club,” which donated €1 million to Secours Populaire and the United Nations High Commission for Refugees in September.

It’s worth mentioning that the donation came right as UEFA and the Gulf States were fielding increasing criticism about how much action they were taking to help solve a refugee crisis in their own backyard. The United Arab Emirates, whose government investment group owns Emirate Airlines, told the Associated Press that they had given residency permits to more than 100,000 refugees since 2011, almost as many as had currently lived in the country. The country also said that it had spend over a billion dollars between coping with the influx of refugees and fighting Daesh.

At the time, Amnesty International pegged the number of Syrian refugees at 3.8 million, 95% of which were taken in by five Middle Eastern countries—none of them the United Arab Emirates. The UAE responded that they finance regional humanitarian projects like the Jordan’s Al Mreijeb Fhoud refugee camp, which houses about ten thousand Syrians and a field hospital in Jordan that has treated half a million refugees, according to goverment officials.

It would seem that, if anything, M.I.A. has a problem with the name PSG wears emblazoned on their jerseys, rather than the club itself. While that doesn’t necessarily hang responsibility around the Parisian dynasty’s neck, there is a level to which your sponsor’s politics are also, by the transitive property, your politics.

This incident has at the very least cleared up some confusion around the French Morning offices, as our American editor-in-chief had previously been under the impression that “Fly Emirates” was the name of an Arab-language rap group.