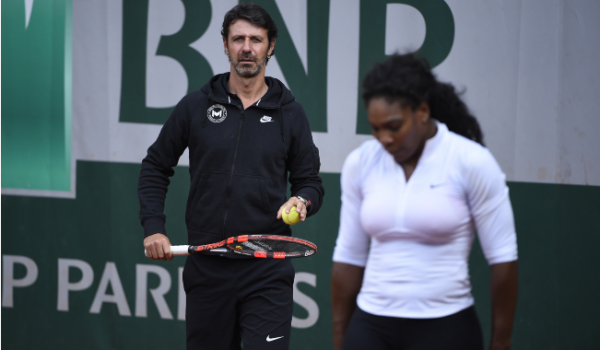 She’s the star of this year’s US Open, which began yesterday in New York: Serena Williams only needs to win in the Big Apple to achieve an historic calendar Grand Slam after conquering Melbourne, Roland-Garros and Wimbledon. In the stands, Williams’s entourage will be cheering her on, among them her father Richard, of course, but also a Frenchman who can boast a major role in the spectacular career of the tennis star.

Patrick Mouratoglou, who owns a tennis school in France, has been Serena Williams’s French tennis coach for three years and is widely considered to have been instrumental in her rebound, even by Williams herself. When Mouratoglou began coaching Williams, she was ranked 5th among the world’s greatest tennis players. Now over 30 years old, she is back at number one.

Since he arrived in New York, Mouratoglou’s views on is protégée’s chances at achieving the Grand Slam haven’t wavered. He is “more than confident,” as he has told interviewers, that she can achieve the success of Steffi Graf, who was the last player to win a calendar Grand Slam in 1988. When your job is to instill confidence, it’s probably better to leave doubt aside — especially self-doubt. It’s a good thing then that Mouratoglou isn’t particularly self-deprecating. What matters when you’re dealing with a player, he explains in his autobiography Le Coach, “is to take charge and impose respect right from the beginning.”

Williams is a champion famous for ruling her own world, and after she lost Roland-Garros in the first round in 2012, she went straight to Mouratoglou. Three weeks later, she won Wimbledon. Since then, her accolades have jumped from 13 Grand Slam titles to 21, and of course this year all eyes are on whether she’ll be able to pull off the calendar Grand Slam, taking home all four major international tournaments in the same year.

Williams is the first to sing Mouratoglou’s praises. “Working with Patrick helped me a lot and allowed me to gain consistency, have new goals, change certain aspects of my game and just to be better all around and at all matches,” she said at the pre-tournament press conference.

With no other celebrity protégés to speak of, Williams is certainly the biggest name that Mouratoglou has ever worked with. He gained her attention for his ability to get his players to make huge strides. Those he has trained have come from the depths of the score boards to the top, like Marcos Baghdatis of Cyprus or the French Player Aravane Rezaï. Since 2012, though, other players have been off-limits for Mouratoglou, even Serena’s tennis star sister Venus.

The coach-player relationship obviously requires collaboration, and all of that time spent together has led to paparazzi-fueled debate about whether there might be something more to Williams’s and Mouratoglou’s relationship. They have said nothing to dignify any speculation, and attention has shifted to other possible suitors of Williams’s.

When it comes to emotion in coaching, though, Mouratoglou couldn’t be clearer: keeping your distance is key. “As a coach, emotions are dangerous […] You have to learn never to make decisions under their influence,” he explaned, for example, in a recent video. His role is to absorb his player’s emotions to the point where he makes himself essential to her. When she’s training, Williams isn’t even in the habit of hitting a ball if Mouratoglou isn’t watching her.

At 33, though Williams’s training schedule is not as intense as it once was, it is still extremely rigorous: two hours of tennis every morning, muscle training, then yoga. She’s hard-working on the court and off, and especially in her determination to learn new things — even French. Two years ago she didn’t speak a word of it, but then she decided to take it up and now she can speak enough French to give a victory speech at Roland-Garros.

French is increasingly spoken among the tennis star’s entourage as well: after Mouratoglou there’s Fabien Paget, a young agent who looks after Serena Williams’s business outside of the US. A French ciné — a kind of holistic healer/chiropractor — also recently joined te team. At flushing meadows, the cheers coming from the Williams camp will have a distinctly French accent.