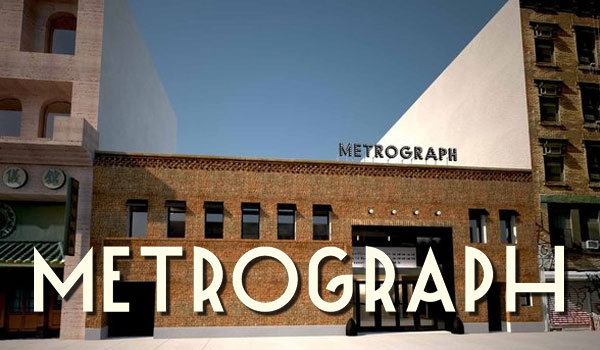 Independent theaters don’t open in New York every day—that’s a good enough reason to welcome the arrival of Metrograph, a theater that, in a time of Netflix and streaming video, is still betting on the silver screen.

And just like with that precious metal, you won’t see any golden ticket blockbusters at the Metrograph—only independent features, classic films, and retrospectives. The duplex will open in March on the Lower East Side, complete with two theaters, a café, a restaurant, and a small bookstore.

Its first week of programming, starting March 4th, will be devoted to films that plunge the audience into special, heightened cinematic experiences. The bill will include Scorsese’s Taxi Driver, Godard’s Vivre Sa Vie, and Variety by Bette Gordon.

“One of the essential joys of going to the movies is ritual: the lights dimming, the first beam of light on the screen, the familiar fanfare or logo (the arrow and target to announce A Production of the Archers), sitting in the dark with a roomful of strangers, waiting to be transported,” a press release from the Metrograph read.

From March 9th to 17th, the Metrograph will show Jean Eustache’s seminal New Wave film La Maman Et La Putain, as well as Mes Petites Amoureuses and Les Mauvauises Fréquentations. Through April, the theater will delve into some of the classics of cinematic history, like The Age Of Innocence by Martin Scorsese, Barry Lyndon by Stanley Kubrick, Chelsea Girls by Andy Warhol, and Le Diable Probablement by Robert Bresson.