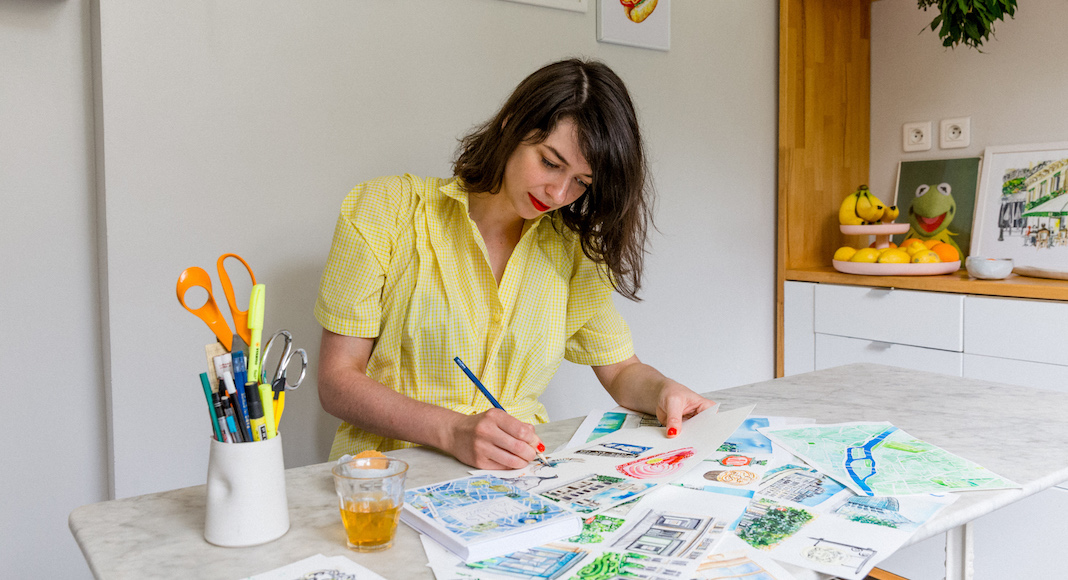 Paris has seen countless books written about and dedicated to it, but a watercolor illustrated foot-map equally useful as the ultimate guide and as a coffee table staple is a first. Jessie Kanelos-Weiner and her co-author Sarah Moroz wanted to create a pragmatic book that organizes the city in a linear, realistic way. And thus was born, “Paris In Stride: An Insider’s Walking Guide,” a book of 7 guided walks, and your Paris street confidante.

The artist-in-love in Paris is the truest cliche and one that the Chicago-born Parisienne Jessie Kanelos-Weiner could not pass up. Kanelos found her artistic eye in Paris after working as an au pair and then returning to the city for love. It was only appropriate that she illustrated the entire book herself. “Everyone is so saturated with photos these days that the illustrations reinforce the timelessness of the city it inspired,” says Kanelos.

The two co-creators took endless walks to chose the perfect corners that illustrate the essence of the city for a local.

Alongside her private business as an illustrator for particular clients (including Atelier Cologne) Kanelos also runs a blog called thefrancofly about the little intricacies of living in Paris. She continues to illustrates small, little outtakes from her life that really open up an entire other conversation. Often focusing on food and pastries, Kanelos offers Paris advice (especially that pertaining to food) and her continuous struggles as an expat. Sometimes her stories delve into her own intimate problems as well.

Kanelos mocks Parisiennes for being trop Parisienne in her illustrations, but also laughs at that “Americans get hot and bothered over not having extra-large iced coffees in Paris.” Her reflections are a realistic outlook on her city where the romance still persists, but there is a level of being grounded and accepting of the faults as well. On the other hand, there are of course the positive points in her city like not working the month of August, actually having free weekends, and access to the freshest produce.

Kanelos’ illustrations are very organic without the slightest sense of overused cliche. Her book is similar — a compilation of authentic elements that reflect on the city Kanelos has spent almost 10 years in, and a Paris worth visiting.

Paris in Stride: An Insider’s Walking Guide by Jesse Kanelos-Weiner and Sarah Moroz is available at Rizzoli in NYC, and online

Jessie’s Favorite Paris Reads: (besides her own book)

Paris versus New York: A Tally of Two Cities by Vahram Muratyan