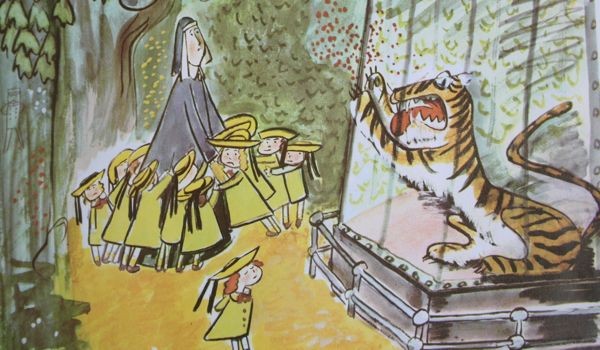 "Madeline in New York: The Art of Ludwig Bemelmans"

This year she is 75 years old, but on the pages of Ludwig Bemelmans’ famous books Madeline will always be the youngest of “12 little girls in two straight lines,” going on adventures and returning home to her Parisian convent and her teacher Miss Clavel. Now you can revisit the treasured stories and maybe introduce America’s favorite French schoolgirl to a new generation of fans at Madeline’s World, an exhibit underway at the New York Historical Society until October 19th.

Over the years, the Madeline stores have taken many forms from Bemelmans original books to made-for-tv movies to video games. When she first appeared on the pages September 1939 issue of Life Magazine, however, her creator — an Austrian immigrant in the United States — had no idea that she would make him one of the most respected and admired children’s book illustrators of the 20th century. Though today his books have sold 10 million copies, somehow they have never found an audience in France, Madeline’s home country.

In addition to 90 original illustrations from six volumes of Madeline, the exhibit includes other works of Ludwig Bemelmans’: illustrations that he created for the old Ritz Hotel in New York, decorations from the Onassis family yacht, and mural paintings from a Parisian bistro.

Don’t leave your youngest at home for this one: audio guides for families make it possible to visit the exhibit with children as young as 4 years old!

"Madeline in New York: The Art of Ludwig Bemelmans"