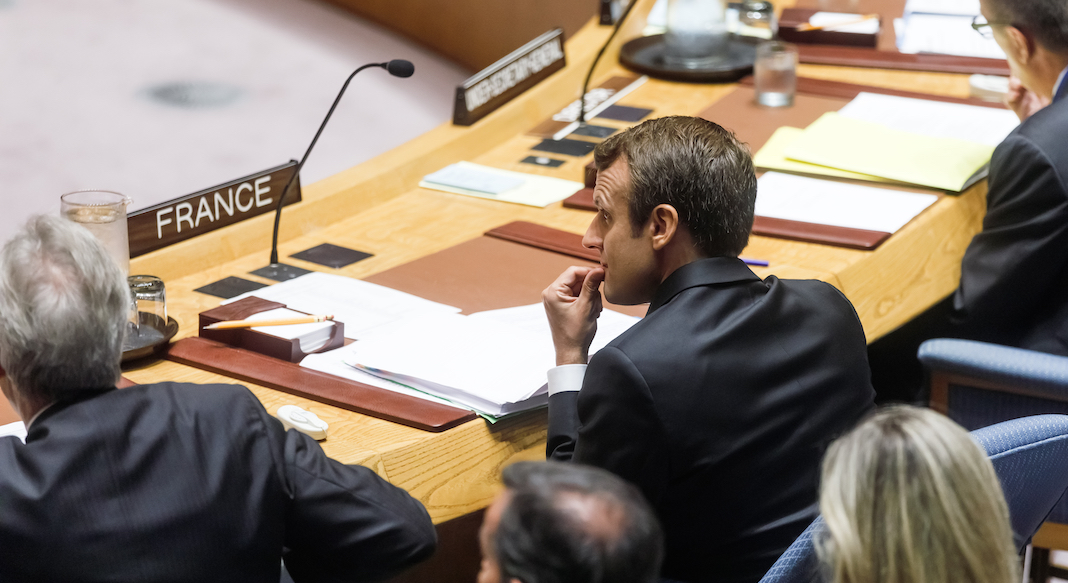 Emmanuel Macron would certainly call himself an advocate for sustainability, but according to Greta Thunberg and 15 other teenage climate activists, he’s mistaken.

On Monday, the 16 young activists for climate action filed a complaint with the United Nations, alleging that the countries have violated their human rights by not taking adequate actions to stop global warming. The complaint doesn’t ask for monetary compensation, but rather for nations to adjust their climate goals to meet the crisis.

Five nations were named — France, Germany, Brazil, Argentina and Turkey — which the young advocates say have failed to uphold their obligations under the Convention of the Rights of the Child, a 30-year-old human rights treaty. Many countries have ratified the treaty to allow complaints against them to be made, but only the five countries were mentioned by name.

Today at 11:30 I and 15 other children from around the world filed a legal complaint against 5 nations over the climate crisis through the UN Convention on the Rights of the Child.
These 5 nations are the largest emitters that have ratified the convention.https://t.co/ZSyDMTYFSF

Some of the world’s largest polluters, like the United States and China, are not in the suit because they didn’t accept the Convention of the Rights of the Child’s provision to hear complaints against them. Despite not being the largest polluters, the five nations named are nonetheless among the world’s most significant emitters of greenhouse gases.

Thunberg, who is 16, had been invited to speak at the U.N.’s Climate Action Summit, held on the first day of its General Assembly. She criticized the world’s leaders in an impassioned speech. “I should be back at school on the other side of the ocean. You all come to us young people for hope,” she chastised the room. “How dare you! You have stolen my dreams and my childhood with your empty words.” Shortly after her speech, the complaint was filed.

Despite the complaint, Macron appeared to respond positively to Thunberg during his remarks later that day. “We’ve seen the emotion this morning,” Macron said. “We cannot let our youth spend every Friday demonstrating for the climate and simply answer, ‘Everything is fine, we are doing everything right.’” He urged his fellow leaders to take ambitious action to combat the threat of climate change, and said there was a role for the young to take.

It’s imaginable that Macron would be understanding of Thunberg, considering the two have actually met before. After attending a climate march in Paris in February, Thunberg met with the French President at the Elysée Palace.

But in an interview with Europe 1, published Tuesday morning, the relationship between the pair was not strong enough to keep Macron amenable. “All the mobilizations of our young people, or not so young people, are useful. But they must now focus on those who are furthest away, those who are trying to block [sustainable initiatives],” he said. Macron explained that he doesn’t “feel that the French government or the German government are blocking [initiatives] today.”

“When I see that we are going to close all our coal operations, that we are stopping the exploitation of oil and gas, that we are taking action, I am not sure that this is the most efficient approach,” Macron said in reference to the young activists’s official complaint.

“I think, especially now, that we are in need of young people to help us to put pressure on those who are blocking [sustainable initiatives], by mobilizing, and who also participate in very concrete actions,” he said, making a final point that seemed to be toward the impassioned stance of the young activists: “Here, very radical positions are likely to antagonize the public.”

This wasn’t the first time in the last few days that Macron has been resistant to criticism of France. On a flight to New York on Sunday, Macron attempted to refocus frustrations onto Poland, which is heavily dependent on coal and which Macron claims blocked his efforts to make the EU commit to carbon neutrality in 2050. “Marching every Friday to say that the planet is burning, that’s nice, but that is not the problem,” Macron told reporters, adding people should “go protest in Poland! Help me move those I cannot push forward.”

On Monday, he attempted to reframe his comments about the eastern European nation. “I’m not stigmatizing anyone. But I want to convince our Polish friends that it’s good for them to move on this,” he said in a news conference.