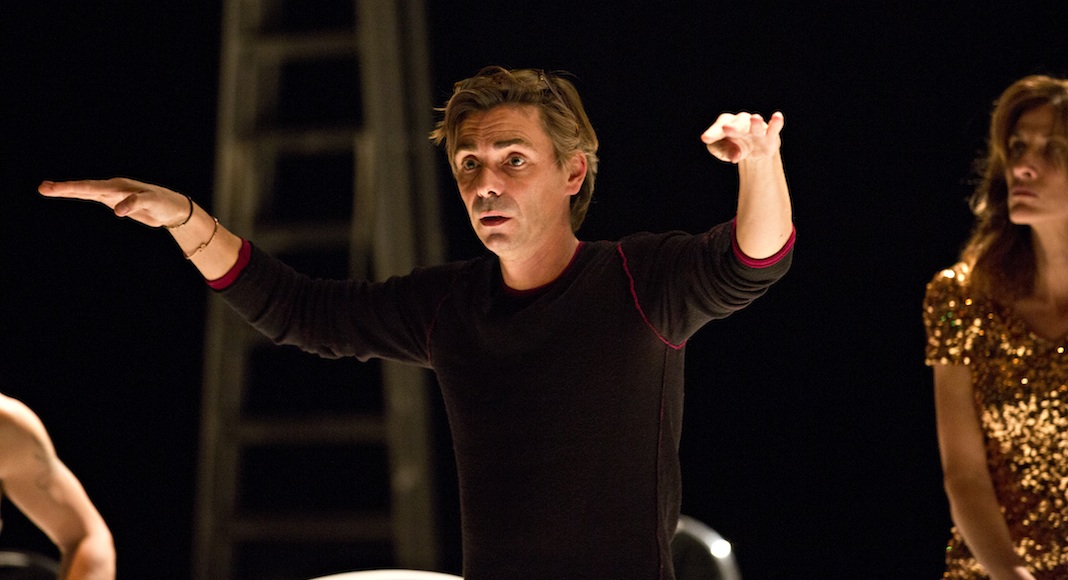 Playing Albert Camus in French in the United States is ambitious. And all the more so when it comes to a play virtually unknown to the general public like “The State of Siege.” But that doesn’t frighten Emmanuel Demarcy-Mota, the director of the Théâtre de la Ville, presenting this play from Friday, October 20 to Saturday, November 11, in Berkeley, Los Angeles, New York and Boston.

After bringing Ionesco’s “Rhinoceros” in 2012 and Luigi Pirandello’s “Six characters in search of an author” to the United States in 2014, Demarcy-Mota is happy to convey the “word of Camus.” Written in 1948, this play denounces fascism, and more generally totalitarianism, but targets Francisco Franco’s dictatorship in Spain in particular. The play tells of a city in Andalusia, plunged into terror with the arrival of a disease: the plague. Personified as an ambitious man, the plague forces a state of emergency to be instated, bringing about order and surveillance. Terror sets in until a revolt begins, personified by the character Diego.

Described as “a prayer of rage”, this play portrays youth facing a changing world, and reminds us that “we must fight against fear.” “In times of hope, the plague often returns. We must remain vigilant,” asserts the Franco-Portuguese director, his words seeming like a metaphor for the American election. In “The State of Siege,” Camus says that it is not enough to know the disease, you must cure it. We must believe in man, in his passions, in his dreams, and be wary of a century in which we’re wrapped up on controversy, which has replaced dialogue.”

Beyond the message, which is obviously very topical, Demarcy-Mota felt it was urgent to remember the strong ties between Camus and the United States, one of the strongest ties being his speech at the United Nations calling for the abolition of the death penalty.

Played by 16 actors in French some one hundred times already,”L’ Etat de siège” is subtitled in English on screens so it can be fully enjoyed by American audiences. This performance offers a rich auditory and visual experience, with videos of surveillance poetic landscape integrated into the performance, which is staged in an arena-like setting.

Demarcy-Mota has forged valuable partnerships with many American theaters through his excellent relationship with the Brooklyn Academy of Music (BAM) in New York. “The shows are a success, the theatre directors have pooled their financial resources to invite us,” said Demarcy-Mota, highlighting the strong relationship.

And, to “build cultural and artistic highways from city to city,” there are partnerships set up in place, such as the Brooklyn/Paris Exchange program, which allows French artists to come to New York City, and vice versa. And, after experimenting with Chicago, he is working on a collaboration with Detroit. “I want to work on erasing borders even though some presidents dream of making more,” he says. “I build bridges across the walls, that’s what keeps me alive.”