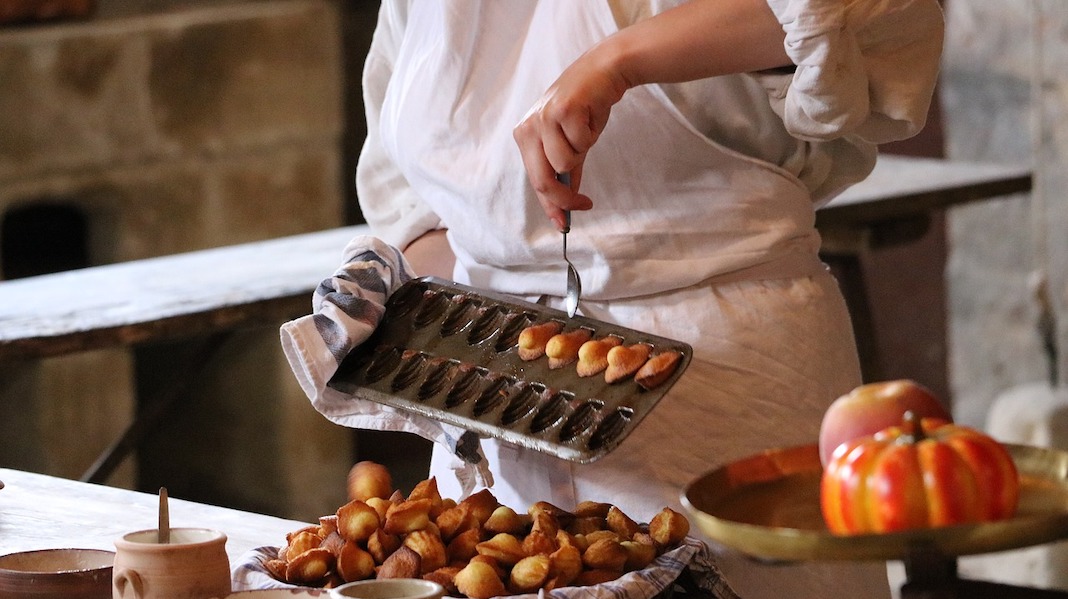 Let Them Eat Cake (And Remember It, Too)

A madeleine is neither a cookie nor a cake: It is a time machine.

French novelist Marcel Proust wrote eloquently about the idea of involuntary memory after his own unplanned flashback. In In Search of Lost Time, Proust dips the madeleine into a cup of hot tea, unintentionally evoking a memory from his childhood, when he had tasted that same treat many years earlier on a Sunday morning in his aunt’s home. These moments are not unique to Proust. Everyone has “madeleine” moments; sensory indulgences that pull us back in time.

My trips to France over the years have each been marked by their own “madeleines”: a sip of thick, dark hot chocolate reminds me of a visit to the Toulouse christmas market; the uneven notes of Gotye’s “Somebody That I Used to Know”  transport me back to the château region; the smell of crisp autumn leaves are inextricably linked to a stroll down the Cours Mirabeau in Aix-en-Provence. More potent than a picture or any purposeful attempt to remember, these unexpected flashes are as transportive as the DeLorean – if only for a microsecond.

My first experience of a madeleine moment was also inspired by dessert. During my first trip to Paris, my father and I stopped in the Marché Mouffetard for a crêpe. We took turns taking massive gooey bites, while navigating cobblestones streets across town towards the Champs Élysée. It was by no means the best crêpe I’d had, but the simple combination—warm, banana, melting chocolate, smushed into the light, slightly crispy pancake—still jolts me back to that trip. The taste recalls the beautiful sights, but most of all, a feeling of awe. When I want to remember France through the wonderment of 13-year-old eyes, I indulge in a crêpe nutella-banane.

During university, I participated in a French language course in Saint-Ouen-les-Vignes, a quaint village in the Loire Valley. We lived in an old château-turned-guesthouse, splitting our days between studying and ambling down dirt roads lined with fields. May was a month of endless fog and perpetual dampness. Every morning I’d wake to the smell of breakfast baguettes and warm milk intermingled with dew. To this day, the scent of dewey, fresh grass sneaking in through a foggy window, instantly conjures lazy afternoons in the creaky château, chilly spring air piercing the walls.

My longest stint in France was eight months in Toulouse, during which I became intimately acquainted with the regions salon de thé’s and sampled a wide array of baked goods. My memory of life there is a mélange of odors and tastes, well-worn chairs and couches in shops that became comfortable, then familiar, and ultimately benchmarks of my experience. I passed away days in Le Petit Magre, a small café decorate with stacks of old books, where I spent hours reading on my own, and had countless meetings with friends over a slice of cake. Now, when I walk past a bakery in the morning and smell butter and fresh bread wafting from the vents, I am transported back to Toulouse.

It’s almost impossible to know what taste, or smell, will invoke nostalgia before it happens. As Proust wrote, “It is a labour in vain to attempt to recapture it: all the efforts of our intellect must prove futile.” These madeleines are key to appreciating and understanding our pasts. For me, they are unexpected gifts that transport me to a moment long forgotten, and to corners of France that mark different periods of life.

Sweet as the little gâteau, my madeleines are always a treat.