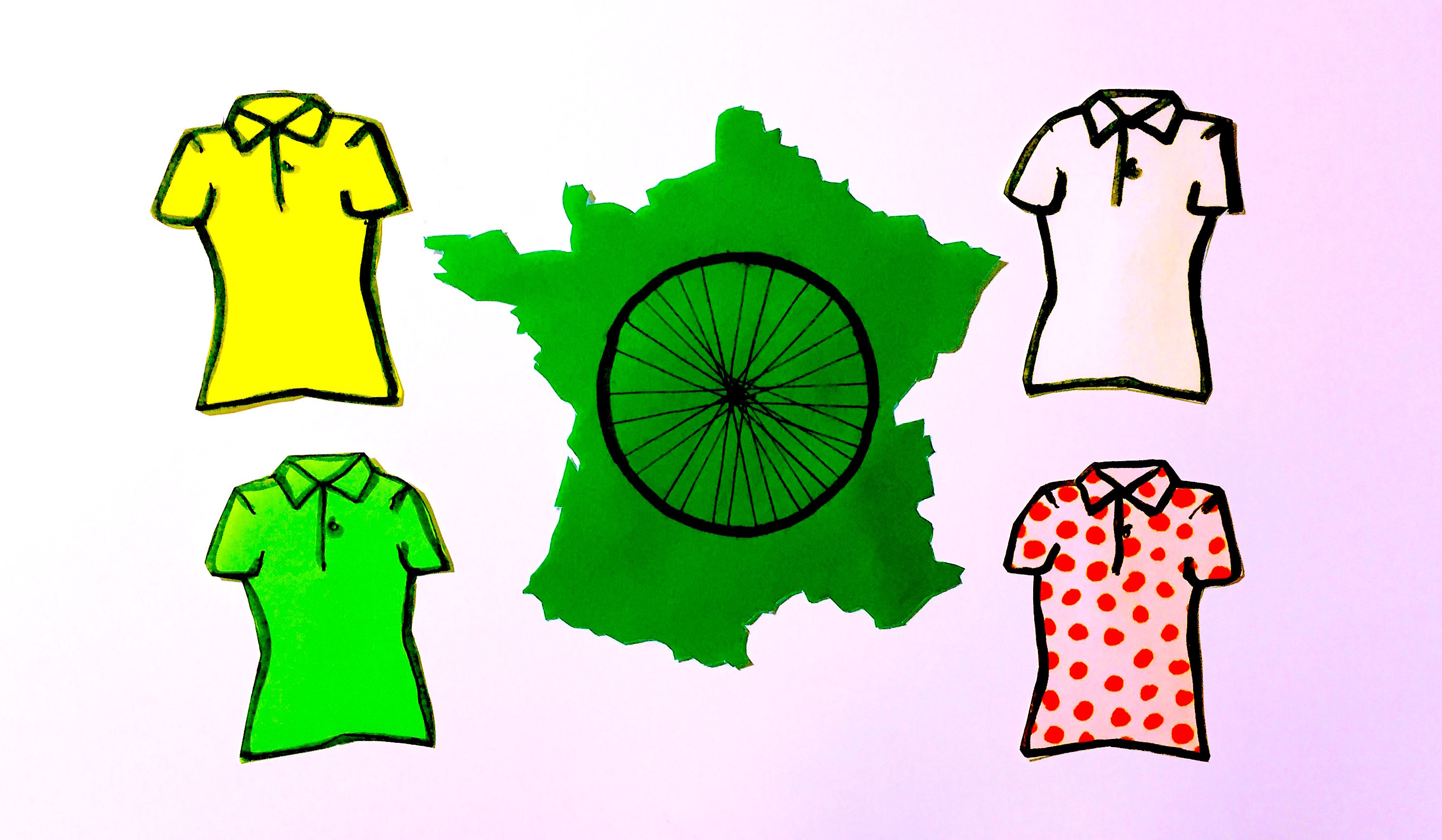 Know your Maillots: How to get Excited for the Tour de France

Cycling is thrilling whether you’re careening down a mountain or dodging cars on city streets. But if you think your morning commute is a rush, we dare you to try following professional cycling.

The Tour de France — the world’s most famous cycling race — starts on July 4th, and if words like peloton and “breakaway” leave you scratching your head, read on.

The Tour is a monster of a race: 198 riders on 22 teams will navigate over 2098 miles, about the driving distance from Washington, DC to Salt Lake City, Utah, over the course of 21 days.

“When I first started watching the Tour de France, it was a curiosity,” says cycling and transportation advocate, avid road cyclist and ardent Tour de France fan Craig Chester. “It goes all around France and the announcer talks about the castles and the landscape.” But he says it wasn’t until he began cycling himself that he really began to get into the details like the stages and team strategy that make the Tour special. “There’s a lot going on,” he explains.

Chester says he first became aware of the race as a child when he spotted a poster of Greg Lemond on the wall of his local bike store. “He was the first American to win the Tour de France,” Chester says, adding “now he’s the only one,” a reference to 7-time champion, American cyclist Lance Armstrong, who was stripped of those titles three years ago for using performance-enhancing drugs.

“[The Tour de France] takes place during the day and stops at night,” says Chester, “but when you’re in an event that long, you never stop.” The Tour includes just two rest days. “Blazing heat, rain, wind, even snow in the mountains, the competition doesn’t stop for weather except for maybe dangerous lightening,” says Chester. “The competitors have to take care of themselves so much. It becomes your life — as a competitor and as part of a team. It’s unique in that way.”
Know your Maillots

Just like other sports, the Tour de France has winners and losers, but with nearly 200 riders spread over miles of terrain, it can be difficult to know who to watch.

The key word here is maillots — the color-coded jerseys that signify the leaders in four separate categories at different points during the race.

Maillot jaune — yellow jersey. The 21-day competition may have 20 distinct stages, but there’s only one winner of the Tour de France and he’s the one wearing the maillot jaune at the end of the race. “Every cyclist dreams of being him,” says Chester, “To wear the yellow jersey under the Arc de Triomphe.” The wearer of the yellow jersey is the cyclist who has the best time over all. The time is recalculated at the end of each stage, so the maillot jaune can change hands several times during the Tour until the last stage, which always takes winners to the iconic podium at the Arc de Triomphe.

Maillot vert — green jersey. This is based on points awarded to cyclists who finish well at certain checkpoints during each stage. Because it’s necessary to outrank the other cyclists when placing at each checkpoint, the quest for this jersey is known as the “sprinter’s competition.”

Maillot à pois — polka dot jersey. This jersey is also called the mountains classification. “Sometimes a rider has no chance of winning the Tour,” explains Chester, “but he might be really good at climbing and have a chance to wear the maillot à pois — the king of the mountain jersey.” This year’s tour will have 7 mountain stages.

Maillot blanc — this jersey is like the maillot jaune only it’s reserved for the best rider under 26 years old, or the best young rider.

Keep an eye out for the riders sporting these, and you’ll be able to start making sense of just who’s who in the giant mass of riders tearing up the roads of France in July.

Speaking of a giant mass of riders, that group is called a peloton. With nearly 200 riders involved in the tour, the peloton is quite a sight from land or air careening through the French countryside. But this is much more than a bunch of cyclists trying to keep up: how cyclists behave in the peloton can have a huge effect on the outcome of the race.

“There’s strategy involved,” explains Chester, “riders save energy. They use about 30-40% less energy by riding in the peloton.”

“The teams are organized in such a way that there are usually one or two riders who are the leaders of the team,” he explains, “the others are called domestiques. They’re out there to help their leader perform the best.” Chester explains that the domestiques or “helpers” play an absolutely crucial role in helping their lead rider win the Tour de France. “They can protect the lead rider and then let him go off on his own when he’s stored enough energy,” he says.
“At some point,” explains Chester, “there will be a breakaway — the best lead riders or group of lead riders and helpers will form a little lead peloton.” This, Chester says, is where the action happens. Domestiques here continue to protect their lead rider and have other functions as well,  such as dropping back to the team car to fetch water.
“When a rider will surge away from the peloton or the breakaway that’s called an attack,” says Chester. It’s that moment when the announcer’s voice gets a little more animated — the success or failure of an attack can decide the Tour for any team.

With three weeks and 2098 miles of race, chances are you won’t be able to watch the whole Tour de France. So what are the different stages and which ones should you be sure not to miss?

The best riders can surge ahead at any stage. “If there are a couple of really strong riders who break away, there might be a sprint at the end of a stage or one rider might dramatically outperform the others,” says Chester.
But there are some parts of the race where the best riders can really shine. “At pivotal stages — like in the mountains — is where the action will happen.” Famous climbs like the Alpe d’Huez, great attacks, descents at high-speed, great performances and neck-n-neck showdowns. “In general,” says Chester, “the race might be won or lost in the mountains.”
Time trials are another great time to watch individual riders. “There are no helpers,” says Chester, “It’s just you and whole open road and you can use a special bike. Time trials are kind of exciting, especially from a fan perspective. You can see each rider come in over the course of a day.” Like in the mountains, he says, Tours can be won or lost in the time trials.
In all parts of the race, one of the things that make the Tour de France special is the fact that fans in France can witness it up-close. “Cycling is so rare because you can watch all the races for free,” says Chester, “you don’t buy a ticket so anyone can just pull up to the road and watch their heroes ride by.”
Overly enthusiastic fans can present an element of danger all their own and it’s commonplace to see spectators crowding the road ahead of a famous rider. “There’s an etiquette and a code, but that said, lately selfies have been a problem,” says Chester, “there’s not security like in a stadium. Marshalls will come by but what they can do is limited.”

Tour de France teams are international and organized by sponsor. A sport that used to be dominated by the French, Belgians and Italians has gone totally global. “Now there’s Spain, the US and Germany,” says Chester, “even Columbia.”

Nairo Quintana, a Colombian rider who is a climbing specialist, is a serious contender for the yellow jersey this year, especially since many believe the Tour de France will be decided in the mountain stages late in the race. Other cyclists to watch include British rider Chris Froome, 2014 Tour de France winner Vincenzo Nibali, and Alberto Contador.

“This year Contador won the Giro d’Italia and he’s going to race in the Tour which is unique nowadays,” says Chester, referring to perhaps the second most important cycling race after the Tour de France,”He’s going for the Giro/Tour de France double which hasn’t been done since 1998.”

A Guardian article that interviewed Froome suggested this year might be one of the most closely-fought Tour de France race in recent history. Pumped yet? In case you can’t fly to France and be a part of the excitement in person, look for our list of places to watch the Tour de France in your city.