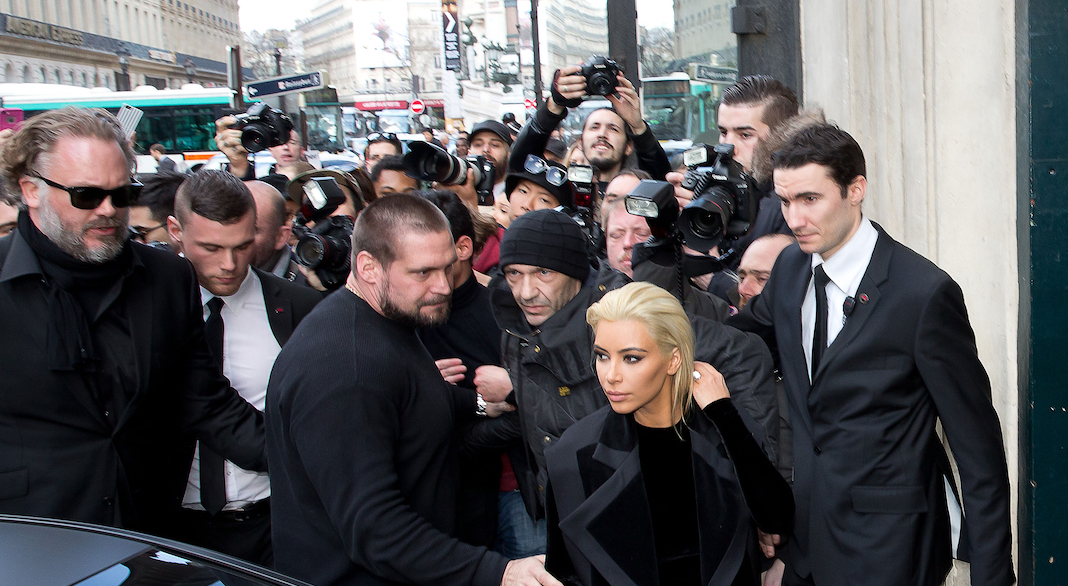 Kim Kardashian is Safe… And So Is France

For the past three days, Kim Kardashian-West has been radio silent on social media. Everyone else in the world has been screaming… about the wrong thing.

On October 3rd, after a night of Snapchatting, five robbers dressed as policemen entered Kim’s room at the No Address Hotel where she was staying for Paris Fashion Week. Held at gunpoint, she was gagged, restrained with duct tape, and locked in the bathroom while the thieves escaped with $10 million in jewelry. (Details are as currently reported by AP Press, but still being uncovered.) Kim left Paris quickly thereafter, returning to New York to be with her kids and husband Kayne West, after he postponed two of his upcoming shows. Sources close to Kim say that this could be the end of Kim’s widespread social media presence. (Cue sad music played by the world’s tiniest violin.)

From Lena Dunham’s support, to Karl Lagerfeld’s condemnation for flaunting her wealth, to Supreme Court Justice Stephen Breyer’s skepticism, referenced during a case hearing (Breyer: “Even Kardashian’s thief, if there is one…”)(note: “if”), everyone’s obsessesing over Kim and her possible social media downfall. It’s okay if we #prayforKim for a bit, but Kim will recover without the support of the world.

7-8% of France’s GDP comes from tourism, and about 2 million people rely on the industry for employment. Since ISIS’s November 2015 attack on Paris, one of several ISIS-related attacks in France over in the past 18 months, France has experienced a 15% decline in the number of tourists coming to France. International publicity has not been good, to say the least. Following the Charlie Hebdo attack, Fox News spread the baseless rumor of the Paris’ dangerous “no-go zones.” Articles titled “Is Paris Safe?” or “How Safe is France?” have become established biannual columns in newspapers and magazines. American students rethink their study abroad plans for France. All of these factors have contributed to eight months of consecutive declines in tourism for Paris.

Johanna Primevert, chief spokeswoman of the Paris police department, says that the attack on Kim should not stop anyone from coming to Paris. “This kind of incident is extremely rare in Paris. Do not confuse what happened to Ms. Kardashian…with the assault of a tourist in front of Notre Dame or another tourist spot in Paris.”

Judging from declining tourism rates, the world is not convinced.

Additionally, the robbery of a high profile American at gunpoint revives the issue of gun control in France. The issue was first really brought into global conversation after Charlie Hebdo in January 2015 and the November 2015 attacks: where did the terrorists get their guns? The process of obtaining a firearm in France and the laws around them are very serious and controlled. Before acquiring the gun, the interested buyer needs a hunting or shooting sport license. Semi-automatic weapons that shoot more than three rounds at a time, and any handgun or rifle with a “military” caliber requires permits. Fully-automatic weapons are illegal for civilians. France doesn’t have the right to bear arms written into their constitution, so purchasing a weapon for personal safety isn’t engrained in their culture the same way.

And yet, in 2012, the French government estimated that there were 7.5 million guns legally circulating in France. The Washington Post reported, “The number of illegal guns is thought to be at least twice the number of legal guns in [France].”

Looking at those numbers, not going to France seems logical. But Americans are engaging in a double standard. Consider the statistics on violence in France compared to those in America.

In 2010, the number of gun deaths by firearm in France was 0.2 per 100,000 people. That same year, the U.S.’s number of gun deaths by firearm was a little over 2.8 per 100,000 people. So you’re 14 times more likely to be killed by firearm in the U.S. than in France. According to Le Monde, there are 31.2 legal weapons for every 100 people in France. In the U.S., we have 101.1 legal weapons for every 100 people. That’s more weapons than people. In the November 2015 attack, 130 people died, which is about as many gun homicides France normally has in a year, but the New York Times reported that even if France had a killing of that magnitude every month, “its annual rate of gun homicide death would [still] be lower than that in the United States.” Still think that France is unsafe?

Kim K. probably had the worst night of her life on October 3rd, and Frenchly wishes her much rest and mental peace in the future. (Don’t blacklist France, Kim. It’s lovely, we swear!) But in line with what the spokeswoman of the Paris police department said, don’t make this another excuse not to go to France. Besides, Kim doesn’t want us all enjoying her presence (at least, not anymore), and France does.

Go to France, stay in a hotel, contribute to their tourism industry. Worry about guns in both the U.S. and France, but don’t let imaginary heightened danger be an excuse not to go to France. Americans are just as likely to die of hypothermia as be killed by a gun in France; the excuse is just not valid. Let Kim recover, and shift the celebrity gaze to Usher, the American rapper who is a regular at No Address Hotel. In Paris after Kim’s robbery, he proudly proclaimed,“I feel more secure than ever, absolutely [safe].”