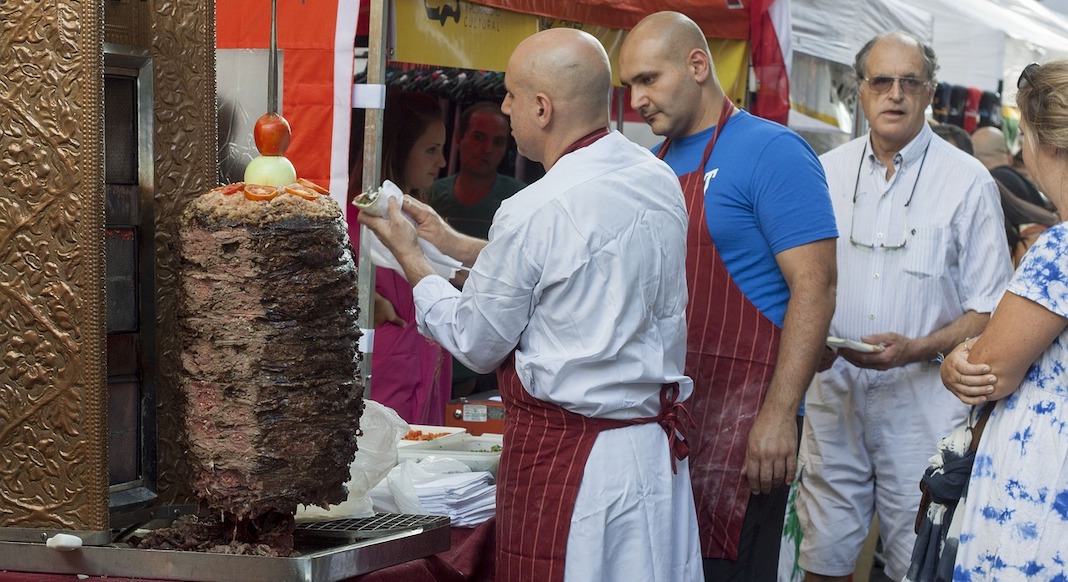 In France, rotating spirals of meat and flickering neon signs advertising KEBAB dot the streets, their presence almost as ubiquitous as the boulangeries or local marchés. This Middle Eastern-adapted meal—gyro meat generously stuffed into pita and doused in thick sauce—has become wildly popular in recent years for its delicious, greasy taste and affordable price.

The kebab’s success has also catapulted it into the middle of France’s burgeoning identity crisis.

Kebab restaurants first came under attack in 2013, when far-right politicians and bloggers declared war on the country’s so-called “kebabization” (i.e. traditional French culture being overtaken by non-European cultures). Kebab shops, with their Arabic signs and workers hailing from the Middle East and North Africa, were demonized. In local elections, candidates looking to gin up support began pandering to fears of too much immigration, too much Islam, and altogether too much kebab. In many parts of the country, the anti-kebab campaign worked.

Robert Ménard was a key figure railing against France’s changing demographics. Like many other ultra-conservative politicians, he used kebab shops as tangible evidence to claim that France is spiraling away from traditional values, one Arabic-style frite at a time. He won the 2014 mayoral race in the southern city of Béziers (a stronghold for the far-right nationalist party, Le Front National) and, in 2015, declared that no more kebab restaurants would open in the city.

The fight against the kebab is synonymous with the nationalist, traditionalist call to action against people of Middle Eastern and North African descent, whom have been broadly deemed “immigrants” though many are French citizens. For many, it’s a euphemistic way to criticize Muslims: it’s easier to speak outwardly and harshly about a food, rather than the group it has come to represent.

The kebabization claim highlights a larger paradox with which the country struggles. Traditionalists assert that kebabs are decidedly un-French because of their roots outside of France. Yet the kebab wouldn’t be so prominent in France if it weren’t for France’s official policies of colonization in the 19th and 20th centuries. Many of the French citizens who make up this kebab cohort are North African migrants (or their descendants) whose countries of origin were forcibly linked with France during the colonial era. So just as France irrevocably changed North Africa, immigrants and French citizens of North African descent are changing France. When this colonial history is taken into account, kebabs represent post-colonial France, a France which can’t—and shouldn’t—separate itself from its significant Muslim and immigrant populations. The sandwich simultaneously represents the struggle of immigration, and tells stories of integration.

While many far-right politicians and nationalists perpetuate the history-neglecting position of kebab-hating (Ménard himself was a pied noir, born in colonial Algeria to European parents), not everyone in France resents kebabs. In response to Ménard’s rampage against kebabs and Muslims, protestors planned an “International Festival of Kebabs” in Béziers. Though the day didn’t garner the same attendance that its Facebook event promised (reporters actually called it a “non-event”), the support clarified the opposing positions: FN supporters stand with xenophobes in one corner of the ring, fighting for “traditional French values”, and those who support multiculturalism and delicious sandwiches find themselves in the other.

This year, the major kebab-condemning group Le Front National legitimized itself in the public eye, becoming the primary opposition party in the presidential elections. Although their candidate Marine Le Pen lost to centrist Emmanuel Macron, her success in the first round and the recent increase in xenophobia in France means that, even though the anti-kebabization rhetoric has faded, the sentiments behind it are still present.

The good news is that the campaign of Ménard and his cohorts specifically against the kebab seems to have met the same fate as Le Front National in the presidential and legislative elections: although attractive to an ultra-conservative base, it ultimately could not gain the public’s support. Students continue flock to late-night kebab shops, workers stop by for a quick lunch, and foreigners enjoy the unique-to-France kebab—a variation of a Turkish doner kebab, transformed and influenced by the substantial North African population. Just like France’s multicultural population, the kebab isn’t going anywhere.