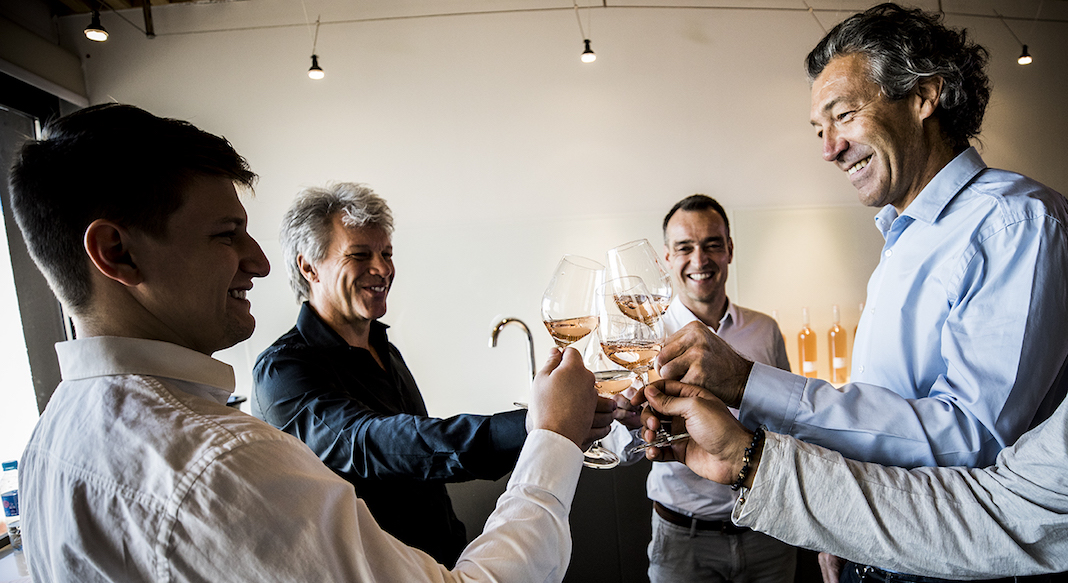 Jon Bon Jovi is Launching a “Made in France” Rosé

“It’s my life” sang Jon Bon Jovi in 2000. Eighteen years later, the American rockstar has chosen to split his life between music and wine.

The 55-year-old musician announced the launch of his own rosé, available starting February 23 in the United States. Produced in the Languedoc region of France, this rosé was born thanks to a meeting between Bon Jovi, his son Jesse, and winegrower Gérard Bertrand. “We were introduced by a mutual friend a year ago. We had a chat over a drink. I discovered a lot of commonalities between us. Bon Jovi is a man with a passion for his job and a love of detail,” explains Bertrand. Passionate about music, the 53-year-old Frenchman organizes a jazz festival every year on his property, Hospitalet, in Narbonne.

“We had tested a lot of rosé in France, but we couldn’t find the right one. Until we met Gerard,” recalls Jesse Bongiovi. Bon Jovi’s second child, 23 years old, did not choose to pursue music but rather entrepreneurship. He teamed up with his father to develop the product. “I’ve been working there full-time for the last eight months. I’m in charge of the daily operations: shopping, making the rosé known. My father is involved at a higher level.”

Known as “Diving into Hampton Water,” the rosé refers to the Hamptons, located on northeast Long Island in New York. It’s the place where the Bongiovi family used to spend their holidays. “It’s a lifestyle very similar to that found in Languedoc,” emphasizes Jesse. The Hamptons are also home to many vineyards.

Of Languedoc appellation, this “premium” wine based on cinsault, grenache, and mourvèdre will be sold for $25 on the American market. “It’s a light and fresh rosé, which then reveals more vibrant and intense notes,” summarizes Bertrand. “It ultimately looks like a song, from the intro to the chorus.”