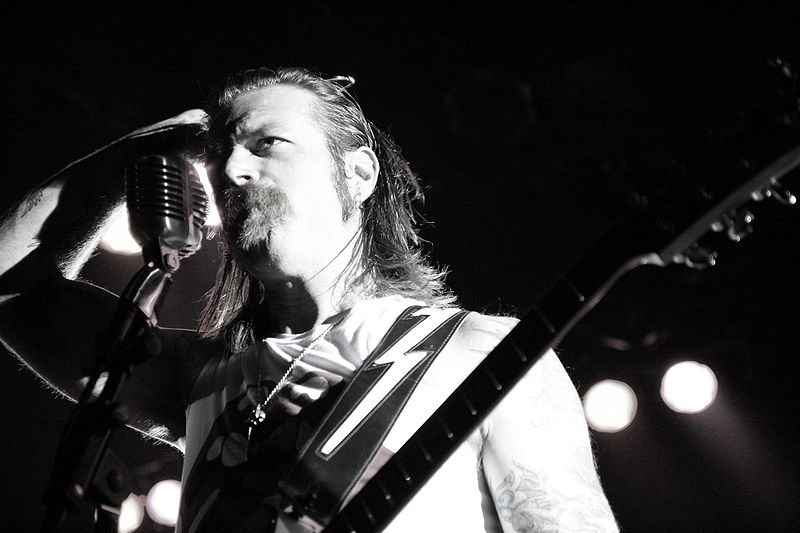 Jesse Hughes Speaks Ahead of Eagles Of Death Concert

Tonight, the Eagles Of Death Metal are returning to Paris, playing the Olympia barely three months after gunmen massacred fans of the band at Le Bataclan. Frontman Jesse Hughes told iTELE yesterday that it was important to “finish this set, so everyone can leave some of this bad stuff behind,” he said, and lightly pounded his heart, “and make more room in here for better stuff.”

Interviewer Laurence Ferrari asked why this show was so important to finish.

“For me, I can’t let the bad guys win,” Hughes said, “and I have to be with my friends again. And we have to finish this—not for anyone else, more just for us. Of course, I’m talking about everyone that was at the Bataclan, you know, and it also seems, by extension, everyone that was watching. This was the only I could do, personally, to begin to get myself better.”

Hughes was repeatedly brought to tears during the interview.

“I haven’t had any nightmares, and I’ve slept fine,” he went on, his voice breaking, “but when I’m awake is when I see things that are nightmares. And I thought that talking about it would make it easier, I thought that expelling it from inside of me would make me less like this, but it’s not.

“There’s really no frame of reference for this at all. I wish it would just go away.”

“I think the Bataclan was targeted for its support of Israel, for the simple fact that there are folks who might be Jewish who own it, and I think that’s rather clear. But the way I was raised, an attack on one of us is an attack on us all.”

Hughes said that he didn’t think the “scumbags” had any real idea what or who it was that their “puppetmasters” had chosen to target when the November attacks were planned. “I think these pieces of fucking shit didn’t know who they were messing with,” he said, referring to the fans of rock ‘n’ roll.

“I would stay here and meet every single person, if I could do that. It might make me feel better. Because I don’t know what I’m suppose to do, that’s the problem. I know I’m supposed to do something, I just don’t want to let people down.”

Security at the Olympia tonight will be understandably high, with additional security in the area around the famed Paris venue.

“I don’t think love overshadows evil,” he responded. “I fucking know in the core of my heart that love does.”

But a gun might be nice, too. Ferrari asked if the attack has changed his views on gun control. Hughes is a staunch advocate of gun rights and ownership, and can be seen in the film Redemption For The Devil showing off a scar from a .22 bullet that hit him during a “gang-related” incident:

That taught me a big powerful lesson: It wasn’t the guns that hurt me, it was bad behavior and the inability to be responsible for yourself,” he says in the movie. “If it hadn’t have been a gun it might’ve been a car, it might have been a fucking knife, or a baseball bat.”

“Gun control kind of doesn’t have anything to do with it, but if you want to bring it up, I’ll ask you: did your French gun control stop a single fucking person from dying at the Bataclan? If anyone can answer ‘yes,’ I’d like to hear it.”

“I think the only thing that stopped it are some of the bravest men I’ve ever seen in my life charging head-first in the face of death with their firearms. Maybe… I know people will disagree with me, but it just seems like God made men and women, and that night, guns made them equal. And I hate it that it’s that way. I think the only way my mind has been changed is maybe that, until nobody has guns, everybody has to have them. Because I don’t want to see anything like this ever happen again. And I want everyone to have the best chance to live. And I saw people die that maybe could have lived.”

“So tomorrow night, I don’t want anyone thinking about guns. I want them to walk in that door, I want them to check their politics at that door, and I want them to come in with us and shake their titties and their ass and have a good time. Especially breasts. I’m just trying to keep it light, you know?”