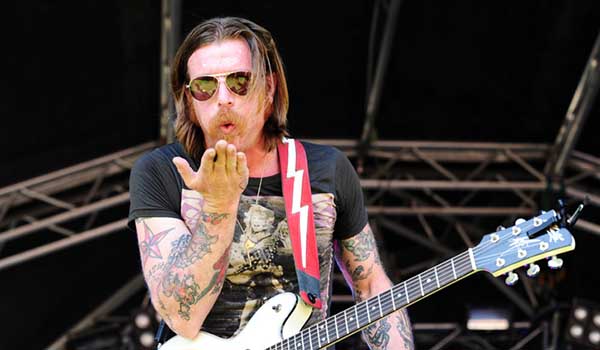 Jesse Hughes, frontman of the Eagles Of Death Metal, spoke with Fox Business Network about the attack at Le Bataclan, hinting that absent security guards knew about the impending massacre.

“When I first got to the venue and walked in, I walked past the dude who was supposed to be the security guard for the backstage. He didn’t even look at me. I immediately went to the promoter and said, ‘Who’s that guy? I want to put another dude on,’ and he goes, ‘well some of the other guards aren’t here yet,’ and eventually I found out that six or so wouldn’t show up at all,” Hughes said, adding, “It seems rather obvious they had a reason not to show up.”

The owners of Le Bataclan were quick to respond, understandably. “Jesse Hughes spread some very grave and defamatory accusations against the Bataclan teams,” a statement read. “All the testimonies gathered to this day demonstrate the professionalism and courage of the security agents who were on the ground on November 13. Hundreds of people were saved thanks to their intervention.”

Only last month, Hughes told iTELE, “I think the only thing that stopped it are some of the bravest men I’ve ever seen in my life charging head-first in the face of death with their firearms.”

Update, March 12th: Hughes has apologized for his statements on Fox Business Network, saying, “I humbly beg forgiveness from the people of France, the staff and security of the Bataclan, my fans, family, friends and anyone else hurt or offended by the absurd accusations I made.” He said that the comments came from his ongoing trauma from the November attacks and that his sentiments were not shared by the rest of the band. “The shame is 100% mine.”

“My suggestions that anyone affiliated with the Bataclan played a role in the events of 13 November are unfounded and baseless—and I take full responsibility for them.”