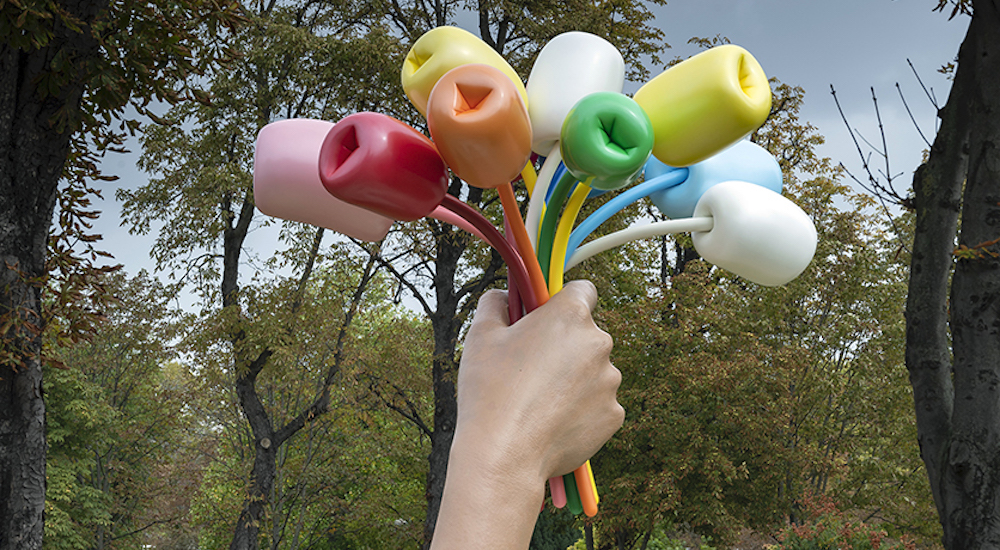 Jeff Koons Unveils His Controversial Tribute to Paris: “I Gave My Time, Three Years of My Life”

On October 4, 2019, a sculpture by Jeff Koons, Bouquet of Tulips, created in 2016 by the artist as a tribute to the victims of the 2015 terrorist attacks in Paris, was inaugurated on the Champs-Élysées behind the Petit-Palais. The work has been the subject of much controversy, including about its original location between the Palais de Tokyo and the Musée d’Art moderne de la ville de Paris.

“I had nothing to do with the choice of this first site,” says Jeff Koons. He adds: “Art is something that goes beyond us, by means of transcendence, and when you experience it, you want to share it with others. Doing this work and communicating this message to the French people goes above all the controversies. I think there was a misunderstanding from the beginning, but my intentions were there. Establishing this dialogue is what is important. There was also a misunderstanding about the size of the work. But today, I couldn’t be happier than with this site and this realization.”

In her inaugural speech, the mayor of Paris, Anne Hidalgo, also referred to the controversies as “an initiatory rite,” like a rite of passage. “Because Paris passionately loves controversies. That’s the way we Parisians are, we French people.” She also compared the controversy to the debates generated by the Eiffel Tower, by Buren’s Columns at the Palais-Royal or by I. M. Pei’s pyramid at the Louvre, before saying, “I didn’t want to miss out on a gift from Jeff Koons.”

As for the balloon-shaped tulips, they are for him like a symbol of humanity: “Like man, balloons are filled with air. Filling with air is a symbol of life. When you die, you take your last breath. I decided to render eleven of them. A dozen is a complete, full set. Eleven tulips give a sense of loss, of missing. But above all, the bouquet is the symbol of a gift. To offer a bouquet to someone, to give a gift, is to be in solidarity. The French and Americans have been in solidarity for centuries.”

This “gift” has also been controversial because of its manufacturing costs, most of which are covered by American and French donors, apparently for a total amount of $3.5 million. “There is a belief that I simply donated the concept. In fact, I was asked to do a work and was told that donors would contribute to its production. It’s really a very normal thing to do for a public sculpture. Picasso offered the city of Chicago the design of one of his sculptures and the city paid for its production. For the Statue of Liberty, the Americans paid for the base of the sculpture and others paid for the production. I gave my time, three years of my life. I never received any money, no reimbursement for the production costs involved in the preparations in my studio. I gave 80% of the royalties of the work to the families who were victims of the attacks and 20% to the city for the maintenance of the work. I was very surprised by the controversy. I really paid special attention to this piece. Whether it be the choice of the hand or the position of the balloons, for example.”

It is clear that today Koons, with his highly publicized auction record of $91 million in May 2019, embodies, for the general public, what is known as art-business. Yet, he did not receive any of that $91 million. Moreover, while it is undeniable that he enjoys professional and financial success, Koons, unlike other star artists such as Damien Hirst, for example, has a particularly limited production of sculptures, as the pieces require a very long production time.

Finally, the innovative nature of Bouquet of Tulips should be highlighted. This is the first time Koons has imagined a metal work with a hyper-realistic detail such as the hand. At the end of the inauguration, one of his merchants, David Zwirner, commented: “I like it when Jeff has this little anomaly that makes you feel a little uncomfortable, that makes you wonder. Here, it’s the hand that plays this role. Art is made to question oneself.”