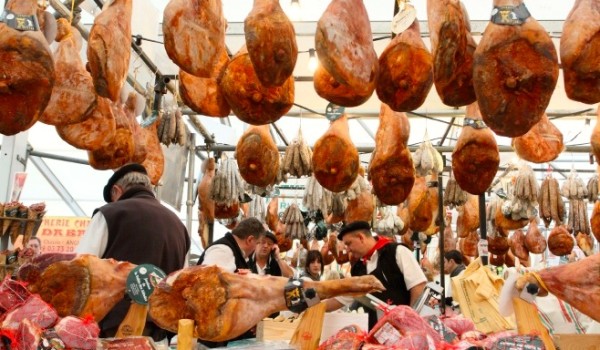 Jambon de Bayonne — Bayonne Ham — Has Arrived in the US

The culinary pride of Southwestern France, it’s not a reach to think of jambon de Bayonne as the Champagne of ham. The result of a thousands years of expertise in raising pigs and curing their meat has resulted in a product that its website describes as a “flower of French gastronomy” (yes, with its “protected geographical indication,” the jambon de Bayonne has its own website).

Now, just as we can drink the fruits of the Champagne region and all its savoir faire, Americans can also enjoy the ham that was once a staple on the tables of French nobility and is celebrated with its own festival even today. The very first jambons de Bayonne arrived in the United States just weeks ago, and producer and Bayonne champion Dominique Duprat couldn’t be happier. “We’re going to be the first French meat product on the American market!” he exclaims, “It’s a big deal!”

Last July, producers like Duprat won permission from US authorities to export their product to the United States. Until then, like so many types of charcuterie, ir was barred from entry to the US.

All the better to make Americans’ mouths water. “We’ve started to get orders and if all goes well, the jambon de Bayonne will be in stores by the end of August,” says Anne Letourneur, director of sales for Delpeyrat, “We started with New York,” she continues, “we’ll be at Fairway and other high-end supermarkets and restaurants. We’ve also made an agreement with Kayser for them to launch a jambon de Bayonne sandwich. We met with Daniel Boulud, who is thinking of including it in future menus.”

“Our goal is for Bayonne to take its place among Parme ham and Serrano,” says Xavier Brun, export director for Fromi, which will be exporting Les Salaisons de l’Adour jambon de Bayonne to the US.  Delpeyrat already has some numbers in mind: they hope to move some 250 tons of this French delicacy.

“Parme ham sells 2500 tons per year, so that number seems completely attainable,” says Duprat. To that end, a marketing campaign is being launched by the Consortium of Jambon de Bayonne.

Look for this French newcomer to your local charcuterie counter! And in the meantime, check out this short video on the legend of how jambon de Bayonne came to be. It involves a hunt, a spring, and the boar that got away…