Though the noun “expatriate,” referring to the person and not the act, is an American invention, and the word “expat” was coined in the U.K., it is a term and a concept intrinsically linked with France.

Though once used indiscriminately in the same way we use “immigrant” now, the expression took on a new meaning between World Wars, in 1920s Paris. The Lost Generation, comprised of artists and writers like F. Scott Fitzgerald, Pablo Picasso, and Gertrude Stein, redesigned the way we view wealthy Westerners who decide to take a break from their country of origin.

But what exactly made these people “expats” instead of “immigrants”? These two words, which should be interchangeable, carry extremely different connotations. When you google “expat France,” you get a series of “Top 10 Tips” lists, advice columns on making friends abroad, and blogs by quasi-Instagram models explaining how moving to France changed their lives. But when you sub in “immigrant” for “expat,” the search results are a little different: news articles about kids sleeping on the streets, the “immigration problem” facing Europe today, and dense PDFs explaining French immigration law.

Even high caliber news organizations, whose very reputation relies on an absence of bias, fall prey to this subtle linguistic discrimination. A 2012 New York Times article, “French Expatriates Flocking To Hong Kong,” discusses a mass migration of French nationals to China, referring to them as “expatriates.” Yet a 2016 article by the same newspaper reporting on Chinese immigrants living in France is titled, “Killing of Migrant Forces France to Confront Treatment of Chinese.” The deceased in question is referred to as a “migrant,” and the Chinese communities in Paris are referred to as “immigrant groups.” Thus, a French person in China is an expat, while a Chinese person in France is an immigrant. 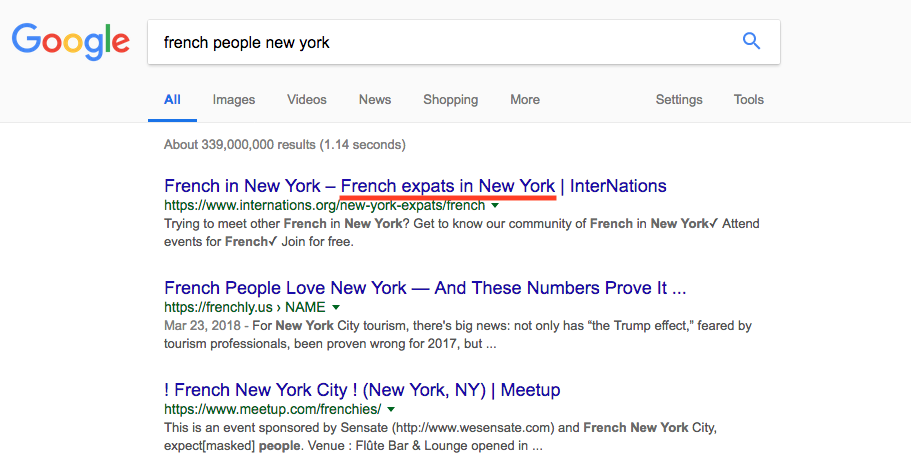 The swap works in the U.S. as well. Try googling something like, “French people New York.” The top search result includes the words, “French expats in New York.” But when you type, “Mexican people New York,” the first result is, “What New York City Neighborhoods Do Mexican Immigrants Settle In?”

The earliest known use of the word “expatriate” was in a book called The Expatriates, published by America writer Lillian Bell in 1900. The book was a brutal evisceration of Americans living abroad, specifically in Paris, that made expats out to be selfish rich brats who scorned humble American ideals in favor of unrestrained hedonism abroad.

The first use of the word “expat” was in a poem of the same name written by British poet D.J. Enright in 1962. The term was used at the time mostly to refer to Brits who were sent by their employees to British colonies for business purposes. This was a crucial defining moment for the term, since it de facto defined an expat as a wealthy European with the right to take up residence in a foreign country, though his new neighbors might not be able to do the same if their situations were reversed.

The distinction between “expat” and “immigrant” is hardly semantics. These words carry significance, and one is much more critical than the other. Just look at some of French president Emmanuel Macron’s immigration policies, which deliberately hamper migrants and asylum-seekers from poorer countries from legally settling in France. “If it’s an economic migrant who doesn’t face danger in his country, then it’s not France’s responsibility to take him,” Macron said in a memorable 2018 speech. Yet at the exact same time, the French president has been trying to seduce a different kind of economic migrant: wealthy businessmen from countries like Britain and the U.S., who bring their money with them when they move companies to France. One Forbes article explained how Macron’s new economic reforms are helping to draw wealthy expats in to build start-ups in France, with the article even referencing the “series of Lost Generations” that France has experienced thanks to French expats leaving the country for “greener” pastures.

As a voluntary act of uprooting, the concept of “the expat” typically insinuates youth, money, and education. Though “expat communities” are large and fruitful in places like Paris, they are generally assembled piecemeal, with individuals coming on their own and happening to fall in with a certain crowd. Older people are less likely to be expats, since moving an entire family to a new country is so much more complicated than moving a single person.

This is why the expat is such a romantic figure — he or she tends to be young, unencumbered, and thus completely open to new experiences. A lone soul seeking adventure or career advancement, making it on their own while wading through culture shock, language barriers, and the very real threat of homesickness.