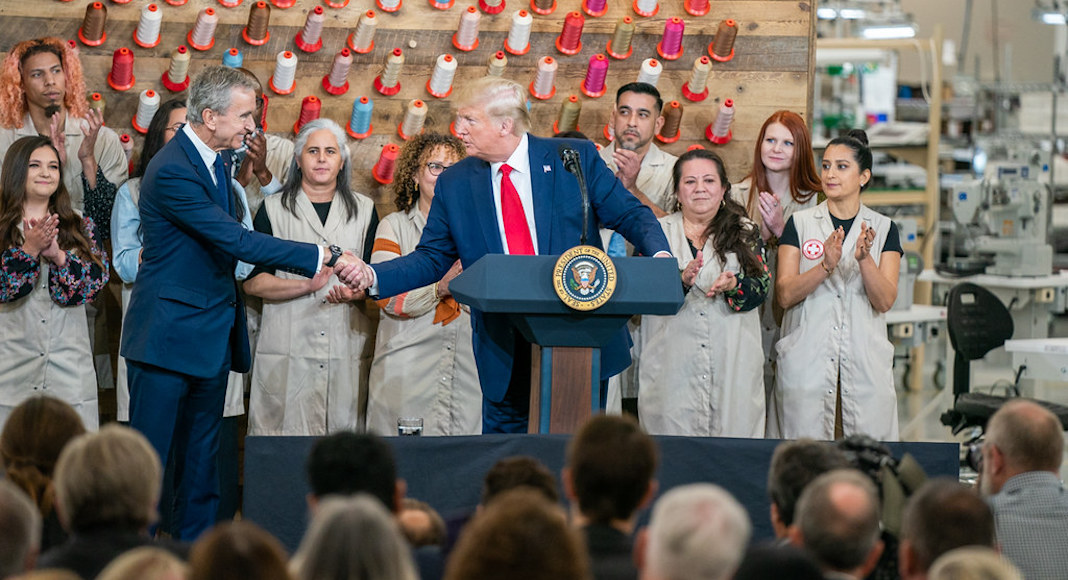 In Texas, Trump Attends the Inauguration of a Louis Vuitton Factory, Criticizes Macron

On Thursday, October 17, Donald Trump opened a Louis Vuitton workshop in Alvarado, Texas, in the presence of Bernard Arnault, CEO of the French multinational corporation LVMH.

“You’re an artist and a visionary, and I want to congratulate you because this is a great vision that you had for the state of Texas and for our country,” the American president said at the inauguration. “Louis Vuitton — a name I know very well. It cost me a lot of money over the years,” he added humorously.

The new Alvarado workshop represents a $50 million investment for Louis Vuitton and is expected to have 1,000 employees within five years. “Today, we continue the extraordinary revival of American manufacturing,” noted Trump, who stressed the brilliant results of his administration. “Ivanka is responsible for 14 million jobs this year, over the last couple of years, with companies going out and training people. And it’s been an incredible success.”

Trump added that this new production unit will employ “500 of the most highly skilled workers anywhere in the world,” and that “no one can match the precision and perfection of an American artisan.” He also assured that the employees would all benefit from “great pay, quality healthcare, 401(K)s. And, by the way, the 401(K), since my election, have gone through the roof. And nobody wants to seem them be cut in half,” referring to the strong stock market figures on which the 401K is indexed. “When they go and get to go and press that lever to vote for who — I have a feeling we’re going to do very well,” he concluded.

At the end of the speech, Trump mentioned the name of this new workshop, Rochambaud Ranch — which refers to the name of the commander who led the French troops during the American Revolutionary War — and pivoted to discussing France. “France remains not only our oldest ally, but one of our most trusted and cherished. We have a great relationship with France,” he began, before taking a jab at French President Emmanuel Macron. “We have our little disputes with Emmanuel every once in a while. Say hello to Emmanuel,” he told Arnault. “But we’re doing very well, and France is a great country and a wonderful group of people.” And then, “I like your President very much.”

Asked later same day by a French journalist about the reasons for the low unemployment rate in the United States compared to France, Trump was relentless in his response, “maybe we have a better President than you do.”