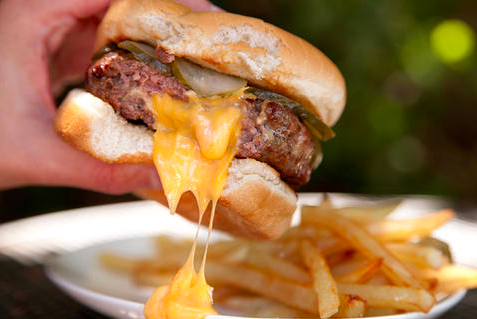 All Hail Zee Burger: the Culture Wars Are Over Between France and the U.S.

Breaking news: the French ate nearly one billion burgers in one year. The numbers are in for 2013 and it’s not looking good for the ham sandwich lobby. Last year the French consumed over 970 million hamburgers. But no one’s freaking out. That’s the breaking news part. But as usual, because this is France, it’s about a lot more than food.

The French are now openly indulging in what they’ve secretly inhaled for years: fast food. France has always been a big market for McDonald’s. In terms of numbers of restaurants, it’s the 6th biggest market in the world and the second in Europe, after Germany (and ahead of the UK, where you might have imagined a solid Anglo-Saxon appetite for beef patties). Burger King came back into the French market just a few months ago after having called it quits and pulling out in 1997. They reopened in central Paris to long lines and lots of excitement. Yes, this is the effect of the Whopper in Paris (I don’t even know how to say “flame-broiled” in French, but evidently they like the way it tastes).

So who cares? Remember in France, it’s never just about food. It’s a massive bulldozer of a symbol when the burger, the most symbolic incarnation of the United States—and everything that the French both love and deride about the US—upstages the ham baguette sandwhich, the quintessential emblem of the Frenchest of French lunches (it still is France’s favourite lunch, representing 58% of all sandwiches consumed). Normally, this ought to worry the French, it ought to prompt protectionist legislation, civic activism, a campaign to defend the national gastronomic patrimony besieged by the steamroller of consumerist globalization (not unlike the way legislators and activists defend the French language from the invasion of English, which I wrote about last year).

It’s all the more surprising that it’s not prompted the usual soul-searching—what’s become of French values and French identity?—because until very recently the French still were defensive about their jambon beurre (that’s the name of the ham baguette sandwich, also called the Parisien, which consists of a few slices of cooked ham wedged inside half a buttered baguette). When these same numbers came out comparing jambon beurre to burger consumption in 2009, headlines were triumphant, even triumphalist, with that little tone of superiority that always gives away the true complex of inferiority quietly gnawing away at French self-esteem: “In France, the Jambon Beurre Knocks Out the Hamburger!” At the time, for every one hamburger consumed in France, there were eight sandwiches eaten. Take zat.

To understand the symbolic importance of the jambon beurre it’s important to know that the ham on buttered baguette sandwich is so widely and commonly consumed in France, they even talk about the jambon beurre index. It’s the French equivalent of the Big Mac index, a concept created by The Economist magazine in 1986 as a way to compare purchasing power all over the world (For example, the average price of a Big Mac in the U.S. in January was $4.62; in China it was only $2.74). The jambon beurre is as intensely local as the Big Mac is global, and the jambon beurre index can tell you how much further your Euro will go in different regions of France.

In case you’re wondering, you get the most ham sandwich for your money in the small town of Douai, in the chilly northernmost region of Nord-Pas de Calais, where ham and butter on baguette costs, on average, 2.22€, compared to Paris’s 3.29€. The most recent jambon beurre index also showed that the price of the sandwich is going up, and at a faster rate than other lunch foods.

Douai, in the north. Home of the cheapest ham sandwich in France.

But nobody seems all that worried that the French are eating fewer, more expensive jambon beurres. Instead, new hamburger restaurants are opening all the time, new burger blogs are being launched, everyone is trading names of new burger places and high-end hipster burger trucks. “American”-themed restaurants, like Lefty and Razowski’s, are also in fashion, featuring many (or mostly) burgers. American food has become cool. Or rather it’s become cool to openly like it (as opposed to openly disparaging and secretly loving it).

It’s not a new trend: you have to have been living under a vegan rock not to have noticed that, in Paris, over the past few years the burger—and eating and knowing about burgers—has become a full-on hipster trend that’s now migrated into the mainstream. Culminating in this recent news of 2013 as the banner year of French burger consumption.

But here’s the key adjective in the previous sentence: French burger consumption. The burger may be American, but the French eat it their way, and only 38% of those nearly billion burgers are actually fast food joint burgers. The rest of the burgers are being consumed in proper sit-down restaurants and probably, as the French are so quaintly wont to do, with a knife and fork. And prepared with ingredients like Normandy beef and unpasteurized blue cheese from the Auvergne region in central France or fondue cheese from the Alpine Savoie region.

In brief, all this means the French are…relaxing. It’s no longer automatically degrading and totally unallowable to like hamburgers, formerly the symbol of all that was wrong about America and better about France. The French are globalizing, and, in this case, without any recriminations or spasms of doubt. They’re cool with hamburgers now; no furtiveness or derision. Just pleasure.

There are undoubtedly limits. Chances are this best-selling accessory in the US, a kitchen utensil that allows you to stuff burgers with shredded cheese, inspired by a cheeseburger called Juicy Lucy allegedly invented in a bar in Minneapolis, will undoubtedly and thankfully never ever make it to France (Note: it’s is a cheeseburger that has the cheese inside the meat patty rather than on top, resulting in a molten core of cheese within the patty.) Because that actually would be the end of everything.

Meanwhile, at least when it comes to zee burger vs. zee jambon beurre, the culture wars are over.