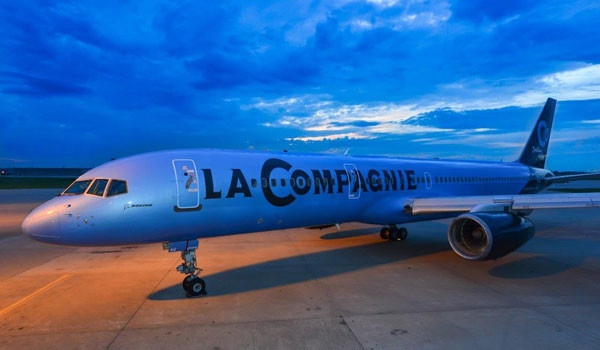 Fly Business NYC-Paris for Less with La Compagnie in August

There’s a new all-business option to Paris in town — La Companie took off for the first time last Monday from Charles de Gaulle after a wait for US federal approval forced a slight delay. But La Companie’s loss is your gain if you’re looking for a way to get to the City of Lights this summer: to fill its airplanes, the new airline is lowering prices for August.

One off the newest additions to the “low-cost Business class” sector, La Companie runs just one airplane, with another slated to take off from New York at the end of the year. On board you’ll find 74 seats that all recline 180°, business class-level service provided by three hostesses and stewards, and Samsung Galaxy tablets available for entertainment.

But it’s the prices that really set the new company apart: they claim to offer rates 35%-50% lower than their competitors for direct flights. So far, La Compagnie seems to be making good on this promise, if not surpassing it. Several models for the month of August show that La Compagnie’s rates are well below those of other “business class” airlines, and even rival certain airlines’ economy class rates.

For example, a round-trip ticket leaving New York on August 6th returning on August 25th will cost $1,377 (taxes included) at La Compagnie (that is to say, the cheapest ticket with change/cancellation fees). It’s certainly $300 more than the very economical XL Airways ($1,022 per person), but it’s also around the same price of an economy ticket from Air France ($1,355). Furthermore, the new airline beats the “premium economy” tickets from British Airways ($2,359) and Air France ($2,433), both of which offer a bit more space than an economy ticket, but not a completely reclinable seat.

The price comparison between different companies’ “business class” rates is even more favorable for the new airline: business class tickets at other companies are 6 times as expensive, with Air France offering $8,275 and British Airways offering $8,292. For a ticket bought later in the month, the price difference drops considerably, but La Compagnie’s tickets are still 3 times cheaper at the end of August ($3,700 for an Air France ticket from August 18th to September 2nd versus $1,377 for La Compagnie). The new company doesn’t promise the same comfort and as its prestigious competitors, “but the best relationship between quality and price in business class,” emphasized at the launch by Peter Luethi, co-founder of the company. At this price ($1,377), there is an additional fee of $300 to change the ticket and $500 to cancel.

Finally, for lovers and other who travel in pairs, La Compagnie is presenting an additional offer: round-trip tickets or two will cost $2,014, or $1,077 a person for a Business class flight! These tickets are valid (subject to availability) until August 30th for a trip made before September 15th, 2014.