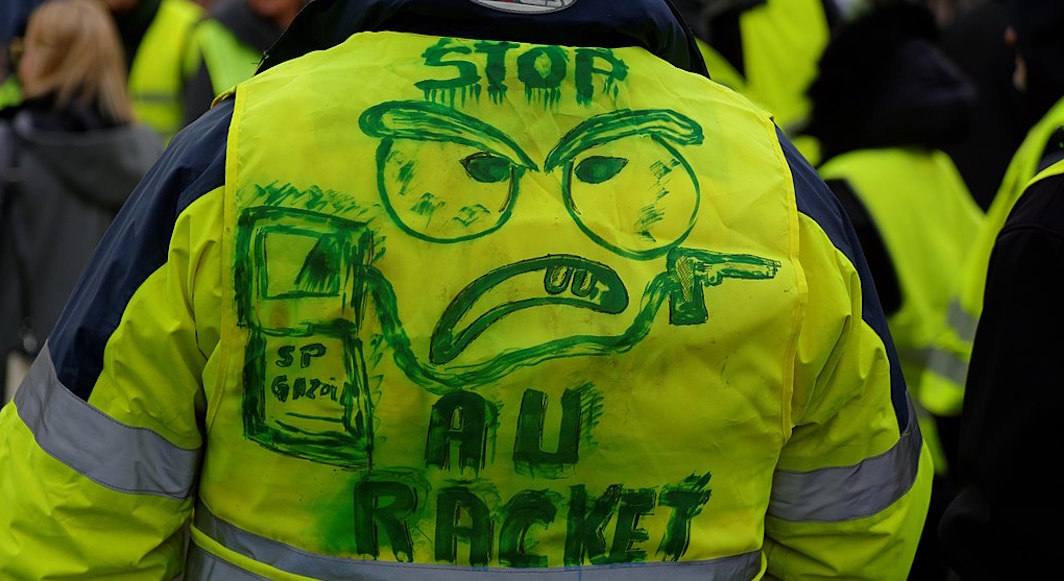 In the US, the Gilets Jaunes Are Few, Yet Very Motivated

How to organize a gilets jaunes (yellow vest) demonstration in the United States when you don’t have a… yellow reflective vest in your car? “I’ll go find some at Home Depot,” says Arno Fortelny. If this app developer living in Brooklyn has the answer to this question, it’s because he’s the organizer of the gilets jaunes demonstration on December 22 in front of the French consulate in New York, in “solidarity with our brothers in France” and to “encourage them to continue” the fight.

“I’m not a professional activist. When I heard about the movement in France, I looked online and saw that there was nothing in New York. I thought I could start something. If it doesn’t work, at least I’ll have made some friends,” he explains.

Involved in the socialist group Democratic Socialists of America (DSA) and a disappointed supporter of Barack Obama, Fortelny is Austrian, not French. He arrived in the United States at the age of 13. “Gilets jaunes are a powerful movement. It’s not supported by trade unions,” he says. “We’re living in a dangerous time. We see it with Trump in the United States, Brexit, Le Pen who almost came to power in France… People on the right and on the left agree that neo-liberalism doesn’t work.”

Like him, others in the United States were inspired by the French movement. Different groups are being set up around the country, in Michigan and also New Jersey, where a demonstration is scheduled for Saturday, December 22, in front of the state house in Trenton, to show that “the people are in control of democracy, not corporations.” At the national level, a Yellow Vest United States Facebook group has also been created to encourage rallies. The creator of the group did not respond to our request for comments.

The emergence of gilets jaunes in France coincides with a renewed interest in the United States around ideas traditionally associated with the left, such as increasing the minimum wage, universal medical coverage, and the fight against inequality. There is “a deep feeling of injustice among the working classes in France and the United States and more broadly in the rest of the world,” the researcher CNRS Julien Talpin told French Morning in early December.

“I like the idea of the working classes coming together. When I heard about the movement on Facebook, I thought to myself, when do we start it in the United States?” said Jesse Ehrnstrom, who started the New Jersey group. An American, he travels three hours by car every day to work in a dispensary because he has not found a job near his home.

For this supporter of the “socialist democrat” Bernie Sanders at the 2016 presidential election, the situation of the working classes in France and the United States is similar. “In both countries, there’s a very large income disparity. The middle class is getting poorer and poorer. It’s becoming increasingly difficult for people living in poverty to get out of poverty.”

For the time being, these “Yellow Vests” acknowledge that mobilization will be difficult in the United States. The groups created on Facebook have only a few dozen members at most. Fortelny puts this into perspective: “I hope it will make you think. Thanks to Trump, Americans are more awake. Change is coming. I don’t know if we are ready for a movement like the gilets jaunes, but there will be a similar movement in the United States. We just don’t know how it will look yet.”

If the movement isn’t widely exported, the French gilets jaunes will have already achieved at least one thing in the United States: changing the debate around the creation of a carbon tax, an idea that is in vogue in environmental circles and among some legislators. It was the announcement of a fuel tax increase that triggered the movement in France.

For Kate Aronoff, an environmental journalist who writes for the investigative website The Intercept, the French movement shows that “the way forward is not a collection of neo-liberal measures as defended by Macron or figures here like Michael Bloomberg. This shows that any climate policy must invest massively in improving workers’ lives. Otherwise, it will fail,” she said at a conference held at the Verso Bookstore in Brooklyn on Monday, December 17. “If a center-left government came to power in the United States and introduced a carbon tax, there would be some form of protest, in part because workers’ lives are always difficult.”