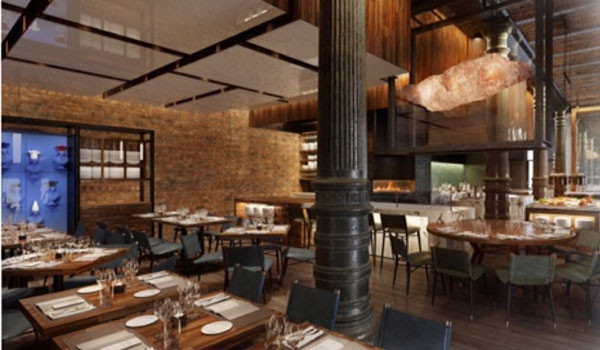 When two French chefs undertake to open a new restaurant in Manhattan, it may not seem like big news at first. But Louise Vongerichten, daughter of the famous Jean-Georges, and Didier Elena of Essex House fame aren’t just continuing a storied tradition of haute cuisine — with their newest project they are hoping to reinvent it.

Introducing Chefs Club, a restaurant where the familiar one-great-chef-opens-a-series-of-restaurants model is turned on its head. Here, culinary masters rotate in and out of one location, and with the changing of the guard obviously comes major changes in choices of fare.

The first version of the restaurant went live in Aspen, Colorado in 2012. A collaboration between Vongerichten and Elena, a Belgian investor and Food & Wine, chefs that were invited were chosen by the magazine and have included winners of the prestigious “Best New Chefs” prize.

Pleased with their Aspen adventure, Vongerichten and Elena are ready for the big time. Work on the new location on the first floor of the Puck Building in NoLita is almost finished, with an opening date set for mid-October. The first four guest chefs have been announced: Lachlan Mackinnon-Patterson (Boulder, CO), Gabriel Rucker (Portland, OR), Linton Hopkins (Atlanta, GA) and Erik Anderson (Nashville, TN).

60% of the menu will consist of invited chefs’ offerings, with Dider Elena providing the rest. “Besides their contributions to the menu, the chefs will come train the kitchen staff in their methodology and several times a year will spend several days preparing menus that are 100% their own,” says Elena.

The four invited chefs will change each year and in between other chefs will come for shorter stints, sometimes cooking in the “chef studio” where just 20 lucky diners will eat in close proximity to the talent in question, allowing a “more direct relationship between the chef and his customers.” Several French chefs are lined up to bring their cuisine to NYC, including David Toutain, Gilles Epié, and Alexandre Couillon.

Chefs Club may have all the elements to make a New York foodie’s mouth water, but fresh from the Aspen adventure, Elena says he’s wary of intellectualizing the experience too much. “We want to make an opportunity for exchanges and experiences around cooking,” he says, “but above all we want to make a restaurant where people can come have an excellent meal.” A bigger bet is whether cuisine from different chefs’ unique universes can come together for a harmonious experience. “But that,” says Elena, “is my job.”