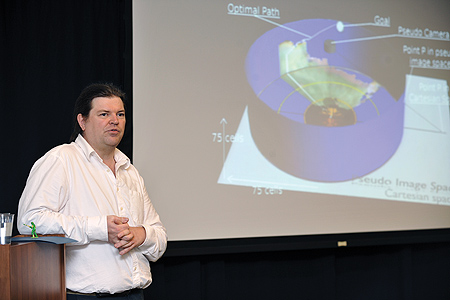 When Yann LeCun’s son learned that his father was chosen to be the director of Facebook’s first research laboratory dedicated to artificial intelligence, his response was somewhat resigned. “That’s it,” he said, “my dad is cooler than I am.”  Mark Zuckerberg made the announcement at a meeting of researchers on December 9th, and Yann LeCun promptly shared the news — on Facebook, of course.

LeCun, a 53-year-old Frenchman who is a self-described “geek” has been teaching and conducting research in computer science at New York University since 2003. He’s a world expert in the field of AI known as “deep learning,” which is dedicated to creating a machine that can understand language, recognize people or places in a photograph, and get to know peoples’ likes and tastes. The goal is to create a system that can automatically make decisions based on such information.

“Facebook already has many researchers, but they are mostly in applied research. With this lab, there’s an ambition to do high-level research over the long term. That’s what drew me. Facebook wants to get to a broader understanding of its users and multiply its current possibilities,” explained LeCun.

The new director will take up his post on January 1st, 2014. “About ten researchers have been recruited and the team will grow in the coming year,” he said. Mark Zuckerberg himself recruited LeCun, who describes the brains behind Facebook as “someone who’s very intelligent and dedicated to his cause. “He’s very invested in this laboratory project. The fact that he came to speak to a meeting of researchers, where CEOs never show up, is not insignificant.”

LeCun, a father of three, plans to continue to reside in New York and to work part-time at NYU, while traveling between Facebook offices in London, the Big Apple, and the site’s headquarters in Menlo Park, California. “Thank goodness I live on Bleecker Street, next to NYU and a few blocks from Facebook’s offices. That’s going to help,” he says with a smile.