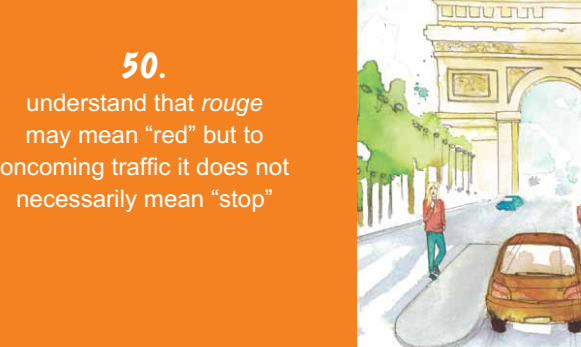 Am I French yet? Book Offers 90+ Answers

Not quite a cultural guide and not an academic work, 90+ Ways to Know You’re Becoming French is more of a fun-to-leaf-through listcicle (remember when they used to all come in book form?) aimed at people who probably already suspect they’ve crossed over.

The book is illustrated with charming watercolors that aren’t quite caricatures of French life. The info was written by seasoned American expats — Sciences Po English teacher Shari Leslie Segall and FUSAC founder Lisa Vanden Bos — and it shows. If you’ve ever lived for a time among the French hoping to fit in, more than a few of them are likely to make you laugh out loud.

So how do you know whether you’ve been Frenchified? The answers are by turn useful (“run to the pharmacist, not the doctor, for the small stuff.”), infuriating (“no longer allow yourself to wear sneakers on your commute no matter how much your feet hurt”), and for those who have truly been there, comfortingly familiar (“always have an alternate route planned in case of transit strikes”).

Got francophile friends or French majors graduating in the spring (or who’ve been abroad for years already)? 90+ Ways… is a good way to give them a chuckle — or to inspire them to share one of the 90+ funny French stories they surely have filed away in their own memories.

Curious to know whether you’ve crossed over? You might have become French if you…

3. start a series by counting with your thumb (as opposed to your index finger).

9. succumb to the verity that the way to get what you want from the policeman, clerk, passerby, receptionist, help desk, is to excuse yourself for disturbing them — no matter how ferociously you’ve heretofore resisted this humiliation.

38. ask for les toilettes and not la sale de bain. (You would be told, condescendingly that you can’t take a bath here.)

53. think that four consecutive weeks off in the summer is not only normal but way not enough.