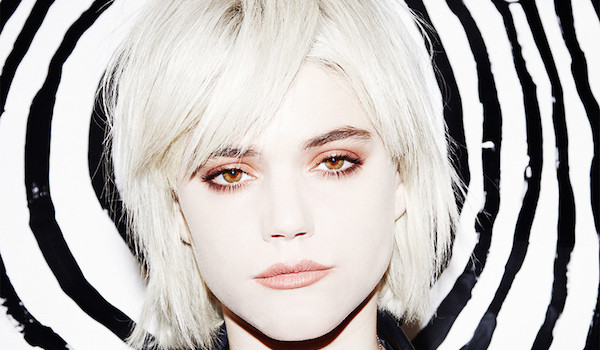 Finger-writing in the sand on dark beach serves as the opening title of SoKo’s haunting video “We Might be Dead By Tomorrow,” from her latest album My dreams dictate my reality. From there, we see the tender, escalating embrace of a young couple while a quiet, persistent guitar melody and a gentle but earnest voice introduce the premise, “Give / me all your love now,” she sings, “’cause for all we know / we might be dead by tomorrow.”

“The album has a very real, very vulnerable tone,” the ultra-talented 28-year old SoKo says of her latest effort. With 3 albums and 11 films under her belt, Stéphanie Sokolinky is something of a prodigy. Angelino for the past 3 years, the French singer spoke with French Morning at her publicist’s office on Sunset Boulevard. A few minutes into our interview she surprised me by grabbing and cuddling a teddy bear she finds near by and asking in a little-girl voice, “Can I take it home?”

SoKo greets with a hug, not a “bise”, and in a yellow sweater, baggy jeans and a cap over her peroxide locks, she has a look to match the less dark, more rock feel of My dreams dictate my reality — even if her legendary melancholy comes through in her latest lyrics. “I suffer from Peter Pan syndrome,” she explains, “I lost my dad when I was five and I grew up too quickly. Not many kids experience death so young. It forces you right away to see the world differently.”

SoKo was 16 when she left her family in Bordeaux to start a career as an artist in Paris. “I had a crisis at 25,” she says, “I realized that I didn’t want to be stuck in a world of adults. Now I want to have fun all the time.” Last October, SoKo gave a concert at a yoga studio in Brooklyn where she sported a live rat on her shoulder and played some songs topless, joined by a few of her fans.

But that apparent insouciance is just the lighter side of an artist who is a self-described control-freak, completely committed to her art. “I don’t like to delegate so I send up doing everything from A to Z. I write, I compose, I act, I direct the music videos, I do my own album artwork,” she says before admitting, “Sometimes it’s too much. And I want to stop everything.”

Her determination and creativity even extends to the nuts and bolts of getting her albums produced: last January without an American label to finance her new work, SoKo turned to crowd funding, offering fans nothing short of herself in exchange for their support: a pajama party (for 449 Euros), a home-cooked meal (1795 Euros), playing someone’s bride (45,000 Euros).

But perhaps her most daring move was to write to her idol Robert Smith, legendary singer of The Cure, to ask him to produce her album. In the end it was producer Ross Robinson, whom she asked to pass her letter on to Smith, who took on the project. “It was an incredible experience. Ross pushed me to go to the edge of my emotions. Before starting to record he had me analyze my texts, in order to break down barriers. Sometimes it was hard on my nerves,” says SoKo, “I had real panic attacks. But he was there to reassure me.”

While My dreams dictate my reality clearly benefits from SoKo’s emotional truth in dealing with her demons, the album itself doesn’t fall into the realm of the ultra-dark. “Its sound is closer to the 80s, to The Cure, it’s more folk, rock, with a kind of punk energy,” says SoKo. “I was tired of the sad and depressing feel of my previous albums.”

Maybe Los Angeles has something to do with it. “In Paris when I go back I’m so bored during the day. Everyone is at work from 9 to 5. In L.A. I don’t have any friends with office hours. Here, people don’t get trapped by routine. People dare to go after their dreams.”