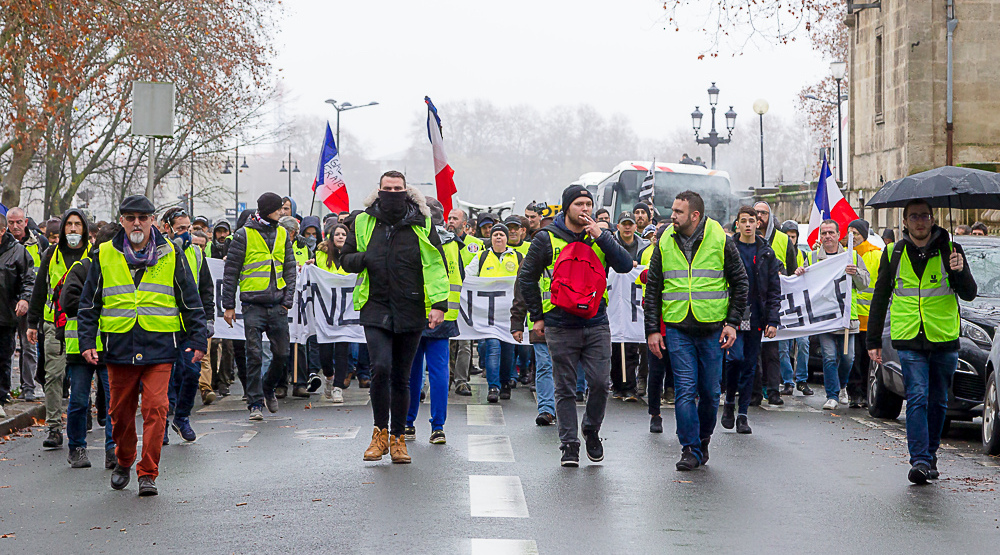 These Are the French People in the U.S. Supporting the Gilets Jaunes

Jérôme Bertrand has been based in Austin, Texas, since 2016, but that doesn’t stop him from closely following the gilets jaunes (yellow vest) movement, which has been going on for over two months in France. This engineer is one of the French expats residing in the United States who support the demonstrators. And it doesn’t matter if an ocean separates them.

“Emmanuel Macron is trying to implement reforms that will align the French social model with the American social model and I don’t want it. This is what’s happening with pension reform, which is taking on the American system. Supporting the gilets jaunes is for me a way to force the government to reconsider,” he says, “proud” to see that the French movement has inspired Americans to mobilize as well. “It’s frustrating to not be in France, because I would have liked to go to the protests. But at the same time, when I see police violence, it’s more comfortable to see the demonstrations from a distance.”

Being pro-gilets jaunes and living in the United States may seem incompatible to some people. And yet the movement has been met with a (small) echo here, where it has been praised by both right-wing figures (including Donald Trump on Twitter) and socialist activists. Bertrand is far from being the only Frenchman to be tempted by the call of the protests. For Alain Braux, a pastry chef and well-known nutritionist also in Austin, Macron must resign because he’s “selling France to international bankers and we’re risking bankruptcy”.

“I’ve lived in the United States for 40 years, but I am aware that if I were in France, I would be in the same mess. I would be a worker like any other and would be subject to taxes. I have always considered myself a laborer, so I feel the movement more than a person working in the high-tech sector,” he says. Because he can’t join the demonstrations in the streets, he helps the gilets jaunes by reposting messages on social networks and making financial donations. He participated in the controversial fundraiser for former professional boxer Christophe Dettinger, who hit a member of the national police force.

Pauline Schneider, a teacher in San Francisco, California, began supporting the movement from the very first call for a rally in Saint-Nazaire at the end of November (which was seen more than a million times in two days on Facebook). A self-proclaimed “personne militante” (a fiercely engaged person), “I find it interesting that people seek to re-appropriate a word. I’m used to demonstrations, but in the case of the gilets jaunes movement, many demonstrators are people you don’t often see in movements,” she says. Around her, in Berkeley, several French people support the movement and “most Americans I know are also open to discussion and are interested in the movement.”

Every day in the late evening, Mayëline Brissac, a nurse who has lived in Humble near Houston, Texas, for five years, watches the news on TV to keep up to date with the movement as a way of not letting go of “these people,” the ones we have forgotten. “Retirees do not have to suffer this fate, it is a real social injustice. The unemployment rate is obscene, we need to restore market fluidity.”

In 2017, Macron earned more than 92% of the votes in the United States during the second round of the presidential election. Anne-Marie Marabin, who has been living in Houston for almost seven years, is one of the French people who voted for him. Almost two years later, she’s supporting the gilets jaunes and feels that the president had made mistakes. “He doesn’t understand how the State works,” she says. However, she would like her compatriots to “learn” to reinvent themselves, but when she talks about this in front of her friends in France, she is told that her status as an expatriate keeps her on the outside: “you can’t understand,” they tell her. So, uncomfortable, she avoids talking about it with her family.

Sébastien Cappelier, a teacher in Washington, D.C., was “seduced by the fact that it was a citizen movement that had not been taken over by the unions.” “The original gilets jaunes movement, the one I support, started with the people struggling to keep their heads above water. I thought the fight was fair, we have too many taxes in France. I shared their demands, because I think it is legitimate to want to have a better end of the month,” said the expatriate residing in the United States since 2009. “These are questions that are quite far from our daily lives here in the United States, because we’re not directly affected by the movement. There is a certain distance that allows us to engage in toxic debates.”

“Even if I no longer live in France, I remain French,” Bertrand concludes. “I intend to return one day, I have a family and I am a citizen. I also have a duty to vote, but democracy does not stop at a vote.”