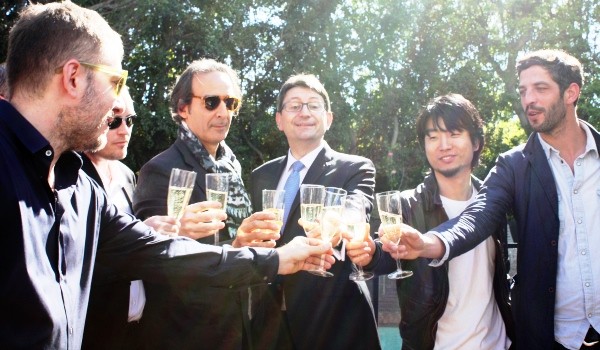 French Oscar Nominees: Tired and Happy at One More After-Party

Even after a long, fun-filled night of after-parties, the French Oscar nominees gathered once more alongside about a hundred other lucky guests for a fête at the Residence of the French Consulate in Beverly Hills.

Of course the star of the afternoon was French composer Alexandre Desplat who had two oevres in the running for Best Original Score this year and ended up winning for the music he composed for The Grand Budapest Hotel. His other nomination was for The Imitation Game.

“I am very happy. It’s the first time I’ve won an Oscar,” said Desplats who had already been nominated 7 times before this year’s ceremony. “It’s such a rare and exceptional award and so hard to win! It’s a real reward from your peers,” he told French Morning. Great directors in and outside of Hollywood have vied to work with the composer who created the soundtracks for Godzilla, The Tree of Life and The Beat that my Heart Skipped (De Battre Mon Coeur S’est Arrêté).

Besides Desplat, Mathilde Bonnefoy, who worked on Best Documentary Citizenfour, also enjoyed a great Oscars night as did Damien Chazelle, whose film Whiplash took home 3 statuettes. But in a year with many French co-productions in the running for awards, there were relatively few wins. One star whose absence was keenly felt was Marion Cotillard who was nominated for Best Actress, a prize that went to veteran American actress Julianne Moore.

Others whose hopes were dashed included young Chinese director Hu Wei  whose Franco-Chinese collaboration “Butter Lamp” was up for Best Short Film. “I am disappointed, ” he admitted while waiting in line for colorful macarons and French cheeses. “I’m already working on a new short film, though. It’s another collaboration with France. It’s pretty experimental with just one character,” he said adding somewhat mysteriously, “We’ll be shooting in the forests of Canada and the US.”

Behind Hu Wei, stood David Rosier, the producer of the Italian-French-Brazilian collaboration The Salt of the Earth (nominated for Best Feature Documentary) chatting happily with an American actress, “I played the young woman Ika in The Quest for Fire (La Guerre du Feu),” Rae Dawn Chong explains proudly. “No way, that was you? I love Jean-Jacques Annaud!”

For some, Oscars night was clearly very tiring. “Ok, this party I think is really the last one!” exclaimed Jon Bloom, whose role as a governor of the Academy Awards was made clear by the lapel pin displayed on his jacket. “After this I’m going into hibernation until the next Oscars.”

“Among the French nominees, I would’ve liked to see awards go to “Butter Lamp” or The Song of the Sea, a really beautiful animated film,” Bloom continued quietly as the crowd prepared to listen to Consul de France Axel Cruau give a brief speech.

“2014 was a big year for French cinema in the world. 13 films or co-productions were presented for the Oscar for the best Foreign Language Film,” Cruau reminded the crowd of journalists and industry professionals before naming each of the nominees and raising a glass of champagne in their honor.

The director of the highly-acclaimed Franco-Mauritian film Timbuktu also addressed the gathering. “We were very honored to receive seven Césars last week,” said Abderrahmane Sissako, “We were already so happy when we arrived here that we can’t help buy continue to be happy!”

The director, whose film tells a story of resistance by the people of Northern Mali in the face of jihadist violence, finished his remarks on a hopeful note, “There is no war between civilizations,” he said,”Timbuktu proves that. The world is magnificent. Let’s believe in the world and steel ourselves against fear.”