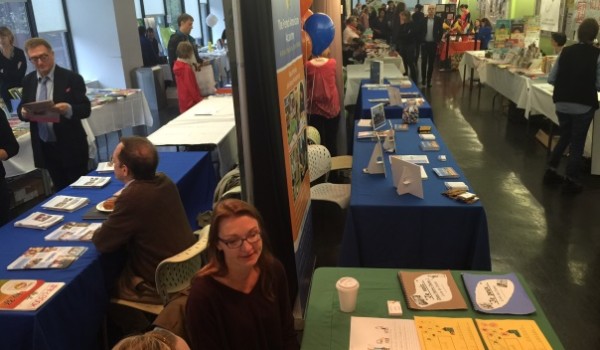 Over 1000 people came out to Hunter College on Saturday for a bigger, even more international edition of French Morning’s Bilingual Education Fair. Among the throngs of language enthusiasts were many parents — and future parents — interested in raising their children to speak more than one language. Eighty exhibitors turned out to present their services, wares and schools representing twelve nationalities.

The fair took place at a time when New York’s bilingual education commitment is stronger than ever: in January New York Department of Education Official Carmen Farina announced her plan to launch 40 new bilingual public school programs in 2015-2016. The initiative is in response to a growing demand from New York parents intrigued by the cognitive benefits and the professional advantages that bilingualism can offer.

Monica, a mother of two children ages 8 and 5 came to the fair to “discover schools and spend a fun day with the family.” She’s Italian and married to a Frenchman. The couple arrived in New York at the beginning of this school year and put their kids in the French-English program at the International School of Brooklyn. “For the moment their French and Italian is really good. English is still a challenge. But I’m not worried,” she says.
Frédérique from Jersey City brought her two 9-month-old and 2-year-old sons the the fair. “We don’t have the money to put them in the Lycée Français, so we’re looking and mostly focusing on bilingual public school programs. It’s really hard to get a space in some of them so I want to know what their selection criteria are. We are considering moving to be closwe to one of those schools,” she explains.
She and her husband are both French but she says speaking at home is not enough, “I have many friends in that situation and the result is that their children speak French but they don’t know how to read or write it. If we go back to France in 10 years I would like for them not to have those holes in their knowledge.”

Pierre came to the fair with his 4-year-old son Elias who is already trilingual thanks to his American school, French father, and Danish mother. “We would like for him to be in a French-English program, but since we live on Roosevelt Island it’s not easy. We’re thinking of moving,” explains Pierre who works at the UN. “For us it’s very important that he learn French because we won’t be in New York forever and he’ll probably continue his education in the French system.”

Experts at round-table discussions shed light on various aspects of bilingualism, including language acquisition in children with learning differences and bilingual education in a single-language household. It was the perfect resource for curious parents to get fast and authoritative answers to their questions.

Gretchen Schell, ESL teacher at the Lycée Français of New York, spoke of situations where expat children refuse to speak the the language of their host country. Early childhood language expert François Thibaut reminded parents that the very first years of life are essential to raising future bilingual children.

French Morning hopes to see you at the 2016 edition of the Bilingual Education Fair!