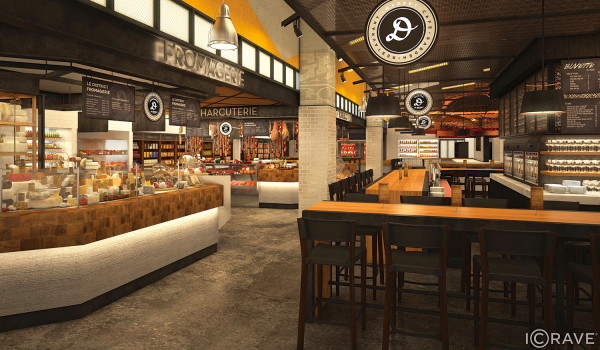 There’s nothing like a French market – the vibrant, colorful stands, the witty banter of master cheesemakers… Feeling nostalgic?  Then you won’t want to miss the opening of Le District, a new French marketplace that will open its doors to foodies in December 2014, just a stone’s throw from Wall Street.

Le District will be an upscale version of a Parisian marché, a cross between Eataly (the famous high-end Italian food market on Madison Square Park) and the Grande Epicerie (gourmet market) at Le Bon Marché.  The project is part of a $250 million project known as Brookfield place, formerly the World Financial Center, across West Street from the World Trade Center site.

Located at 225 Liberty Street, Le District’s 30,000-square-foot marketplace (including an outdoor waterfront plaza) seeks to reproduce the charm of a French village square.  “It will be comprised of four sections,” explains Laurent Vasseur, Director of Operations at HPH, a company that manages 25 restaurants in New York and landed this development contract a year ago.

“The café section will include an espresso bar and a series of vendors selling macaroons, French pastries, crepes, financiers (small, rectangular French almond-based cakes), etc.  The market section will boast a variety of stands offering traditional fare such as cheeses, meats, rotisserie meats, fish and seafood, a delicatessen, a wine bar, among others.  The garden section will offer produce such as fruit and vegetables, as well as deli products and freshly prepared foods.  Last but not least, there will also be a large, bistro-style restaurant with seating for 350 inside and 100 for outside dining.”  What you won’t find at Le District are brand names or well-known logos; in order to preserve an authentic feel within the marketplace, all the stands will be managed by HPH.

“It’s more than just a market, we want to offer an experience, recreate a lifestyle,” points out Laurent Vasseur.  He imagines shoppers wandering from one stand to another, stopping to taste an oyster or enjoying a cup of coffee. Having visited markets around the world to draw inspiration, Vasseur is working on a card system that would entitle shoppers to tastings at a number of stands.  “I saw this concept at a covered market in Barcelona,” he says.

In preparation for the opening, Le District plans to hire 350 people to manage the stands and run the operation.  The marketplace will be open 7 days a week, from 6:30am – 2:00am.  “We would like to hire French people, if we can find them!  We also plan on setting up agreements with French hotel management schools.” Know someone who needs a job? Applications are being accepted now!