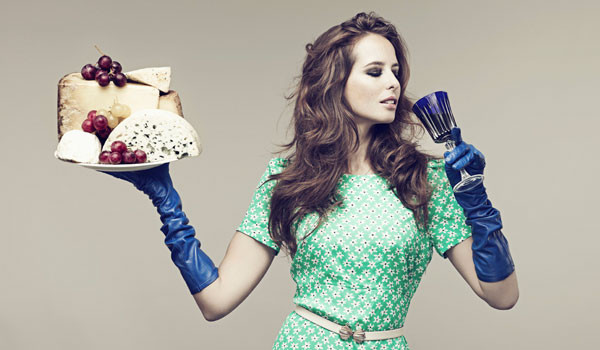 Whether you are a turophile (cheese connoisseur), a caseophile (cheese lover) or simply fond of fromage, you will revel at the perfectly presented rows of cheeses at La Maison du Fromage. On the shelves, the finest French cheeses such as comté, beaufort, roquefort, brie, mimolette, camembert, bleu d’Auvergne, Corsican cheeses, among others, were on display for the grand opening on Monday in New York.

The new space is located in midtown Manhattan and is sponsored by the Centre National Interprofessionnel de l’Economie Laitière, or CNIEL (France’s national dairy council). It aims to become the headquarters of French cheeses in the United States.

Customers will be able to purchase cheeses at a counter as soon as the space obtains its license (in about a month). La Maison du Fromage will also be offering cooking classes, conferences and tasting events starting in September. “There will be events scheduled everyday, and every two months a new exhibit will be presented,” stated a delighted Laurent Damiens, Director of Communications of CNIEL, who is also launching an advertising campaign in the United States.

This marks the first time that the CNIEL, which brings together all of the industry’s professionals, has opened a location abroad. “We chose the United States because it is the leading market for our members outside of Europe, and it is steadily growing. The French sell 20,000 tons of cheese to the US market every year, followed by Russia and Japan, who each represent 10,000 tons,” explains Damiens.

Even so, a little extra publicity certainly wouldn’t hurt. According to cheese manufacturers and importers – many of whom were present for the grand opening evening – even though the market is growing in the United States, French cheeses are far from becoming regular household or grocery items. “There is still much work to be done to educate Americans about the diversity of French cheeses and widen the base. Today French cheeses are mostly consumed within a circle of connoisseurs,” states Benjamin Carré from the Plasse company.

In this competitive market, advertising is the most effective weapon. “In order to maintain a competitive market share, we must have visibly in terms of communication. There is strong competition with the Swiss,” says Jorg Wotawa, in charge of exports for Ermitage cheeses.

Another reason to pay a visit to La Maison du Fromage is to see its current exhibit, Les Filles à Fromages (Women and Cheese), a series of large photos by Thomas Laisné. The photographs showcase beautiful, sexy women relishing cheeses such as a Saint-Nectaire, savoring a Mont d’Or or eagerly biting into a Reblochon. The women notably include journalists Maya Lauqué and Elizabeth Tchoungui, as well as actresses Alexandra Gentil and Julie Boulanger.

Mounia Briya, restaurant owner and co-founder of the Cercle Officiel des Filles à Fromages (Official Circle of Women and Cheese), created the exhibit which was presented in Paris in the spring as well as in Tokyo. “We want to show Americans that cheese can be sexy and glamorous; that it is not necessarily fattening if it is consumed in moderation. We also want to promote this French expertise, this exquisite product that demonstrates our richness and diversity.”